As any of you paying attention know, Christopher Nolan, long mysteriously compared to Stanley Kubrick, had Warner Brothers strike a new 70mm print of 2001: A Space Odyssey from the original camera negative and brought it to Cannes to celebrate its 50th anniversary and, presumably, to endure it being booed by half the crowd. Which is how I understand Cannes crowds roll.

Lucky for those of us unable to jaunt off to France for film festivals, the new print (or, perhaps, prints) is (are) touring the country.

Included is the Castro Theater in San Francisco, where it’ll be playing over Memorial Day weekend for those SF Bay Area denizens who missed the handful of screenings held there over the past few days.

I saw it on Monday. In a word, it’s glorious. It begins with this explainer:

For the first time since the original release, this 70mm print was struck from new printing elements made from the original camera negative. This is a true photochemical film recreation. There are no digital tricks, remastered effects, or revisionist edits. This is the unrestored film — that recreates the cinematic event that audiences experienced fifty years ago.

It’s a 2001 for hipster film-nerds! Damn you to hell, revisionist digerati scum! Give us your photochemical film prints or give us death!

It looks beautiful, it sounds beautiful, the colors are rich, the blacks are so black you could fall in and be forever lost, there’s nary a scratch to be seen, and when it shows at the San Francisco Alamo this July, I’m going to see it again. 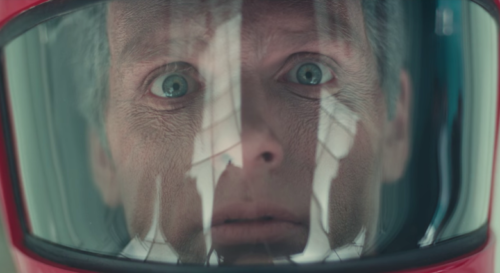 But is it better than all of those other 35mm and 70mm prints I’ve been watching at least once a year for the past twenty-five years?

Tough to say. What I can say is that this new print is new and in 70mm and so pretty I want to take it home and curl up in bed with it and whisper sweet nothings into its perforations. Also, I can say that it’s noticibly different. What I can’t say is precisely how it’s different. It just feels that way. The colors, overall, feel unlike I’m used to, in very subtle ways. Or at least in some places they do. Without a side-by-side comparison, it’s not easy to say exactly what’s going on here.

Oh, what’s that? Someone made a side-by-side comparison of the 2007 blu-ray and shots from the trailer of the anniversary print? Great. Here it is:

Granted, this is on a computer, with shots taken from a trailer, so it may not be an exact reproduction of what the print looks like, but what it suggests isn’t surprising, is it? The 2007 version leans heavily into cool blues, sharpness, and high contrast. Just like every new movie made in the past twenty years. Whereas the unrestored version looks like a movie of its era, rather than of ours. The whites aren’t blue, there’s greens and yellows, and in some sense it feels more welcoming to my eyes. “Come on in, eyes! Put your feet up. Have a drink. We’re going to be here awhile.”

As for past prints floating around, who knows whence they came and when they were struck? I’ve seen 70mm prints over the years advertised as “newly struck.” Which negative did they use then?

For the present, none of that matters. What’s important is that this beautiful print is out there, if you’re lucky you live somewhere you can see it, and meanwhile there will no doubt be releasing a blu-ray of this version. I think, given the blu-ray comparison above, that I like this unrestored version better. I’m awfully sick of the obsession with blue, sharpness, and high contrast that typifies current digital cinematography. I like the softness of film, and I like colors other than blue. And orange.

Another thing about this unrestored release is that it’s been publicized enough that people are actually bothering to see it. On a Monday night in San Francisco, the Castro was unusually crowded. 2001 plays there every year, I see it every year, and I’ve never seen a crowd this big. And on a Monday.

A guy sitting two seats over from me, clearly not used to seeing movies all by his lonesome, was feeling the need for pre-show chatter. “Ever seen this before?” he asked.

“First time. I read the book, though.”

“Wait, what? There isn’t? I read it in high school and don’t remember a thing. I think you’ll like the movie.”

He was fifty-ish. Don’t think he sees much in the way of movies. Aside from Ready Player One. Said he liked the book better. When a pre-show slide came up advertising the coming-soon double bill of A Fistful of Dollars and Dirty Harry, and I recommended it to him, he said he’d never seen either one. “They’re good,” I opined.

“What’s that first one? Never heard of it.”

“A western. An Italian guy directed it. Great music. Actually, it’s the movie that made Clint Eastwood famous.”

“Dirty Harry…is that the one where he says ‘Make my day’?”

“Not quite. That was one of the sequels.”

“I didn’t know they made sequels back then.”

“Oh yeah, right. But that doesn’t count. You know what, maybe I will see those Clint Eastwood movies.”

“Haven’t seen a double feature since I was a kid. Actually, no, I came here, to the Castro, this one time a few years ago, and after the first movie I walked out, because I didn’t know if I had to pay for the second one. You remember double features?”

At intermission he kept talking.

“I’m not used to movies being so slow.”

“You just have to let it take you where it wants to go. Things get a bit crazier in the second half.”

“So, you’ve seen this movie a few times?”

“I see it whenever it plays here.”

“That takes some serious commitment.”

“Well, not so much. It’s just a movie I like. I like watching movies projected on film, and I can only do that in a theater. This theater, mostly. 2001 isn’t the same on a television.”

As the credits rolled I said, “What do you think? Not bad, is it?”

“Yeah, but what does it mean?”

“That’s the part you have to figure out for yourself.”

Walking out among the crowd, I overheard a lot of comments of the “what the hell was that?” variety from many who’d obviously never seen 2001 before. This is a good thing. That they finally saw it, and saw it the way it was meant to be seen, and that they were left feeling confused and tripped out and mystified and not at all sure of what they’d just witnessed. I’m guessing this is exactly how audiences felt 50 years ago.

2 responses on “Let’s Take a Look at the 50th Anniversary Unrestored Print of 2001: A Space Odyssey”