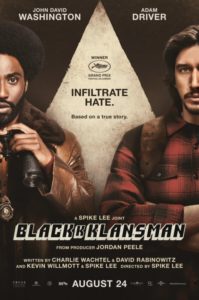 I did not expect to leave BlacKkKlansman, Spike Lee’s latest joint, in tears. I didn’t even know if I’d like it. Spike Lee’s movies, while (almost) always interesting, haven’t done much for me since Do the Right Thing way back in ’89 (which I loved then and love now). BlacKkKlansman broke that streak wide open. It feels like a culmination for Lee, a melding of his more straightforward Hollywood movies and his preaching-from-the-soap-box, fist-shaking cries for justice.

Based (loosely, in various ways) on the true story of Ron Stallworth, who, as the first black policeman in Colorado Springs, called the local Ku Klux Klan one day pretending to be a white supremacist and asked to join up, the movie is both a period piece and a damning indictment of today’s America. Which is a neat trick, and in Lee’s hands, not a subtle one. It shouldn’t work, this marriage of current events to a story set in the ‘70s, this often humorous, buddy-cops in a small town story sandwiched between outtakes from Birth of a Nation and Gone With the Wind on one end and footage of Donnie Trump and Charlottesville on the other. Lee mixes tones, mixes eras, ignores anything like standard Hollywood pacing, throws in a moving sidewalk shot and various other of his familiar cinematic tricks, yet instead of coming up with what he often comes up with—a unique but all-over-the-place movie that fails to catch fire—he’s made one of the most striking movies of his career.

Lee rewrote the script by Charlie Wachtel and David Rabinowitz with Kevin Willmott, with whom Lee wrote the odd, messy, uneven, wild, and unique Chi-Raq, with the purpose of turning what began as a standard period piece into a powerful commentary on our current state of affairs. It didn’t take much to connect the dots, I’d say. Have your ridiculous Klansman shout about taking America back and making it great again, and there you are. It’s simple and direct, but in this movie, it works. 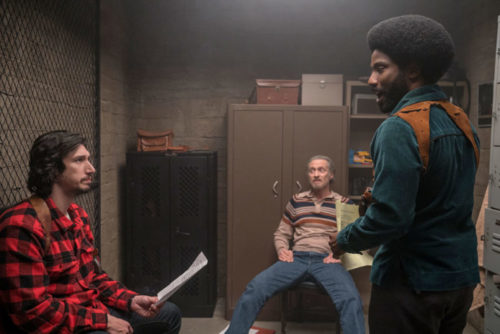 John David Washington (Denzel’s son) plays Ron Stallworth, whose one bonehead move during his first phone call to the Klan is telling them his real name. He arranges to meet these good ol’ boys, but since he obviously can’t go himself, another detective, Flip Zimmerman (Adam Driver), goes in his stead. Turns out Stallworth is an expert in talking like a white man.

Serious as this business is, a lot of it is played for laughs. As well it should. Klansmen are ridiculous human beings when they’re only talking about the shit they talk about. Best—and funniest—of them all is Grand Wizard David Duke as played by Topher Grace. He’s Topher Grace, for starters. You can’t really take him seriously as the deadly leader of a gang of would-be terrorists. Grace plays Duke as a bland, credulous idiot. His many phone conversations with Stallworth convince him to travel from Louisiana to be a part of Stallworth’s induction into the brotherhood.

Alongside the funny scenes of Klan infiltration are serious scenes of ‘70s black awakening and political activism, prime among them a speech to the black student union by Kwame Ture (AKA Stokely Carmichael), which Stallworth attends undercover, wearing a wire. No one but Lee would have Ture’s speech last as long as it does, cutting to listener’s faces as they emerge leaning in from the darkness. Stallworth may be there on assignment, but he’s no less fired up by Ture’s call to self-actualized arms. It’s a stirring scene. No less so is another, late in the film, featuring Harry Belafonte as he recounts the horrifying (and true) story of the lynching and burning of Jesse Washington in 1916 Texas. 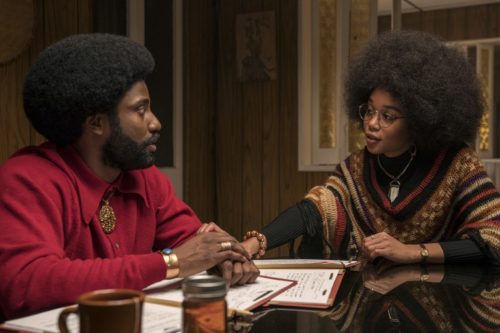 Stallworth asks out the leader of the student union, Patrice (Laura Harrier), though his background is as an army brat, not a political activist. Patrice isn’t keen on the Man, calling all cops “pigs,” not knowing she’s drinking with one. The two go out dancing in another sequence that no one but Lee would allow to go on for as long as it does.

The pacing is so odd in BlacKkKlansman, like it’s in no hurry to get anywhere. It contains the elements of a standard story of this kind, then stretches them out, speeds them up, intercuts them with polemical asides, and does so in a way that feels natural. BlacKkKlansman is, then, a melding of the Lee who made Inside Man and the Lee who made Chi-Raq.

The dramatic climax of the movie takes place at the ceremony where Zimmerman—as Stallworth—is inducted into the Klan by Duke, while Connie (Ashlie Atkinson), wife of a Klan member, having been tasked with planting a bomb at Patrice’s house, goes ineptly about her business. This is followed by what at first plays as a baffling, almost sit-com-like coda in which Stallworth and the other officers entrap their one super-racist co-worker and have him arrested. It’s the kind of moment you’re supposed to cheer—yeah! The racist cop got his comeuppance! But it comes out of nowhere, with no set-up whatsoever. It’s just this sudden, everything’s-gonna-be-okay-now kind of scene you expect to see in far less original films. 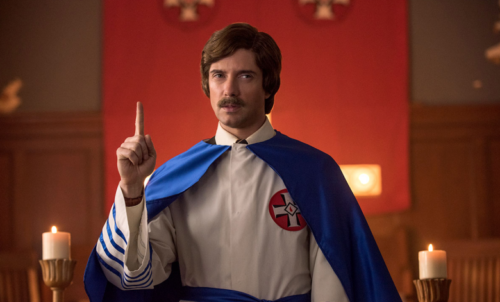 This is followed by the expected downer of the Chief telling Stallworth and the others that their Klan work is over. Yes, it feels like political word must have come down from on high. Alas, such is the way of the world. Since you can’t end this kind of movie on such a down note, we next see Stallworth on the phone with Duke, owning up to who he really is, and laying into him. A real first-pumping moment—everything worked out great! I think we’re all gonna be fine, everyone. Or no, wait—

Suddenly we’re watching actual neo-Nazi shitheads marching in Charlottesville, a car barreling into a crowd, chief piece of human garbage Trump explaining that plenty of good folks were out there marching with the fucking Nazi party, and finally David Duke in the flesh, still alive, still spewing hate.

And it’s devastating. You’ve seen these images before, but in this context they’re overwhelming, and it has everything to do with the levity of the movie you’ve just watched. The Klan is cartoonish. David Duke is a Topher Grace-like goof. They all got punked!

Only there they are, marching in real life, only one year ago, with their little tiki torches and swastikas, chanting and running people over, and their bloated, corrupt leader—in core beliefs if not actual Nazi party membership (but who knows?)—is the actual President.

The movie-happy ending of the racist getting arrested makes sense now—it’s there to off-foot you when the real ending kicks in. This is not the story of buddy cops beating those dumb country racists. What does Stallworth really accomplish, beyond making the Klan look like the morons they are? If anything, the movie is about Stallworth’s journey to realizing the scope of what he’s up against. He might have pulled one over on Duke, but meanwhile the Klan is out burning crosses. The message of the film is not “yay, a cop kicked the Klan’s ass.” The message is: It’s all still happening, nothing has changed since the Civil War (as depicted at the film’s beginning with a shot from Gone With the Wind), since The Birth of a Nation (which the Klan members watch one night, hooting and hollering with glee), since the social and political movements of the ‘60s and ‘70s, since yesterday. Or rather, despite all of the changes in the last 150 years, we’re still stuck in the very same place.

I didn’t expect to leave BlacKkKlansman in tears, but I did.