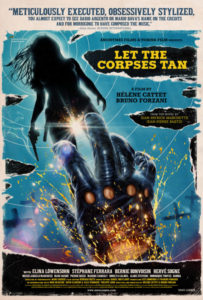 Let the Corpses Tan is what you might get if Quentin Tarantino infested Alejandro Jodorowsky‘s brain, like some sort of malignant zombie wasp, spinning time, perception, and reason off into the hallucinogenic aether.

So yeah, I kind of liked it.

On one highly-flattened level, it is the story of a heist gone wrong. A ruined villa along the Mediterranean coast serves as the wild residence of Luce (Elina Löwensohn), a transgressive, libidinous artist and her coterie of hangers-on — including a gang of armored car thieves who are using the rock heap and free spirits as cover. 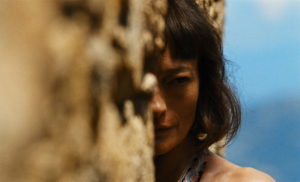 Complicating matters, a duet of motorcycle cops arrives to a welcoming fusillade of bullets. And then — also complicating matters — is the film’s near-complete lack of visual, temporal, and logistical clarity. For while, on that highly-flattened level, this a heist movie in which people betray each other and shoot each other and try to make off with the loot, it is also a movie shot in a disorienting series of close-ups (eyes, lots of eyes), in which people drift into unexplained, obscene artistic fantasies, and that jumps around in time so that you see events unfold as if wrapped in a stuttering drift of dirty waves.

What’s more, none other than Ennio Morricone spools out the film’s score. So if you didn’t twig to the Sergio Leone callouts with the ubiquitous shots of squinting eyes and dusty pans across arid landscapes, you’ll get it when Morricone’s chorus starts ruh-ree-rah-ing impishly.

But it gets tiresome. And after not too long, either.

Much of Let the Corpses Tan unfolds in short bursts of time identified by title cards (i.e. 16:32) but which are otherwise left adrift. Sequences string together a series of intentionally murky close-ups and images of things that may or not be fantasy. Cuts can fall quickly, leaving you to wonder just what you saw, who did what, and — not to put too fine a point on it — what in the everliving fuck is going on. 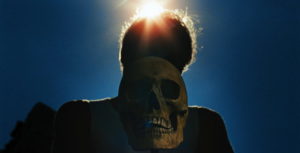 No, seriously. What the fuck is happening? It is no exaggeration to say that I not infrequently wondered if I’d just seen a major character die, but wasn’t sure which one. By the time Corpses comes to a close, I’d long stopped caring — partly because everyone was dead, but also because none of the characters was worth caring about.

It’s not that they’re all lousy people, although most of them are. It’s that I barely knew them. One was a cop. One was gang leader. Another: the kid, and so on. They mostly had guns. They mostly got covered in blood. And what it all amounted to was not much.

So yeah, I kind of didn’t like it. But I did boggle at it, and I am reasonably satisfied that I spent 92 minutes watching it. The fact that I’m still fuzzy on what exactly I watched only waters that down a tad. Not everything can make perfect sense and not everything means to. 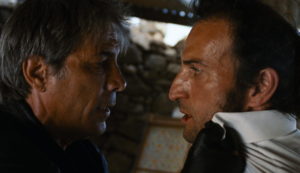 Choices were made. Those choices resulted in an art film that’s masquerading as a violent B-movie heist picture. Maybe the whole heist was just a feint and what the film really stole was your sense of value? Gold, after all, is just a pretty rock. You’d be much richer smoking a cigar, sweltering in a stone hovel, and dreaming of being lashed naked by a faceless horde of silhouetted men, amiright?

Watch Let the Corpses Tan if you want to. I can’t stop you and wouldn’t want to try.