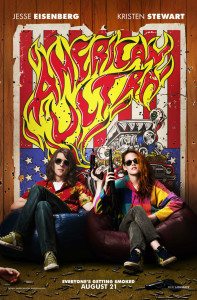 Sometimes a film works despite its flaws. Sometimes, even when its action sequences are wonky and its supporting cast mopes around like they just had their wisdom teeth removed, and its script feels as well polished as the undercarriage of a Soviet tank, well, you don’t particularly care. And that’s how I feel about American Ultra; i.e. not significantly, but more positively than anything else.

And I wasn’t even high.

In the film, Jesse Eisenberg and Kristen Stewart are both actually quite satisfying and amusing as a stoner couple who discover they are mixed up with highly trained government assassins. Walton Goggins — whose name you probably don’t recognize — is also fun as the psychotic killer named Laughter. Pretty much everyone else is either painfully typecast (Topher Grace), poorly directed (Tony Hale), under used (Bill Pullman), or John Leguizamo (John Leguizamo). 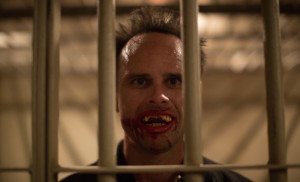 Walton Goggins, about whom I didn’t care least of all.

And hey! That’s Huell! I guess he’s still not hanging out waiting for Hank in some alternate Breaking Bad universe.

Still. Max Landis’ idea — stoner assassins — makes for good fun. Sure, he leans heavily on the genre tropes and misses the perfect end to his film by a few scenes; scenes that seem so tacked on we’ll just assume blackmail was involved, but I don’t care. Too bad, though, as that perfect ending was just sitting there.

I never saw director Nima Nourizadeh’s first feature, Project X, and based on this I likely never will. Instead, i’ll just feel pretty copacetic about killing a few hours watching American Ultra. 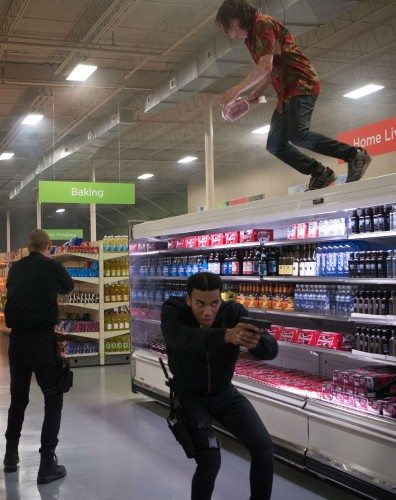 Look out! He has meat!

I mean, my other options were some video game movie or an action film staring Owen Wilson. That’s a joke, right? Hell. I just don’t know any more. They’re making films out of Disney rides and bad boardgames and I’m supposed to care?

American Ultra is mostly inoffensive and kind of fun. Watch it when it comes on cable late at night. Or don’t. Either way is just fine with me.