Gilda Radner is a goddamned legend. And like Hal Ashby — about whom a much better documentary is opening next week — she’s been neglected by the documentarians for too long. So yeah, you bet I’m going to watch Love, Gilda. 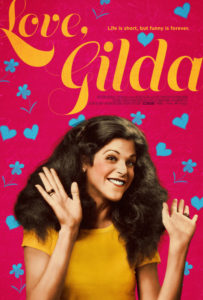 Which was a disappointment.

First, it moves too fast over too short a life to let you relish any of the woman’s ground-breaking comedy. You barely have a moment to remember the bit they’re excerpting before it’s on to something else. Second, while it bills itself as an inside peek at who she was by having her personal papers read by modern comedians, all of those papers were notes for her published book and they were all read by people who never even met her. The audio clips are likewise her reading her book aloud — not some newly discovered diary. And why do I care if Bill Hader is moved to touch Gilda Radner’s things? He might guess at what he and Gilda had in common, but it’s just a guess because he never met her.

Then, despite starting promisingly with personal recollections from Martin Short and Paul Shaffer, it mysteriously fails to talk to anyone whose opinion or insight you might be eager to hear. Not a word from Gene Wilder, or GE Smith (her first husband). Most of her original SNL castmates stay away, too, save a few asides from Lorraine Newman and Chevy Chase. Lorne Michaels pipes up, as does Gilda’s brother, and SNL writer Alan Zweibel, but it all feels like they’re dancing around a minefield. They’re talking to a camera about someone they don’t care to open up about.

Without that “why”, what’s the point?

In the end, you leave wondering more about who wasn’t included and their reasons for steering clear then feeling like you’ve celebrated or connected with Gilda Radner. Gilda fucking Radner! Was she messed up? Seems like it — in ways that commonly plague too many comedians and women. Was she one of the funniest people ever to live? Yes. Is there anything we can say about that? I guess not.

Spoiler alert: she dies. And while it’s nice to remember her and her talent, I think there are better ways to do it.