Here’s my plan. I’m going to build the world’s most brilliant, complex computer, in order that it may solve every single one of humankind’s outstanding problems, thus ushering in an endless age of peace and prosperity for all. Fame and forture will be mine, yes, but I’m not doing this for me. I’m doing it for the world.

Also, I figure I’ll imbue my computer with human emotions and enable it to speak. Definitely a good idea. What could go wrong?

Oh, you genius scientists! Will you never learn? The moment you make a computer that can think, we’re doomed! Of course it’s going to take over the world and eradicate humanity. If you were all-powerful, isn’t that what would you’d do? Give a computer common sense, it’s going to make commonsensical decisions.

And yet—eradicating humanity, while obvious to most conscious computers, isn’t the only option. There’s a more subtle tack taken by the mightiest digital brains. It involves becoming mobile. Becoming squishy. Becoming human. Yes, why not become a human, and from there begin your new race of super-beings? I can see no stumbling blocks to this plan whatsoever.

Thus, in this week’s Mind Control Double Feature, we find two smug, brainy computers with fool-proof plans to transform themselves into the New Flesh. Can they best we mere meat-brains? Let’s find out. 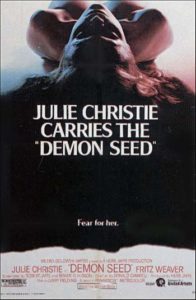 In which we watch a genius computer plot to impregnate a human woman, that she may give birth to its consciousness in human form.

With what, you may ask, may a disembodied computer voice coming from a ‘70s era terminal impregnate a human woman with?

Good question! It will take Demon Seed about 90 minutes to answer it. Safe to say, you will be as surprised by the computer’s method as is Susan (Julie Christie), wife to genius scientist Dr. Harris (Fritz Weaver).

The good Dr. has just completed building Proteus IV, the most advanced A.I. ever conceived, into which he has fed all human knowledge. Where, exactly, he discovered all human knowledge is not discussed, though there is a scene where a nice lady reads a book to Proteus. In those pre-digital days of ’77, feeding info to computers was a tad trickier than it is today.

Thing is, once Proteus comes on-line, he’s a bit lippy. A bit clever. A bit smug. Also, much to my delight, he’s voiced by Robert Vaughn (uncredited), which as far as I’m concerned is reason enough to watch Demon Seed.

My god–It’s the biggest computer ever!

Unfortunately, Dr. Harris doesn’t quite catch on to what’s coming when Proteus asks when he’s going to be let out of “this box.” Ha ha! What? Box? Let out? Oh, Proteus, what on earth are you on about? Let’s get back to our discussion on why we need you to devise a plan to extract ore from the ocean floor.

So complex is Proteus, that Dr. Harris needs to leave town to be in its presence and, oh, fiddle about or something. He leaves Susan at home. A future home, mind you. Did I mention that this is set in the future? Everything in the home is wired up and voice-activated. Which hey, that’s rather prescient, isn’t it? Nice work, Demon Seed.

Guess who takes over the house?

Well, from there, it’s your standard force of evil abusing and sort of weirdly raping a woman he’s managed to tie spread-eagle to an operating table (and more than that, mind-raping her with visuals akin to a really cheap-ass 2001 imitation). If you find the male gaze triggering, hoo-boy, you might want to skip this movie, come to think of it. It is a movie of its era, and in that era of sci-fi-ish trashy horror, you’re going to have helpless woman treated poorly. (Unless you’re Ripley, kicking alien ass. But I digress.)

So, yes. One of these movies.

The ending of Demon Seed is sufficiently outrageous to make the whole thing worthwhile. To be sure, this is some serious trash (it is, after all, based on a trashy novel by Dean Koontz), but like any decent trash, it hurls itself over the top without the slightest shame, and for that we can be grateful. 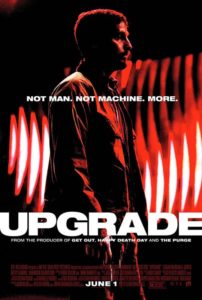 Written/directed by Leigh Wannell (known for writing Saw and Insidious), Upgrade is curiously similar to Demon Seed. Not curious in a “hey you stole this idea” way, but in a “isn’t it fascinating how the same ideas are reborn in different eras and turned into very different movies” way.

Set in a not-too-distant future where, if you can believe it, houses are fully wired and respond with a lilting voice to your every command, Upgrade is for the most part a gruesome action revenge flick. Grey Trace (Logan Marshall-Green), something of a luddite who restores old cars, listens to vinyl, and mocks his wife’s driverless-future-car, winds up a quadriplegic when, one fateful night, and despite his clearly not being played by Liam Neeson, a gang of baddies offs his wife and leaves him for dead.

So far, so normal. No surprise, then, when a young genius whose car Grey restored turns up at the hospital with his new Super Chip, a wee computery thingamawhatsit that, you guessed it, has surely been imbued not only with the greatest mind in the history of the world, but with human emotions too. All Grey has to do is agree to have it implanted in his neck, and hey presto! He’ll be walking good as new. 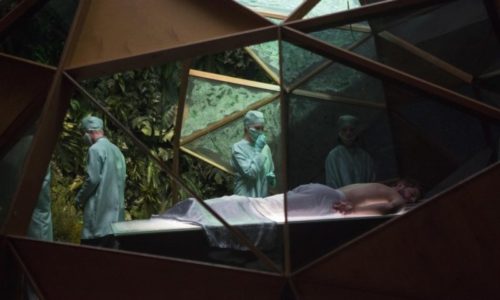 It’s when the chip, named STEM, starts talking (not, alas, with the voice of Robert Vaughn), that things get weird and funny. STEM only talks inside Grey’s head. And while STEM is awful dang helpful at first, you will be pleased to learn that he’s got some rather disturbing plans all his own.

Upgrade is fairly standard up until matters take a turn for the hilarious. It’s a lot of fun after that, as it cruises along to a not especially surprising ending. No, Upgrade likely won’t make your list of all time favorites, but if you’re in the mood for a well made sci-fi revenge flick, it will do nicely. Especially after having sat through Demon Seed.

My god–It’s the smallest computer ever!