Do you know how sometimes you go to see a film and you just completely lose yourself within it? How, for two hours or so, your world narrows to what’s on the screen and nothing more? Even when the film is unbelievable, fantastic, or ridiculous this can happen — it did on Sunday to a large degree when I saw The Kings of Summer. 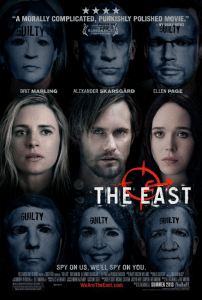 The reason I bring this up is because last night I saw Zal Batmanglij’s soon-to-be-released film The East. This eco-terrorist themed thriller puts you in Brit Marling’s perky shoes as she goes undercover with a potentially unhinged group of pseudo-culty, anti-corporate ne’er-do-wells. This terrorist group unites Alexander Skarsgard, Ellen Page, Toby Kebbell, Aldis Hodge and others so they can perform “jams” — performance art attacks in which big baddies are served up a taste of their own evil.

For the entire run of the film, there was never a single second in which I lost sight of the fact that what I was watching was a movie.

Every single element of The East combined to form an impenetrable barrier separating me from the pre-chewed world of the film. Now, I’m as anti-corporate as any good Berkeley resident, but I also recognize bull pucky when I see it. The East is bull pucky. 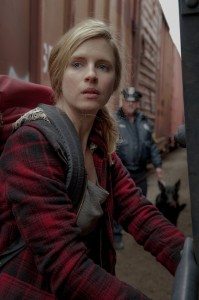 Is this the train to eco-terrorist camp?

I’m not saying that it’s a terrible film, because it isn’t. I’m not saying that the actors let themselves down, or the technical team bungled their jobs, or that Zal Batmanglij doesn’t know beans about entertainment — he must; you try to pronounce his name. What I’m saying is that The East is just a well-assembled jigsaw puzzle of a la carte elements, none of which make a meal on their own. Taken together, it’s almost as if you’ve had something to eat, or been given something to think about, or saw something worth your time.

I’ll give you some examples of what I’m talking about. On a basic level, this is a film about the struggle between individuals and corporate greed, but none of the individuals in the film are anything shy of archetypes. Brit Marling is the beautiful, over-achieving heroine with the perfect life. Will she be sucked into the compelling world of dumpster diving and holy vengeance? Naturally. Alexander Skarsgard is the charismatic leader who looks good scruffy. Ellen Page is emotional, driven, and motivated by a backstory so cut and dry you could start fires with it. Everything is just perfect. There’s the one African-American guy. There’s an overweight woman who does the group’s hacking. The gentleman of alternative sexuality gets his one kiss in. Check, check, and check. 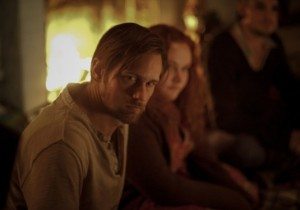 None can resist my smolder

I can see that I’m having a bad reaction to The East. It’s probably unfair of me, overly harsh. It also might have something to do with just hearing what Steven Soderbergh said about the difference between cinema and movies; cinema is the product of vision and movies are assembled by committee. I’m not sure I completely agree with him, but he is on to something there. The East feels made by committee. Time for an action sequence, so let’s do that. We need to establish Marling’s corporate-security boss (Patricia Clarkson) as evil, so let’s just have her say the most evil thing possible that doesn’t involve the words “kitten” and “napalm.”

And then the ending. Leaving aside the Tony (rest in peace) Scott closing credits montage that felt lifted straight out of Enemy of the State, we are spoon fed some pap that makes everything hopeful, presumably to motivate us to rise up over our corporate overlords and save the redwood whale vegan solar cells but more likely to keep us complacent. This is a film that spends most of its length trying to convince you that multinationals have such a fierce grip on the planet that the only thing that will shake them off in the slightest is nuclear winter. But should you actually do anything now that you’ve been so informed? No. Don’t worry. Brit Marling will save us with her fine blonde hair and determined stance.

The film looked like one of these modern thrillers looks, with pointless handheld shake, and moody colors. Some of the scenes were attractively composed, such as the misty entrance to The East’s safe house. Other scenes were scrawled in such ghastly shorthand I wanted to laugh. Really? Eco-terrorists playing spin the bottle? In what world can these people, living this way, be accepted as real? Where is the truth within them? 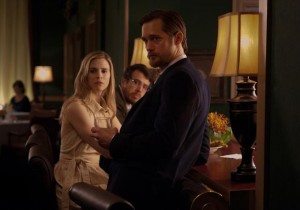 No one will see through our fiendish disguises

In the beginning of the film, Patricia Clarkson’s character sends Brit Marling’s off to join the hippie-thugs with a gift: a pair of Birkenstocks. It’s as if someone asked their mom what made green activists look like green activists and then they dressed Barbie that way and said, “there! perfect!” None of the activists were crazy, or motivated by anything verifiably human. Toby Kebbell’s Doc, whom I liked more than anyone else, had such a cinematic story driving him I half expected him to admit that he was also, by the way, the son of Jor-El.

And for a terrorist group their plans involved so little security Boss Hog probably could have found them. In one of their jams they invite themselves along to a friend’s father’s event, beat up the friend, spend the entire evening mingling without disguises, and then release a YouTube video claiming responsibility. Uh. Hm. I wonder who those mysterious East characters could possibly be?

This sort of oversight in plotting wouldn’t matter a lick if The East sucked you in to its world of corporate malfeasance and eco-revenge. In my case, it never did.

Perhaps its anti-authoritarian, hope for the masses message would have been easier to swallow if Fox Searchlight hadn’t surrounded the audience with rent-a-cops in night vision glasses? Nah. That’s a crazy idea.