Are the zombies in World War Z even zombies? Or merely disease-carrying jerks? Nerds across interwebworld are arguing the finer points. I’m afraid those on both sides of the argument are missing the forest for the trees. The problem is not whether to define WWZ’s zombies as zombies; the problem is that WWZ’s zombies are fucking boring.

you are boring me, zombies

When George Romero invented the modern zombie in Night of The Living Dead, what he found terrifying about them was their slow-moving mindlessness. They didn’t have to run. They only had to have numbers. They would overwhelm you. And also terrifying? They fucking EAT you. There’s something primally, lizard-brain-hard-wired, curl-up-into-a-ball-and-weep horrifying about monsters whose goal is to eat you alive. It’s why sharks are scary. And flesh-eating bacteria. And Marlon Brando. 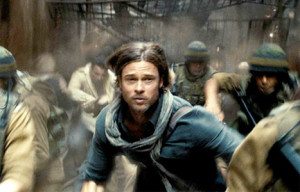 In World War Z, the latest late-to-the-party zombie flick, starring Brad Pitt as the best U.N.-guy-who-does-things guy the world has ever known, the zombies have been denuded of everything that makes zombies scary, aside from sheer numbers. First of all, they run. This kind of worked in 28 Days Later. It was different, at least. In WWZ the running is CGI-aided. It looks fake and wrong. The zombies run so fast you can’t even get a look at them. They’re essentially just jerky CGI blobs, millions of them, all herky-jerking their way around, biting people, and moving on.

That’s right. Only biting. No eating. There is no blood in WWZ. These zombies want to bite you and move on, thus earning themselves a PG-13 rating. Zombies are fun for the whole family now! Even when soldiers toss grenades into a heap of squirming undead, they blow up with nary a drop of blood. When I see zombies, I want to see flesh eaten off of bones. I want to see fights over the most delicious intestines. I want to see brain-meat lust!

Zombies working out on the climbing wall

As if to drive home the lameness of the sprinting, swarming zombies, the final act of the movie takes place inside a wing of a W.H.O. facility filled with becalmed, slowly meandering zombies through which Brad Pitt has to slowly make his way, unseen and unheard, thus creating this thing called “tension,” a magical concept utilized in times past by flying wizards! I’ll tell you about them when you’re older. 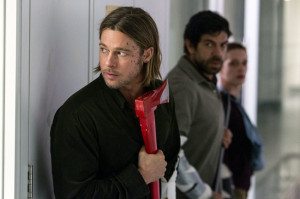 take that axe to the wall, you can escape this movie

The third act, by the way, was added after the movie was already shot. The original ending apparently featured a giant zombie battle sequence in Red Square that made Brad Pitt not appear as charming a family man as he did at the film’s start.

Because if you’re like me, you know that zombie movies are only interesting when nice family men do nice things to save the nice people. I mean just imagine a movie where a world-wide outbreak of zombie-itis threatens all of humanity, and the one man tasked with saving us is—I shudder to write it down—single. Who would care? Am I right? Give that man a couple of cute kids! Hell, give one of them asthma! A cane! A third arm growing out of her head! Anything! Human extinction is not enough—we need something to care about!

Back to the third act: not surprisingly, it belongs in another movie. All of WWZ feels like a Frankenstein flick, like they were re-writing it every day of the shoot, and once wrapped found themselves pasting the thing together out of parts never meant to be joined. 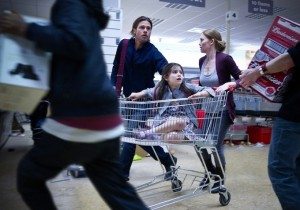 “There’s no food left, but I found this little girl. She looks meaty enough!”

The first act is reasonably exciting while retaining a certain feeling of bland predictability, as Pitt miraculously drives out of Pittsburgh with his family while every other human in the city is gridlocked zombie fodder. Next he calls in a rescue helicopter to whisk them away to an aircraft carrier. Nice to have friends in high places. Despite the rescue, Pitt refuses to help save the world because, you know, he quit that whole U.N. gig to spend time with his family. No one bothers to point out to him that the WHOLE WORLD IS DYING. Instead they blackmail him into helping by threatening to dump his family off the aircraft carrier. Everything plot-wise in the movie makes exactly this much sense.

The second act features Pitt flying to various cities just in time to watch the zombies take over. This is the comedy section. I couldn’t stop laughing, much to the consternation of my neighbor, whose geniune surprise when the zombie burst out of the airplane bathroom left me wondering whether humanity is worth saving after all. Hint to my neighbor: if you’re watching a zombie movie, and a dog is barking at a closed bathroom door, and the door is rattling, and moaning noises are coming from behind it—there is a zombie in that bathroom, and he’s going to jump out–wait for it–now. Hope that helps. 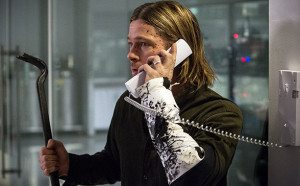 “What are you wearing?”

What else? Little. That they cobbled together an almost coherent movie is impressive enough, I suppose. Clearly they wanted to create a Bourne kind of vibe, but that’s not as easy as it looks. Tony Gilroy, writer of the Bourne movies, as well as Michael Clayton, The Devil’s Advocate and others, has a very specific style in which scenes exist as fragments, their beginnings and endings cut off, with information doled out in tiny pieces. The stories come together only when these fragments are added together. Individually, they seem to mean nothing. Puzzle building in this way is a very specific skill not possessed by many writers.

WWZ fails to imitate this style in any but the most glancing fashion, just enough to make you think, wow, they sure aren’t accomplishing what they think they are.

And so on and so forth. I wish I felt passionately about this movie one way or the other, but that’s another thing Hollywood big budget movie-making aims for these days: movies that inspire neither love nor hate, that go in one eye and out the other, bypassing the brain entirely.

Me, I prefer zombies who go for the brain: