Breaking Bad strikes a tricky balance between following through on the repercussions of every action, and continuing to drive the story forward, which is what these next three episodes are all about. 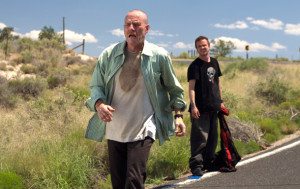 time to get naked, Walt

After the end of episode 2, where Walt and Jesse run off from Tuco’s corpse in the desert, I think most shows would start the next episode anywhere they wanted. That our heroes hitched a ride or walked or whatever wouldn’t require explaining. But in Breaking Bad such details are never left unconsidered. So we meet up with Walt and Jesse as they bury Tuco’s gun, and start walking. There’s a lot of desert to get through. When finally they hit a road and a truck stops to give them a lift, only Walt gets on it. In parting Jesse says to him, “This is a bold plan.”

The bold plan is what each of them have agreed to do to explain Walt’s absence and Jesse’s car. As always, the plan breaks bad for both of them, and yet another set of problems crop up to be dealt with. 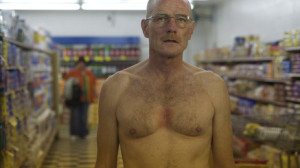 In Walt’s case, he wanders into a grocery store and strips naked. He winds up in the hospital claiming to have blacked out the last three days. Not the worst plan, but when the docs find nothing wrong with him, they don’t send him home. They’re going to keep him until they do figure out what happened. First up? A psych evaluation. Walt seethes.

Jesse, meanwhile, holes up with his favorite meth-smoking protstitute, Wendy, and has Badger call in a tip to the cops (this after the two of them have cleaned the meth lab out of Jesse’s basement, put it back in the RV, and stored it in the tow-yard of Badger’s cousin, Clovis, at an impressively inflated cost). The cops bust in and nab Jesse.

Grilled by Hank, Jesse admits to nothing. Hank tries to get Wendy to change her story, but she recalls the time he brought Walter Jr. to the meth-head motel (to scare him off of trying pot), where she imagined Hank wanted her to blow the kid, and refuses to talk.

Finally Hank brings in Tio, asks him straight-up if Jesse was with Tio and Tuco. Tio won’t ring his bell. As Hank’s partner Gomez explains later, Tio is old-school; no matter what went down, he won’t help the feds. 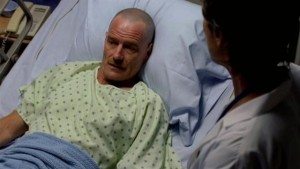 trapped by his own bullshit

Solve one problem, you’ve always got another. As for Walt, he asks the psychiatrist if doctor/patient confidentiality extends to Walt’s family. Assured it does, Walt “admits” to what really happened. That he didn’t black out, that he remembers everything, that he just had to get away from his family. His wife is pregnant with an unplanned baby, his son has cerebral palsy, Walt’s a professional failure, and he’ll be dead soon. As usual, when pressed, Walt knows exactly how best to bullshit his way to freedom. But is it bullshit?

In his hospital room, Walt stares at a watercolor on the wall: a man in a rowboat pushes away from shore, his family waving to him. How much of what Walt said was a lie? Walt lies to everyone, and to himself most of all. His biggest lie is that what he’s doing he’s doing for his family. Walt is doing what he’s doing for himself, and no one else. He wishes he were on that boat, rowing away forever.

Espisode 4 begins with our next glimpse of the future plane crash. The pink bear is scooped from the pool by a figure clad in a white radiation suit, bagged in plastic and laid out next to a long line of other mundane bagged items, each bag reading “Evidence,” the last holding a pair of glasses that look like Walt’s. 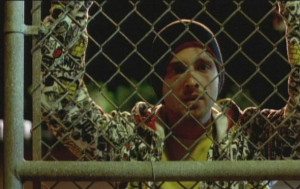 yearning for his RV

The focus of episode 4 is family. Jesse’s mom found his meth lab before he cleaned it up. In a lawyer’s office, he’s reminded that he doesn’t own his aunt’s house; his parents do. And they want it back, effective immediately. They kick Jesses out and take all the furniture. He’s left with a box of stuff and a scooter, which are soon stolen, this after he’s failed to find anyone who’ll let him spend the night. Finally he goes to the tow-yard to sleep in the RV. He hops the fence to the top of a port-o-john–and crashes through it into the sanitary blue goop. He stumbles into the RV, covered in blue goo.

Walt goes the “I’ll pretend everything is fine and nothing happened!” route. He cooks a marvelous breakfast for Sklyer and Walter Jr. (who by the way now prefers to be called Flynn). Sklyer isn’t buying it. The night before she asked him about a second cell phone. Walt claims to have no idea what she’s talking about. After breakfast, Walt goes into an unprompted bullshit explanation of the cell phone mystery, and for almost the whole speech we stay on Skyler’s face. Man is this a tense moment, as rough as anything with Tuco. You just want to scream at Walt “Shut the fuck up, you idiot!” It’s like he can read anyone, know exactly what to say to them, with the exception of Skyler. She walks out of the house before Walt even realizes she’s gone.

Sklyer is pure evil at this point, doing to Walt what he’s been doing to her, leaving without explanation, and upon returning saying she was “out.” Walt asks what’s wrong, she says everything is fine. It’s brutal. I almost hate her for it, but then I remember what Walt’s been doing.

Trying still to be the family man, Walt gives Flynn driving lessons in vast, empty parking lot (which we’ll be seeing again down the road). It doesn’t go well.

Clovis rather easily tracks Jesse to the inside of the RV by Jesse’s trail of bright blue footsteps. Clovis is pissed off. He wants his money. Jesse has nothing. So Clovis says he’s going to sell off the meth lab. While on the phone, Jesse sneaks back in the RV, and drives out through the fence.

Once the meth business picks up a little, Jesse actually returns to Clovis with all the money he owes him, and strikes a deal for further storage of the RV. 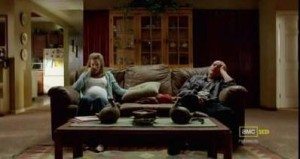 Walt confronts Skyler in as open and emotional a way as he can. He seems sincere, apart from the fact that he’s still hiding everything he’s done. Skyler calls him on it. Demands to know, right here and now, what is really going on. It almost looks like Walt is going to tell her. Instead he feigns ignorance. Outraged, Skyler stalks out. Walt follows her as she drives away only to see the RV parked outside.

Inisde the RV, Walt lays into Jesse more ferociously than ever before. All of Walt’s rage and frustration he dumps on Jesse. It’s too much. Jesse attacks him, throttles him.

Exhausted, they go inside Walt’s house so Jesse can wash off and Walt can give him half of the remaining money, money Walt had previously refused to hand over. They stand in the kitchen, arms crossed, silent, pouting. Finally Walt says, “Want some breakfast?” It’s the most touching family moment of the episode.

Threading its way through episodes 4 and 5 is Hank’s story, which amounts to the continuing fallout from Walt’s actions. The real conflict of Breaking Bad, the one running through the whole show, the one that is about to come to a head in the second half of season 5, is the one between Walt and Hank. 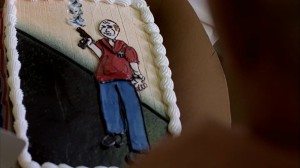 The only reason Hank was anywhere near Tuco was Walt. Hank is celebrated by his co-workers, even given Tuco’s grill encased in a lucite box as a souvenir. He’s promoted to work as liaison in El Paso. But Hank is freaking out. He has a panic attack in the elevator. He skips out a day from work. He drinks. Killing Tuco is weighing heavily on him. At the end of episode 5, Hank throws Tuco’s grill into the river.

Meanwhile, Walt’s chemo continues, and he’s desperate for money. He and Jesse drive to the desert, ready to cook. But how to sell their wares? Tuco is dead. Jesse says they need to be the distributors. He gathers his buddies, Combo, Skinny P, and Badger, to sell for him. Suddenly Jesse is a savvy businessman. In the kind of flashy montage the show is so good at, the three of them sell tons of blue meth, and the money rolls in. 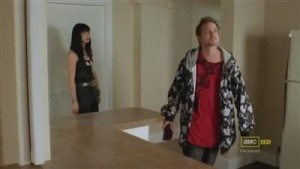 Jesse buys a shit car from Clovis and finds an apartment. It’s being rented by a young woman, Jane. When she finds out Jesse has no real job and wants to pay cash, she says no way. Jesse goes into his typical sob story, how his parents hate him, how they said he’d never amount to anything, how he’s really a good person and just needs someone to give him a chance.

This would never work on a normal person. It might seem unrealistic when Jane, though acting tough about it (“rent just went up a hundred dollars”), accedes instantly. But as we’ll later learn, this was the perfect tactic to use with her. For she too is a messed up kid who’s disappointed her father, who’s been told her whole life what a failure she is. They’re perfect for each other. Too bad Walt’s going to–well, we’ll get to that. Sigh. 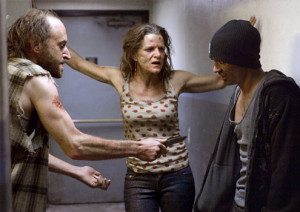 Walt is all coiled energry and frustration now. His psyche his pulling him in too many directions. At this point in the show, I don’t think he has any idea what he’s really doing, what he really wants, what he’s lying to himself about, etc. and so on. His focus is the money. He has to have more money. When Jesse brings him the first haul of $15,000, Walt asks where the other $1,000 is. Seems Skinny P was robbed by a couple of meth-heads. Jesse calls it “breakage.” Walt’s not happy. He asks if Tuco would allow any breakage. “What do you want me to do?” asks Jesse, meaning: there’s nothing we can do.

Yet Walt shows up at Jesse’s apartment that night with an answer. He puts the gun (the one Jesse bought a few episodes back) on the counter, says, “I want you to handle it.”

We know what’s going to happen eventually. Walt is going to turn Jesse into a murderer. This is his first attempt. It’s as though Walt is trying to make Jesse as outwardly corrupt as Walt is on the inside.

In season 2 and all subsequent seasons, Breaking Bad has a way of feeling vague mid-season, as though it’s not really going anywhere. By the end of the season, everything becomes clear. Every little strand is being carefully woven. The final picture won’t be revealed until the end. At the end of episode 5, many parts are in motion, but they’ve yet to coalesce. They will.