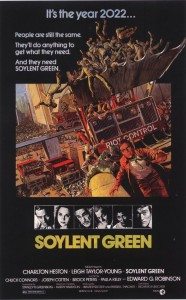 If you’re one of the few culturally closeted peopled left in the world who doesn’t know that Soylent Green might contain other ingredients aside from high-energy oceanic plankton, you might enjoy watching Soylent Green (’73). If you’ve got a secret love of Charlton Heston end-of-the-world movies, even better. You could put it on a triple bill with Planet of The Apes (’68) and The Omega Man (’71). On the other hand, if you know nothing about Soylent Green aside from what’s in Soylent Green, you wouldn’t miss much by missing it.

Like Planet of The Apes, Soylent Green builds to a big reveal at the end. Unlike Planet of The Apes, Soylent Green contains little of interest leading up to that reveal. The brilliance of Ape’s ending is that it colors and comments on everything that came before. It reframes the movie, not as a trick, as in the “it was all a dream!” cheat, but in a way that reinforces its theme. It’s already a great sci-fi adventure dealing with race and class. Then the ending takes the movie to another level. I’m keeping mum about it on the off chance you’ve both never seen the movie and don’t know how it ends, in which case what are you doing lounging around the internet? Go watch Planet of The Apes already! You’ve had 45 years! 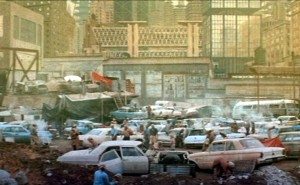 Soylent Green takes place in 2022, in a New York City populated by 40 million. Agriculture has broken down the world over (or so it seems). Food is scarce. The Soylent Corporation has cornered the world market on food supplies, and all they feed anyone is Soylent Red, Soylent Yellow, and Soylent Green, all of which come in the form of ‘90s era Macintosh computer floppy discs, or, occassionally, buns. Soylent Green is the newest exciting treat everyone craves, and shortages cause riots among the starving masses. Which masses conists of like a hundred people crammed into the 20th Century Fox New York backlot set. Not much of a budget for Soylent Green, I’m afraid. Which is a problem with a futuristic sci-fi movie meant to approximate reality. Technology seems to be locked in the ’60s. Imagination for Soylent Green‘s future doesn’t extend beyond the concept of food collapse, whores for the rich, and yellow filters for the outdoor scenes to approximate smog. 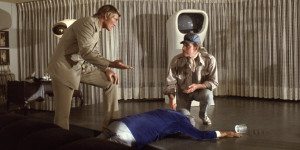 the bodyguard swears he didn’t do nuthin!

Charlton Heston plays detective Thorn, your basic tough guy movie cop. He investigates the death of a rich guy, Simonson (Joseph Cotten), who lives in a fancy apartment complex complete with “furniture,” i.e. a live-in prostitute supplied by the building. We in the audience see that the death is a murder plotted by a shadowy organization, so it’s kind of boring to watch Thorn come to the same conclusion.

Looks like NYC doesn’t go in for fancy futuristic murder investigations. Thorn’s the only cop there. He loots the rich apartment for food and alcohol and two giant, fancy volumes of The Soylent Oceanic Survey Report, 2015-2019, which he gives to his roommate, an old ex-professor named Saul (Edward G. Robinson, in his last movie), who likes books. Thorn also helps himself to the “furniture,” AKA Shirl (Leigh Taylor-Young), who complies happily. They take a hot shower together because wow! running water! and laugh nakedly. 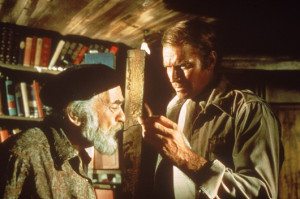 What else? There’s Simonson’s bodyguard, who obviously set up the old man for the hit, but Thorn doesn’t really get anywhere with him. Then there’s Simonon’s priest, who he confessed to recently. Thorn goes to the church, a disaster packed wall to wall with the disposessed, and talks to the zombified priest. He remembers Simonson, but when asked what Simonson confessed, he just kind of gets a farther away look to his faraway look, and wanders off. Hey, Thorn! You’re not gonna press the guy a little more? Nope. Movie would be over too early.

Thorn’s called off the investigation by the shadowy organization. He refuses to give up, he’s shot at, yadda yadda. 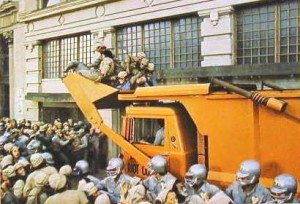 There’s no escape from it! Run!

There’s a goofy riot scene where the authorities send in scoopers, basically garbage trucks with big tractor scoops in front that scoop up rioters and drop them in the back. Out of which nobody climbs.

Meanwhile, Saul brings the Oceanographic Survey volumes to a weird little group of old folks in a run-down library called The Exchange. After looking them over, they reach an unavoidable, yet to us unstated, conclusion. Upon hearing it, Saul checks himself into Home, the government-assisted suicide spaceship in the middle of the city, where he’s led to a white room, laid out, given a tasty beverage, and shown Cinerama-sized video of mountain streams and sheep and wind blowing trees to the strains of light-classical music. Thorn makes it there just in time for Saul to reveal, too quiet for us to hear, the Big News. It’s all true, says Saul, but they need proof!

I would never spoil the fabulous ending for you. Suffice to say, Thorn jumps on a truck, winds up at the Soylent Green factory, and sees for himself what’s up. Before he can tell the world, he’s shot by the bodyguard in a showdown inside the church. Before dying, as the authorities take him away, he cries out the title of this post. 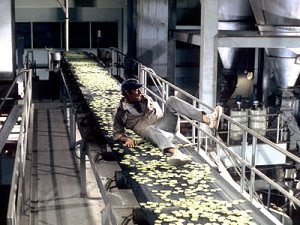 Does the world find out? Or is Thorn taken away to be killed? This being the ‘70s, the implication is clear: he’s dead and we’re screwed.

I like a nice “everything is mysteriously doomed!” ending, but The Parallax View this ain’t.

What is it? It’s kind of boring, kind of cheap, not exactly bad, but kind of a waste if you know the ending. In fact the problem is that it’s not bad enough. It would have to be far more exploitive and trashy to merit any real love. Zardoz this ain’t, either.

Video games in the year 2022 are fucking OFF THE HOOK!

One response on “Soylent Green Is Made Out of [SPOILER]! It’s [SPOILER]!”