When you really think about it, thoughts are problematic. I mean: what are they good for?

Can you eat them? Will they keep you from chaffing? How many do you need before you can trade them in for a handful of marbles?

If you think about it, you’re screwed. ‘Cause then you’re thinking thoughts and that cycle NEVER ENDS. You’re up all night thinking about whether thinking is thoughtful. I think.

Deep thoughts, right? Well, you just wait because I’m only getting started. Today’s Mind Control Double Feature is all about deep thoughts. We’re going to think ourselves so deep you’ll need a headlamp, unobtanium undergarments, and some worm repellent just to survive.

Think about that: if you dare! 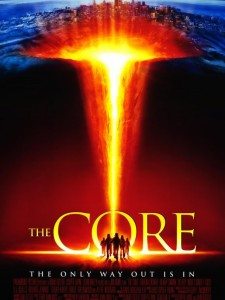 Do you know what movie I enjoy watching more than Jon Amiel’s The Core? None movie, that’s which. There is something so inexplicably dunderheaded about this motion picture that—from start to finish—I just want to run around the room screaming with my pants around my ankles.

Not that the way this film makes me feel is distinguishable from my mental state at most times: but still. Deep thoughts. Seriously deep. So deep that they’re hard to shake, particularly when you’ve got your trousers riding extra low. 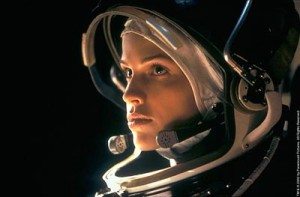 I’m made of stars. And other marshmallow shapes.

In The Core, Oscar winner Hilary Swank shows what she’s truly made of; that being meat, bone, denim, and one or two thoughts. She is Major Rebecca Childs and she is going to land the space shuttle on your roof. Why? Because your cell phone has caused the Earth’s molten core to stop spinning.

Wait. Pull up your pants and stop screaming. I’m JUST GETTING STARTED. 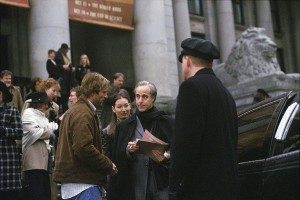 Aw, c’mon! I MAY NOT be the villain. Just give me a chance.

In The Core, Stanley Tucci, Aaron Eckhart, and Tchéky Karyo play movie scientists who determine that we’re all going to die unless we can somehow jump-start the center of the planet. They all have degrees from Michael Bay University, so they know of what they speak. Luckily, Delroy Lindo has invented a super secret mole ship made out of magic space beans that can not only tunnel to the center of the Earth, but can withstand, like, a lot of pressure you guys. Seriously. A lot of pressure. So back off. 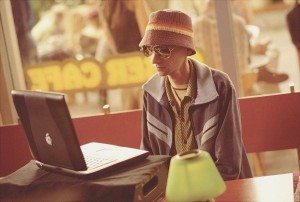 Also, DJ Qualls plays a linebacker for Ohio State who bangs a lot of cheerleaders and wins the big game. No. Just kidding. He’s a hacker dork who can pwn your 1337 and stole your bukkit. Together, these noble souls join to attempt a last-ditch effort to save life on our fair globe and make some truly—truly—great facial expressions.

The thing is, that every single thing that happens in The Core is completely scientifically accurate. Except for Hilary Swank being able to pilot the space shuttle. She’s only licensed as co-captain and junior codebreaker. Also, no. I’ve seen word jumbles that made more narrative sense than The Core. But you’re missing the point; this film is perfectly inane in every way. 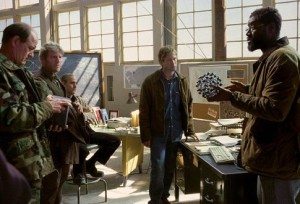 We call this special shape a ‘ball’ because: science. You—Richard Jenkins—pay attention.

There is a scene in which Tchécky Karyo gets slowly crushed that I want on endless repeat (someone make me a gif, please). There is a scene in which the geonauts wander about far beneath the Earth’s surface—where there must be 100s of atmospheres of pressure, like the equivalent of walking around carrying the Pacific Ocean stood up on one end if it was filled with really really heavy fish and stuff—but someone is killed by a falling rock. Damn you rock! My fist shakes at you!

Then, just when you’re getting ready to pull your pants up and drink a glass of water to ease your cracking throat, everyone’s saved by whale song. Yes. WHALE SONG. Eat your heart out Enya.

Is it hot in here or is it just you, baby?

If you thought Deep Blue Sea failed to adequately challenge your imagination, or that Devil’s Advocate hewed too closely to reality, The Core is the film for you.

There is none deeper. That’s what I think. 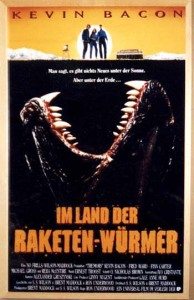 In German, Tremors translates to “In the Land of the Rocket-Worm” and hell yes.

In tiny Perfection, Nevada, Val (Kevin Bacon) and Earl (Fred Ward) long for something bigger, something more exciting. Perhaps a passel of massive, bitey, underground worm monsters would do the trick? Yes. They would do nicely, thank you.

Val and Earl and the handful of locals in Perfection—including Mr. Keaton (Michael Gross as Burt) and Reba McEntire (Reba McEntire as Heather)—must survive an assault from the not too deep. With the help of a plucky and cute scientist-in-training (Finn Carter) and an elephant gun, we get a lazy couple of days playing Dune meets Kingdom of the Spiders. Good times, right? 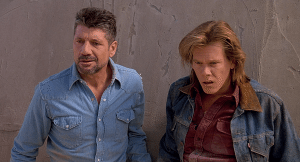 Well slap my buns and call me fruitcake.

Surprisingly: yes. Tremors is nothing if not good times. Sure, from a distance and from close up it seems like a B-grade monster movie with your standard ‘and then there were (#x-1)’ plot and off-the-rack characters. And that’s what it is. It just is that very well. 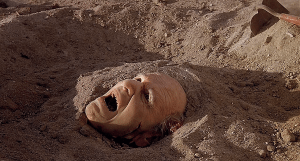 No, not that mother-scratcher. Bill Parker.

Let’s face it. We’ve all wanted to watch Kevin Bacon fight giant underground tongue creatures (dubbed ‘graboids’). Maybe we wanted him to win; maybe we hoped he’d lose—that’s not important right now. What’s important is getting to watch a bunch of none too smart fellers go mano-a-wormo with some inexpensive special effects. 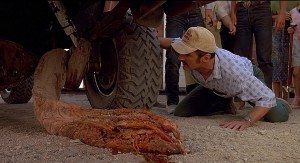 Tremors is one of those films that didn’t do so swell when it was released. Reportedly, while making it, Kevin Bacon felt he had hit a career low—but he hadn’t yet made The River Wild or Hollow Man, so chin up Chip. Things can always get worse. Tremors went on to gain a besmirched sort of luster on home video and late-night TV.

Now, everyone knows it: Tremors is the best low-budget giant worm attacks the Southwest film around. It is certainly better than Tremors 2: Aftershocks, Tremors 3: Back to Perfection, Tremors 4: The Legend Begins, or Hysteria. I’m just guessing, though, since I haven’t seen any of those films.

And now, I will leave you with one more deep thought: when was the last time you watched Sphere?