I wrote about two of the former recently, The Blackboard Jungle and Class of 1984, movies made by adults who, nostalgic for their own dreamily profound teenage years, saw around them a modern high school hellscape turning children into monsters. Look at the horrors today’s teens must face!, they seem to be shouting, save them before it’s too late! 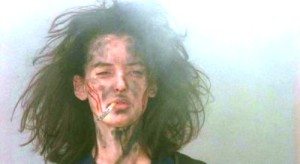 Sometimes you need to blow up the school.

In a similar vein are movies like Heathers and Mean Girls, made by film-makers only obliquely nostalgic for their high school days. For them, high school sucked, but hey, now they’re making movies, things worked out pretty good, and with a sense of humor they can look back and show the horrors of high school in an amusing light. Or a light in which you murder all those kids you hated most at the time. Movie revenge! The sweetest kind.

High school movies set in the past, however, are inevitably aglow with the warm light of nostalgia. They are a response to the terrible life today’s teens must lead, whenever “today” is. Everything always sucks in the present. Everything was always grand in the past. Remember when you were young? How fresh and innocent the world was? How it was filled with wonder and hope? Now look at! It’s all turned to shit and Clorox bottles, and Lake Erie is filled with giant, man-eating lampreys. For example. 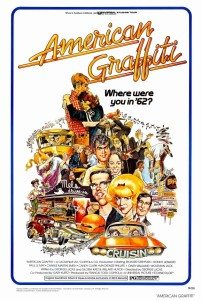 Long before George Lucas turned into a 900 pound lizard-monster biting off the heads of anyone dumb enough to have enjoyed his movies, and doing worse still to those who didn’t, he made American Graffiti, a movie meant to evoke his teen years growing up in Modesto, California, where he spent his nights cruising in cool cars up and down the main drag, and racing them on the backroads.

The story goes that after making his weird, depressing, sci-fi debut, THX 1138, Coppola dared Lucas to make a commercial movie. It took a number of screenwriters and a number of years, but American Graffiti was the result.

At first no studio wanted it. Universal eventually agreed to fund it, but didn’t like the end result. They were going to put it out as a TV movie. Wiser heads prevailed when word of mouth began to spread. They upped the ad budget, released it, and struck gold. American Graffiti remains one of the most profitable films ever made (when comparing budget to profits). 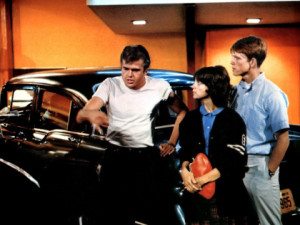 It’s got the now-prototypical story device of following a bunch of teens around over a single night, the night before graduation. There they sit, perched on the knife edge separating past from future, childhood from adulthood. What will they do on their last night as carefree kids? They will have good times, hard times, make decisions, some foolish, others wise, and come out better people, changed people, in the morning. Awww…

This was no boat accident.

The music followed the model set by Easy Rider: no score, just rock ‘n roll songs, different ones for almost every scene. 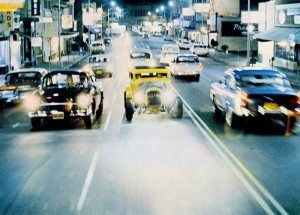 Living the good life back in the day…

American Graffiti is sweet and funny little movie. Made in the early ‘70s, an era of dashed ‘60s dreams, exceptionally corrupt politicians, endless war, and dark, soul-searching movies reflecting it all, American Graffiti was a rare beam of light. It’s frankly amazing that George Lucas made it. I guess the money and cynicism hadn’t yet eaten away his soul.

Tell Jabba I’ve got his money.

Only hold on a second. If everyone, once grown up, is nostalgic for their childhood, then mustn’t the ‘70s have been just as glowing, innocent and romantic as ’62? I’m glad you asked that. Next up: 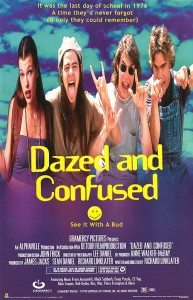 Twenty years after American Graffiti opened, Richard Linklater made his own one-night-in-the-life-of-high-school-kids movie, and when did he set it? In the magical days of his youth: 1976.

For Linklater, high school wasn’t about drag racing. It was about finding a party to hang out at and scoring Aerosmith tickets. Which is essentially the only story the movie has to offer. It’s enough.

The kids are played by a whole damn bunch of actors, many of them new to film, including Ben Affleck in one of his more believeable roles (an ass), Matthew McConaughey in one of his most memorable roles (with the best line of the movie; you’ll know it when you hear it), and Parkey Posey being all kinds of hilarious. Also showing up are Renée Zellweger, Nicky Katt, Milla Jovovich, Wiley Wiggins, and many more. 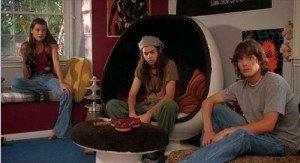 More importantly, everyone needs a party to go to. There is much beer drinking and dope smoking, plenty of the era’s rock songs on the soundtrack (though despite being called Dazed And Confused, Led Zeppelin refused the use of any of their songs), and all of the major characters get to experience one little character defining change over the course of the night. 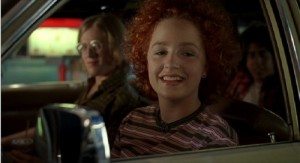 I suppose you could call Dazed And Confused the stoner response to American Graffiti, because of both the behavior of the former’s characters and the style of its film-making. Linklater is a chill kind of director. His characters aren’t in any hurry to do anything, yet the story never drags. It’s funny in the way all the boring, stupid crap you did in high school is funny, and as meaningful too. Which when you’re in high school, it is all meaningful. To you, it’s all there is.

When this movie came out I saw it often. It told the tale of high school more truthfully than I, at age 22, had ever seen. Heathers was surely more outrageous, The Breakfast Club more archetypical, Ferris Bueller’s Day Off more what you wished it had been, but Dazed And Confused—that was the movie that told it like it was.