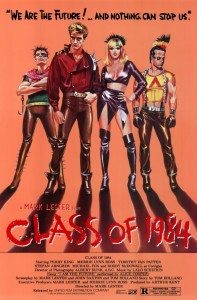 You think teenagers are trouble today, you should have seen them back in 1982, when a deadly combination of Martian fashion, post-punk music, and the lingering ill effects of disco’s fiery demise had turned the youth of America into roving packs of drug snarfing prostitutes and nerd-murderers hellbent on destroying all their benevolent elders had ever built for them, which was nothing, I tells ya, nothing!

I’ve been on an “evils of today’s youth” kick of late, beginning with the classic 1955 omen of teenage doom, Blackboard Jungle, about which I wrote at profound length last week (as I’m sure you noted, bookmarked, and recommended to all of your friends). Please pause in your ever-growing enjoyment of this piece to read it again for the first time. I’ll wait.

Welcome back. The 1982 Mark L. Lester “teenagers gone bad. No, seriously, really bad” classic of a new era, Class of 1984, is without a doubt a modern remake of Blackboard Jungle. Nowhere in its credits is the connection stated, nor is it mentioned by the wizards of universal knowledge over at Wikipedia, but it’s the same story, same characters, the same structure for much of the movie, and, in the end, the same message: a good teacher who truly cares can, if he works hard enough, get through to even the baddest of bad— 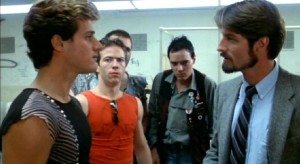 Stegman faces off with Mr. Norris

Ha ha ha! I’m killing myself. Have you seen Class of 1984? You should. It provides far more entertainment for your movie renting dollar than its predecessor, in part because it offers no messages about teacherly goodness and fortitude saving today’s (yesterday’s?) troubled youth. If it has any message at all, and I suspect it doesn’t, not on purpose, anyway, it’s that when kids go bad, your best option is to murder them. It’s your most entertaining option, anyway. I mean assuming you are amused by killing. And you are, because you’re also a huge fan of Lester’s later entry in the ‘80s canon, Commando, aren’t you? Yes. Yes, you are, you sick fuck.

First thing I learned in Essay Writing 101: insult your readers with profanities. Always gets their attention. Your attention. You goat raping marmalade farmers. 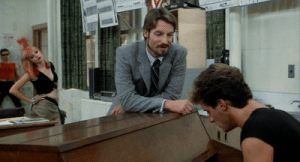 the worst kids are always the best piano players

Class of 1984 is ideal double bill material with Blackboard Jungle, if you like a certain kind of cinematic punishment. It begins the same way: a new music teacher, Mr. Norris (Perry King, whom you surely recall from Mandingo (’75)), comes to teach at a new, tough high school, full of unreasonably high hopes and outdated notions about kids (Perry is full of such notions, not the high school). Which kids are, we learn right away, monsters.

The longtime teacher used to the madness and resigned to hopelessness is Mr. Corrigan (Roddy McDowell, whom you actually do recall from Planet of The Apes and a million others), who teaches biology with a gun in his briefcase and has a fondness for rabbits. 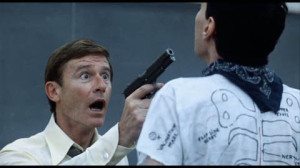 Mr. Corrigan gets a bit upset during class

Remember the jazz records from Blackboard Jungle? The kids in Class of 1984 pull the same stunt with Mr. Corrigan’s cherished rabbits. But we’re not there yet. We’re at the school entrance, where kids have to go through a metal detector to get inside. Who could imagine such a crazy thing? The punk kids get knives past the security guard with ease. Mr. Norris is aghast, but the rent-a-cop just shrugs; you can’t stop all the knives from getting in.

Mr. Norris’s music class is blessed with good kids who just want to play, and cursed with the evil gang we’ll shortly come to love, led by high-strung piano virtuoso Peter Stegman (Timothy Van Patten, who’d later go on to direct episodes of The Sopranos and much else), who has an exceptionally poor attitude toward authority. Of the gang, only Stegman is registered for the class. The rest of them just kinda like it in there. Norris, full of righteous rage, kicks them out. Chalk one up for the new teacher! 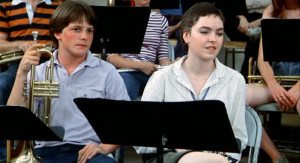 Aw, heck! Just look at him and tell me you don’t want to take him home with you.

One of the kindly music students is little Arthur, played by an obnoxiously young and kind of adorably plump Michael J. Fox. Arthur is pals with another nerd who, one day in the boys restroom, buys and immediately snorts drugs from Stegman and the gang. What kind of drugs, you ask? BAD ONES. Just then, Mr. Norris barges in and demands the bad kids turn over the drugs. What drugs, teach? The snorting nerd’s eyes have by this time gone super-loopy. Norris tells everyone to get out—everyone but Stegman. 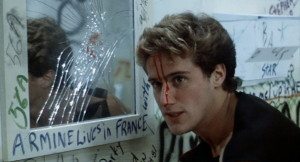 Remember that scene in Fight Club where a seriously deranged Ed Norton beats himself senseless in his boss’s office, then calls in the security guard, with all appearances suggesting his boss just beat the shit out of him? They borrowed that bit from Class of 1984. Stegman bashes himself all over the bathroom. The security guard bursts in. It looks bad for Mr. Norris.

The principal is no help. There’s no proof of drug dealing. And it appears that Norris just beat the shit out of a high school kid. 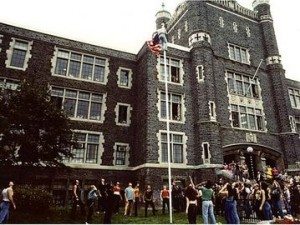 Oh yeah, and as for the nerd on drugs? He climbs the school flagpole all the way to the top, then falls to his death, wrapped in the American flag. Now that’s movie-making!

Class of 1984 has no fear of tossing aside every “teacher saves the day” movie cliché in the book. Norris goes to Stegman’s apartment, where he lives with his mother, for the sort of scene we expect of a teacher appealing to a troubled mother. Only here, mom screams at Norris to leave her poor lovable genius son alone and that she’ll see him in court for beating him up. The movie keeps presenting these moments where the teacher is finally supposed to break through to the worst of the worst kids, then tosses them out on their asses (the moments, not the kids). Poiter is the tough kid who plays piano in Blackboard Jungle, so by movie logic he’s the one who decides the new teacher is okay and mends his evil ways. As for Stegman? He plays bad-ass piano in one scene and that’s it. He’s back to running drugs and taking over the world. 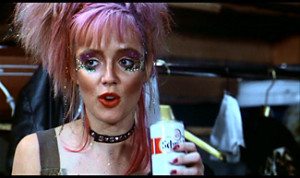 In Blackboard Jungle the gang is certainly brutal. They commit petty robberies, I guess? Beat people up now and again? In Class of 1984, the gang sells drugs, battles other gangs, and runs a teenage prostitution ring. It includes a scene of a new girl trying out for the position of teen whore. She’s told to strip down by the lone female gang member, Patsy, who I suppose is meant to be a lesbian? Maybe she’s just confused. Or misled. Or been sniffing too much Elmer’s Glue. Stegman tells one of his gang to test out the naked recruit, and Patsy shouts out eagerly, “I get to watch!” 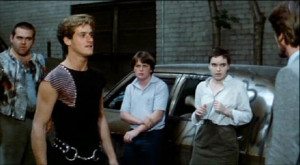 Mr. Norris has a wife, by the way, a pregnant wife, just like in Blackboard Jungle. She wants Norris to quit. Why? The kids come by and blow up Norris’s car. They jump Norris and bio teacher Mr. Corrigan after the pair try to save nerd Arthur and his girlfriend. To punish Corrigan, as I mentioned above, they slaughter all of his rabbits and hang their little rabbit bodies all over his classroom. They are, in a word, evil. But Norris won’t quit. There’s good kids too, good musical kids, who’ve been practicing all year (month? week? beats me) for their big recital. Norris isn’t going to let them down.

And so of course the big finale takes place at the music recital. Mr. Norris has weathered all the insanity as best he can, and still managed to train up the band to prime working order. The auditorium is filled with teachers and parents. 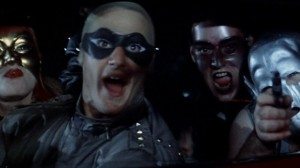 the gang out for laughs

At the same time, Stegman and gang break into Norris’s house and, taking the movie to an entirely new level of dark exploitation, gang-rape his pregnant wife. Patsy takes Polaroids of it, then runs off to the auditorium, and has a student deliver the photos to Norris, at the podium, baton raised, about to start the show. It’s actually a hell of a moment, Norris standing there, the band poised, the audience waiting, looking at this photo. What’s he going to do?

Long story short, Norris goes on a rampage. It’s not going to ruin your movie-renting experience to learn that he kills the lot of them, in ever more delighfully over-the-top ways. Stegman’s demise is, shall we say, highly memorable, both to us and to the concert audience.

What’s the moral of the story? I have no idea. Maybe: “Shit is insane out there! Kill or be killed!” 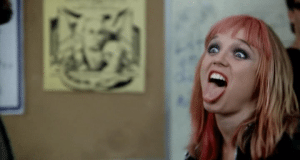 kids do the darnedest things

Class of 1984 was a big hit, at least relative to its budget. It showcased the early ‘80s punk aesthetic and was about as bleak and nihilistic as possible. Perfect for the kids. It was sort of parodied/built on a few years later by Troma studios, with their own high school classic, Class of Nuke ‘Em High (’86), which I haven’t seen since the ‘80s. Probably another unheralded masterpiece. I’ll need to check it out, as well as Lester’s own sequel, made in ’90, Class of 1999, which combines the high school movie with The Terminator to what I read are hilariously bad/brilliant results. [Update: All true!]

Kids, I tell ya. No matter what year it is, they’re always on the cusp of screwing up the world for the rest of us. We should get rid of ’em all. What could go wrong?