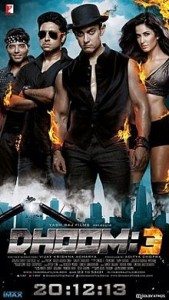 Chances are you don’t have any plans to see Dhoom 3—the highest grossing Indian film of all time—even though it’s probably playing in a theater near you right now.

Dhoom 3 is a Bollywood film, and for reasons that make me itchy when I consider them, Americans don’t see Bollywood films. We’ll go see movies in which French teenagers screw each other, Swedish existentialists play board games, and Japanese mobsters splatter grey matter, but we don’t pay any attention to the popular films of India. Even after Slumdog Millionaire grabbed its Oscars.

I, on the other hand, am just the kind of fellow who will kick back for three hours of action / romance / comedy / musical / fantasy entertainment. I dig Bollywood films. When MC Frontalot invited me to join him for a screening of Dhoom 3, I did not let the horribleness of my day deflect me.

Having not seen its precursors, Dhoom or Dhoom 2, I assume that in those films, like in Dhoom 3, Jai and Ali solve crimes and kick ass and also stick around for some dancing—all of which is manly and good. (In a Hugh Jackman way, not a Russell Crowe way) 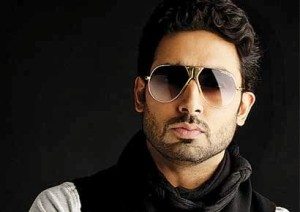 I am Jai Dixit and my sunglasses will kill you.

Here is where I would normally give you a sense of what happens in Dhoom 3, but to do so would be to miss the point entirely. Unlike the French sex romps and the Korean bloodbaths, popular Indian films are more often devoted to the gods of pure entertainment. Imagine, say, the Fast & Furious films if they were three hours long and featured extravagant musical numbers and a kooky uncle and maybe a little reincarnation. You know; like The Avengers.

I’m kidding. But not really.

While Western action films often take great liberties with physics and human endurance standards, they do so abashedly—hoping you’ll fail to notice or let them slide if you do. And even when a hero is emptying a preposterous number of bullets from his or her revolver, he won’t—just as an example—magically change clothes without explanation. 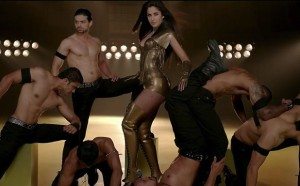 Contrastingly, in Dhoom 3, no one expects you to believe that Jai Dixit can drive a rickshaw through a brick wall or leap 50 feet into the air to kick a villain unconscious. Not the writer, not the director (in this case both the same guy: Vijay Krishna Acharya), not the producer, not even Abhishek Bachcha himself. They only expect you to be entertained, and not ironically either. In the same fashion, they then expect—reasonably—for you to be entertained watching a tap dance number straight out of Guys and Dolls followed by mustache-twirling villainy from a banker straight out of Dickens.

The artists behind Dhoom 3 don’t disregard continuity because they’re lazy. They do it because the alternative would be to value logic over spectacle. And spectacle, in popular Indian film, frequently wins. If you don’t believe me, go see Dhoom 3 and see if it feels like a three-hour film. This is the sort of movie where, if it will be more entertaining to have the climax be in Switzerland even though the characters just left Chicago on motorbike, we will not let anything as petty as geography stand in our way. 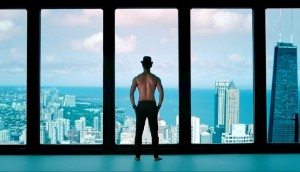 He always wears that hat.

While I have admiration for this style of filmmaking—one that serves alternate expectations than the American norm—I must admit that I didn’t think Dhoom 3 was very good. Of the Bollywood films I’ve seen it didn’t stand out in any positive way, save for how much money it made. It’s set almost entirely in Chicago, so the color and vibrancy of Indian locations are downgraded for drab grays of stone buildings, the ice blue of sky and lake, and the forced orange of nighttime lights. The (as expected) dreadful bit-part performances by Westerners suck up even more screen time in Dhoom 3 as a result of its setting, too. This leaves us with the aforementioned banker plus cheerleader / fashion model Tabrett Bethell in the role of top Chicago Police Officer. She wears her flannel tied up to expose her midriff.

Fair enough; we do the same thing with our versions of exotic foreigners in James Bond films. 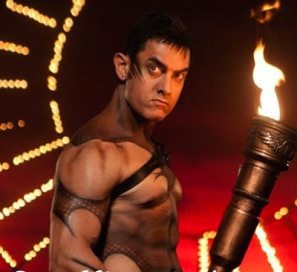 I am an angry clown!

Alas, no one’s joking ironically in Dhoom 3. It’s just not a film made with Western sensibilities about political correctness (or verisimilitude). Is this really how Indian audiences imagine mental disability? Did the actor and director honestly feel they’d hit their marks here? Or is this just another example of entertainment taking priority over all else?

I don’t know. I didn’t find the character in question entertaining; I found him painful to watch. This is a major role played as delicately as a 4th grader making fun of a paste-eater on the playground. Dhoom 3 stretches the chasm of cultural difference too far in this instance. 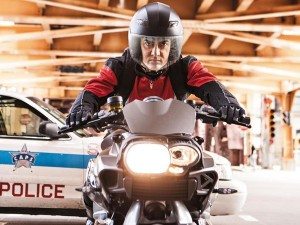 It’s 106 miles to Chicago, we got a full tank of gas, half a pack of cigarettes, it’s dark… and we’re wearing sunglasses.

Almost worse than the political incorrectness, Dhoom 3’s song and dance numbers felt forgettable. Katrina Kaif plays love interest Aaliya and she gets the slinkiest moves, but they don’t stick. And there aren’t enough of them. Dhoom 3 has an endless number of slow motion chase scenes involving Batman-esque CGI gadgets but not enough pizzazz.

Here’s what’s more interesting to me, though. Sitting down to watch Dhoom 3 in Emeryville, California, I was surprised that all of the trailers that played before the film were for Indian films. A whole slate of popular Indian films of which I knew not one good goddamned thing.

This shouldn’t have surprised me, but it did. I had assumed that people who went to see Dhoom 3 might also want to go see Expendables 3 or Lone Survivor or whatever else Hollywood is churning out and that that would be reflected in the advertising. In retrospect, I’m the idiot. I’ve never seen a trailer for a Bollywood film run before whatever Western film I’m seeing, even if I’m watching something foreign. Even if I’m watching something Asian (although admittedly not South Asian).

There’s a divide: Americans don’t know what popular Indian films are and so they don’t care about them. These films are so ‘different’ that FILM CRIT HULK just about shat his pants having gone to see Dhoom 3, being unfamiliar with what’s normal in Indian cinema these days.

This is all-inclusive, extra-earnest, more-so, yet oddly innocent entertainment. It’s serious spectacle. It’s like if you asked everyone in your extended family to describe their favorite film and then took a scene from each and stitched them together. Boom: Bollywood. 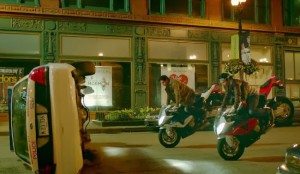 And yet, at times, excellent old school practical stunts.

While I hear various critics talk about how Indian cinema is ‘moving towards’ Western cinema, that sounds like only half of it. The truth is that Western cinema is moving towards Indian styles. More and more our entertainment is following the tried and true masala recipe, in which a little bit of everything gets mixed together. Increasingly spectacle becomes the point of the production.

Remember Pacific Rim? This was a film that blended action, comedy, and romance in an effects-heavy, mostly nonsensical story that swapped around established story beats from various other (foreign) sources to make a piece of entertaining malarkey.

If we had added another hour and a few musical numbers, it would have been Bollywood. And you know what? That would have made it BETTER. If we’re going to bend at the knee to the sovereignty of spectacle, let’s shuck the pretense of intelligence.

But can we please find someone better to cast than Vin Diesel?