We all know and love Dune (’84) as the disasterous David Lynch-directed, Dino DeLaurentiis-produced flick that drove Lynch forever away from big-budget studio pictures. To cleanse himself, Lynch followed it up with Blue Velvet.

Is Dune really all that bad? Mostly, yes, it really is. Certainly nowadays it’s fun to see what would be the cast of Twin Peaks in funny outfits riding giant worms through the desert, but that’s about it for good times.

Agent Cooper and Big Ed ride the back of the worm

Turns out Lynch wasn’t the first director to have a shot at Frank Herbert’s classic science fiction novel. In the ‘70s, visionary madman Alejandro Jodorowsky was set to direct it. Previously, Jodorowsky had made El Topo and Holy Mountain, which if you’ve seen either, you can begin to imagine the utter lunacy he would have brought to a science fiction epic. 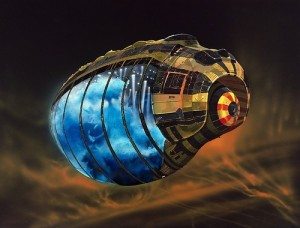 A bulbous spaceship–full of spice?

To better imagine that lunacy, there’s a new documentary about the failed production, Jodorowsky’s Dune, coming out soon, and it looks awesome. Jodorowsky managed to spend something like $2 million of his $9.5 million budget on pre-production, hiring Moebius, H.R. Giger, and Dan O’Bannon (based on his no-budget special effects work on Dark Star) to create concept art, much of which survives. Jodorowsky hated the look of typical sci-fi movie worlds and spaceships. He wanted something entirely different. 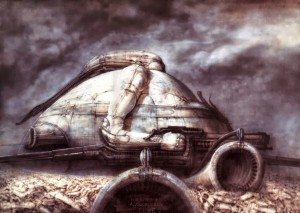 As I understand it, part of the film’s contention is to show how all of that concept art, created in the mid-‘70s, prior to Star Wars proving there was a vast market for science fiction adventures, was widely circulated in Hollywood and eventually used in all kinds of other movies, most obviously movies Giger worked on, like Alien, where he repurposed his Dune ideas, and Prometheus. (Apparently no mention is made of Jodorowsky suing Luc Besson—and losing—for stealing that concept art in the making of The Fifth Element). 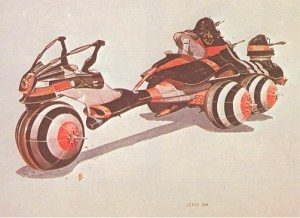 Jodorowsky signed Salvador Dalí to play the part of the insane Emperor, and wanted to cast Orson Welles, Mick Jagger, Gloria Swanson, David Carradine, Charlotte Rampling (he loved her in Zardoz), and Alain Delon, among others. He met with Pink Floyd while they were mixing Dark Side of The Moon, and later signed them to do the music. Is your head exploding yet?

Jodorowsky is alive and well and was interviewed extensively for the movie. He’s as nutty as his movies, with an ego as epic as Dune. He says he intended Dune to be “the most important picture in the history of humanity,” even though—or no, because—he’d never read the book, and rewrote the end. “I was raping Frank Herbert, but with love,” he says. Frank Herbert says the script was the size of a phonebook and would have made a 14 hour movie.

No doubt the most frustrating thing about this movie is going to be that Jodorowsky’s Dune was never made. Will someone take it upon themselves, now that this documentary exists, to realize it? Better yet, will someone actually let Jodorowsky make Dune? Wouldn’t that be something. It’ll never happen. But still. We can dream.

To sum up, read this. It’s part of a long description written by Jodorowsky of where he was going to take the story. Doesn’t matter if you’ve never read Dune. In fact this is even more entertaining if you have no idea what he’s talking about:

In my version of Dune, the Emperor of the galaxy is insane. He lives on an artificial gold planet, in a gold palace built according to not-laws of antilogical. He lives in symbiosis with a robot identical to him. The resemblance is so perfect that the citizens never know if they are opposite the man or the machine…

In my version, the spice is a blue drug with spongy consistency filled with a vegetable-animal life endowed with consciousness, the highest level of consciousness. It does not stop taking all kinds of forms, while stirring up unceasingly. The spice continuously produces the creation of the innumerable universes.

The Baron Harkonnen is an immense man of 300 kilogrammes. he is so fatty and heavy that, to move, he must make continuous use of antigravitational bubbles attached at his limbs… His delusion of grandeur does not have limits: he lives in a palace built like a portrait of itself… This immense sculpture is drawn up on a sordid and marshy planet… To enter the palace, one must wait until the colossus opens the mouth and draws a tongue from steel (landing strip…).

At the end of film, the wife of the Count Fenring leaps towards Paul, who has already become Fremen, and she slices his throat. Paul while dying says: “Too late, one cannot kill me… because…

Reality changes quickly. Three columns of light spout out of the planet. They mix. Plunge in the sand of planet: “I am the Earth which awaits the seed!” the spice is desiccated. The ground trembles. Water drops form a pillar surrounded by fire.

Silver filaments emerge from spice. Create a rainbow. They form in a water cloud, produce a red “lava”. Then vapor. Clouds. Rain. Rivers. Grass. Forests. Dune becomes green. A blue ring surrounds planet now. It is divided. It produces more and more rings. Dune is now a world illuminated, which crosses the galaxy, which leaves it, which gives it light – which is Consciousness – to all the universe. 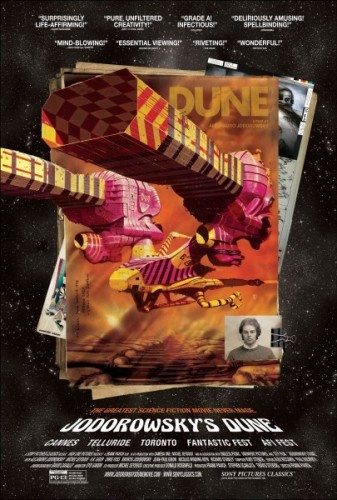 3 responses on “Time To Get Excited About Jodorowsky’s Dune”