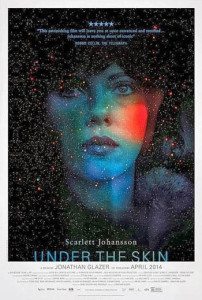 There’s little under the skin of Under The Skin. It’s a movie as visual and auditory experiment. I won’t soon forget the image of a nude Scarlett Johansson, motionless in an infinite black nowhere, a nude man ensorceled by her gaze walking steadily into the reflective black liquid at her feet, the soundtrack a rhythmic pulse of two beats against an eerie fractured drone.

Scarlett plays an unnamed alien. She seduces men, brings them back to the derelict house in which she and her motorcycle riding alien compatriot reside, and mulches them for food or, generally speaking, “sustenance.” The infinite black nowhere is this scenario as perceived by the alien. The alien, to say the least, is neither warm nor cuddly.

The whole movie—the whole experiment—is to tell a familiar story from the perspective of the alien, rendering it as unfamiliar as possible. In this it is effective. The music, by Mica Levi, is reminiscent of the eerier musical moments of 2001, with tones and soundscapes in place of anything like a traditional score. Like the visuals, the music is meant as a metaphor for the way the alien hears this new world on which she’s arrived. 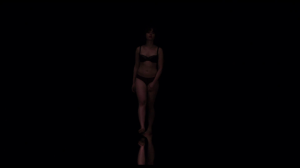 Only certain sequences are rendered as obliquely as the seductions, most notably the movie’s intro, which functions as the metaphor for the alien’s trip to Earth. It is abstract in the extreme, with shifting cirles and colors eventually resolving into an eye. Even saying it represents the alien’s trip to Earth is a stretch. It’s more abstract than that. Yet it conjures in my mind the idea of space travel. I don’t think that’s accidental. (That it conjures the feel of the end of 2001 is also not accidental).

The rest of the movie, while not abstract, is shot and edited and scored to represent the alien’s impressions of her new home, Scotland. It is dark and cold and lonely. Long stretches of the movie consist of nothing more than Scarlett driving her van around, watching men walking to and fro, ocassionally picking them up, or failing to. Men are her prey. She must study them. 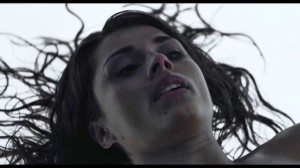 This one will do

Where Under The Skin is not effective is in making something more of its story than what’s on the surface. A movie about an alien taking human form who, after killing many, begins to feel empathy for her prey is easy to read as a statement about how we all feel alien in our skin. This is all Under The Skin seems to suggest. But even in this modest aim it has little to say. There is nothing to connect to emotionally in here. It is purely observational and intellectual. Seeing our world through the eyes of an alien doesn’t, as one would hope, shed any new light on how we live our lives or see ourselves. It’s visually neat, nothing more. 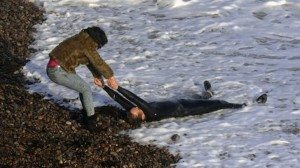 Not quite as kind a moment as this photo suggests

Director and co-writer Jonathan Glazer, who’s made two prior movies, is best known as the director of videos by bands like Radiohead and Massive Attack. It’s not surprising, then, that his mastery is in the visual and auditory realms of cinema, as opposed to the emotional or story-telling ones (at least as seen in Under The Skin; I’ve yet to see the more beloved Sexy Beast and the less beloved Birth).

Aliens taking human form on Earth is not new. One type of precursor is Nicolas Roeg’s film of Walter Tevis’s book, The Man Who Fell To Earth, with actual alien David Bowie playing the space-monster in a man-suit fated to live with humans. Much more than Under The Skin, The Man Who Fell To Earth suggests the lonelieness and alienation of human existence. Tevis was a man who felt acutely alienated from the rest of humanity, and so wrote from a place of deep feeling. 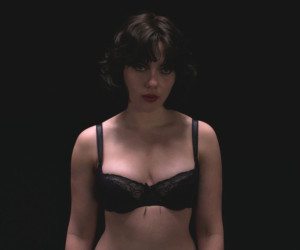 Where do I buy a ticket?

Under The Skin is likewise based on a novel, written by Michael Faber, one not at all abstract and impressionistic (or so (not having read it) its Wikipedia entry tells me). Glazer stripped out everything but the direct experiences of the alien protagonist. As strange as the result is, the story, once you catch on to the movie’s methods, is simple to the point of banality. Which brings up the issue of willful obscurantism.

Upstream Color is a movie likewise dealing with science fiction elements in an abstract and at first confusing manner. Like Under The Skin, by the end of the movie, the confusion at what, literally, has happened, has been cleared up. You know exactly what’s happened, and it’s not especially complicated. But in Upstream Color, that understanding opens the doors to meanings as numerous as the people who see the movie. What you read into what’s happened goes as deep as you’re able to take it. It’s a movie made with great specificity that nevertheless allows the viewer to define its meaning, literal and metaphorical, for themselves. 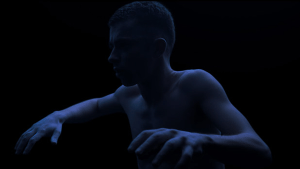 Floating in the goo, pre-mulching

Under The Skin offers no such depth. What’s literally happening in the movie is the end of it. The simple story is not obscured to open up avenues of reflection for the viewer, but to make an otherwise simple story brain-taxing, if not patience-trying.

For the most part I was engaged with the weirdness. There were a few walk-outs in my theater. My compatriot, the Evil Genius, says the movie bored him at times. I wasn’t bored, exactly. The visuals and the sound design kept me with it. Unfortunately, once it ended, I felt I was left with nothing to think about, other than clarifying what, literally, had transpired. Which isn’t hard to deduce given a little thought. 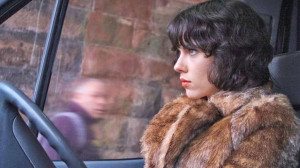 Watching the world walk by

As stylish and confident a movie as this is, it’s hard to imagine it having achieved as high a profile without Scarlett Johansson appearing naked in it as often as she does. Which brings up Under The Skin’s other precursors: Lifeforce and Species, two movies not received with quite the same level of respect. Both tell the tale of a beautiful, often naked space vampire arriving on Earth and luring men to their doom. What is it with beautiful, naked, alien seductresses destroying hapless men? I sense a lot of broken hearts among male writers of the world.

Lifeforce, known as Space Vampires before the studio chickened out, is a good bad movie. Or a bad good movie. It’s worth seeing, anyway. It has a sense of rhythm to it that’s very unusual, with oddly long scenes between the more typical sci-fi moments. If I was going to create a double bill beginning with Under The Skin, Lifeforce would be the natural follow-up. Species, on the other hand, one could live a happy life avoiding (unless it was late at night and you needed a midnight movie to round out a triple bill). 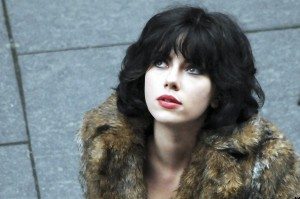 The outlines of these stories are all the same, even if the details are different or, in the case of Under The Skin, the details are absent altogether. What happens in Under The Skin is what always happens. Scarlett’s alien begins to develop a sense of herself in her human-skin. In contrast to the earlier shots of men walking the streets, seen by the alien as prey, we now see shots of women. She’s seeing them not as prey, but as windows into herself. She frees a man she feels some form of connection to, runs from her alien companion, and shacks up with a nice human. She tries to eat normal food to ill effect. Examines herself at length in a mirror. Finds attempted sex alarming. Runs through the woods. Reaches her end.

Scarlett’s performance is effective in its emotionless affect, a natural fit for her. It works in the context of the movie. Too bad, then, that nothing about the movie is emotionally affecting. The other actors, and non-actors (some of the men were picked up by Scarlett not knowing they were being filmed), are all fine. That we can’t understand half of what some of them say, with their impenetrable Scottish accents, adds to the alienating atmosphere.

I mostly liked watching Under The Skin. Its weirdness hit me in the way I like to be hit. Which is why I ultimately felt frustrated by it. If a movie asks this much of me, I hope for a reward beyond trippy visuals and a neat soundtrack. I think of Upstream Color and how it was essentially ignored by the public at large, then see a movie with far less on its mind but with Scarlett Johansson naked take off, and am a tad saddened at the state of the movie-going world.

9 responses on “On Under The Skin, Scarlett Johansson, And Other Naked Space Vampires”