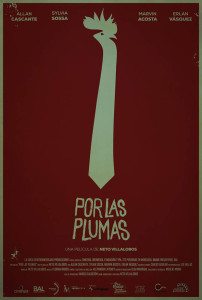 Roosters are ridiculous. With their bobbling heads, their self-important crowing, and their puffed-up plumage, it is quite difficult to look one in the eye and take its opinions seriously. In Neto Villalobos’ first feature, All About the Feathers (Por las Plumas), this holds utterly true. Rocky the cock is both the dream and the damage. He is what hobbles us and the aspiration to greatness that keeps us going — although, in this case, nowhere fast.

Villalobos’s film comes from Costa Rica (as does the Barcelona educated director). It centers on an affable but none-too-bright security guard named Chalo, performed warmly by Allan Cascante. More than anything, Chalo wants his own rooster. His dreams of riding this glorious cock to fame (not literally) sweep him and us into a gently paced comedy of errors. Naturally, Chalo’s getting what he wants turns out to be not what he wanted, but rather something unpredictable. Such is the way of dreams realized. 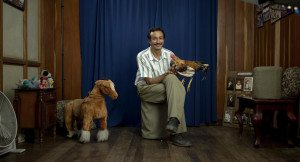 Your life is always likely to remain your life, only perhaps with more crowing.

All About the Feathers manages to make the most of an austere style. Unlike, say, Captain America: The Winter Soldier, this one doesn’t feature a ton of CGI and action scenes. In fact, Villalobos and cinematographer Nicolás Wong might have made their entire film without even a swivel-head tripod. Almost comprehensively, each shot in the film is static and generous and blissfully not handheld. Here is a frame into which our characters may eventually roam. Perhaps they will duck behind that pile of dirt to rummage for a box and then reappear. Maybe they will walk up this hill past us and leave us behind, still considering the scenery. If that sounds affected and dull, maybe you should go see a few more Marvel movies.

Amid the pastels of Costa Rica, Chalo interacts with a small cadre of quirky dreamers. In this, the film feels a bit like a less ridiculous Napoleon Dynamite. The life these people lead is one in which any thrill feels notable, no matter how small. It is one in which your tedious job is preposterous and still no joke. One where the rain falling is an event worth action and discussion. 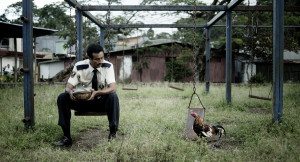 While it won’t put you on the edge of your seat, All About the Feathers is engaging in its minimalism. Because of the stillness, each moment of camera movement stands out. There is a sequence towards the end, in which — after having been locked off for so long — we finally run with Chalo. It is exhilarating in a way constant action can never be.

All About the Feathers is a perfect example of what you might expect if you grab a mess of tickets to the San Francisco International Film Festival. This is a small film, with little chance of playing in local cinemas ever again. That’s not due to any lack of merit, but rather because of the lack of a wide audience for quietly comic films about fighting cocks and the people who love them. So if you’ve been complaining about the monotonous output of Hollywood, it is time to shut your trap. All About the Feathers — and other independent, alternative features from around the world — are set to screen shortly in San Francisco, Berkeley, and elsewhere in the Bay Area.

All photos courtesy of the San Francisco Film Society.

4 responses on “SFIFF Preview: All About the Feathers”