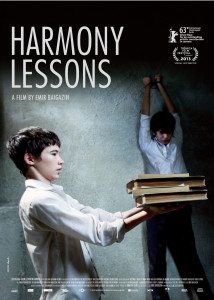 My mind wandering while watching Harmony Lessons, a typically slow, silence-filled, guaranteed never to see U.S. distribution, not-especially-narrative film from a far-off land international film festivals are lousy with, I began to question whether I even possess the cinematic framework needed to opine in anything like an intelligent way on it.

In his book Bluebeard, which focuses on a modern, non-representational painter, Kurt Vonnegut has one confused character ask another how one can possibly know whether or not a modern abstract painting is good or bad. His answer: first, look at a thousand paintings. After that, you’ll never be wrong.

Which the maybe all too obvious point here is that the quality of art is relative. If you’ve only ever seen two movies in your life, one is the best movie ever made and the other the worst. Add in more movies, and your rankings grow more nuanced. This becomes trickier still when you add in genre. If the thousand movies you’ve just watched are all stately dramas, what are you going to make of Re-Animator?

Some movies are exactly what they need to be without being, in one sense, “good.” Does Re-Animator feature characters as complex and relatable as those in The Last Picture Show? Does it feature cinematography as gorgeous? Subtle camera-work and editing? Realistic dialogue? Performances so powerful you’re crying by the end? It does not. Does that make it bad? Hell no! Turn it around and a viewer with different ideas on the nature of entertainment might ask, does The Last Picture Show have headless, re-animated corpses wreaking havoc? Non-stop action and gore? Absurd humor? Obscene sexual acts? It does not. Does that make it bad? Certainly not. (Well, truth be told, it might have benfitted from a zombie or two.) 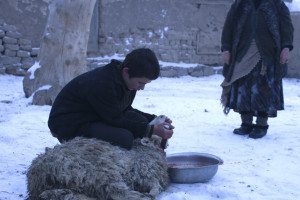 Harmony Lessons, the first feature by Kazakh writer/director Emir Baigazin, isn’t a horror/comedy, but it’s a genre picture all right, one I’ll call international film festival drama. I’ve seen a lot of movies at the San Francisco International Film Festival over the last fifteen years, and by far the most memorable ones have been the retrospectives (Robert Frank’s 1972 Rolling Stones doc, Cocksucker Blues, comes to mind) and features already picked up for distribution, ones I’ve forgotten I first saw at a festival.

Aside from that, what the festival is mostly full of are international film festival dramas. Two years ago I made a point of seeing many movies at the festival. I came away not particularly liking any of them. I couldn’t tell you any of their names, nor remember what any of them were about. They blend together in my memory as one long, slow-moving pan across a landscape, a few characters maybe working in a field or sitting, silent, across from another at a small table in a broken-down shack, ending as ambiguously as they began, their ultimate meaning inevitably summed up as, “This is what life is like here,” and/or, “Humans are so like this, even here, in this far-off land.”

Not that those are bad things for a movie to be about. Especially when the “here” is somewhere unfamiliar to western audiences (or any audience not from the region in question). Do movies like Harmony Lessons have a life in their countries of origin? Or do they exist only as grimy postcards sent to festivals around the world? Do Kazakhs line up to see their schools depicted as realistically (I guess? I’ve never been to a Kazakhstan high school. Maybe this is like Ferris Bueller’s Day Off to them?) as in Harmony Lessons? Or are they as likely to watch Harmony Lessons as the typical American movie-goer is to watch Gus Van Sant’s Elephant? I’m guessing both the Kazakhs and the Americans might prefer Captain America or The Fast And The Furious. 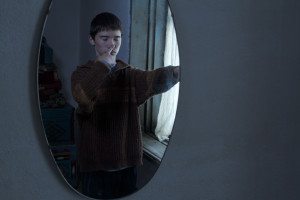 On the other hand, in its quiet, slow way, Harmony Lessons feels like it might be a bit sensationalist. It tells the story of science whiz Aslan, a quiet, emotionally disturbed kid nobody wants to associate after he drinks a glass of water they all put their penises in (long story). The school tough guy and racketeer, Borat, is the one who decrees that no one shall again speak to Aslan. I’m guessing Aslan is upset by this turn of events, because he spends his time torturing cockroaches and forlornly watching sheep walks across fields. He doesn’t say anything to anyone about the matter and wears one expression for the duration of the film, so that’s all we’ve got to go on.

I suppose there’s realism there. Quiet expressionlessness strikes me as a trait a soon-to-be-murderer might possess. Doesn’t necessarily make for compelling viewing, but there we are.

A new kid comes to the country school from the city. His name is Mirsain. He gets beat up by Borat. I’d say that Mirsain and Aslan become friends, as they have a couple of conversations in which Mirsain talks and Aslans sits there, staring into space, saying nothing, but are they really? I don’t know. Aslan gives Mirsain a mechanical pencil, which is nice.

Or is it? The murder weapon—Borat turns up dead, surprise surprise—is a mechanical pencil. The other murder weapon is a handmade gun Aslan built. Did I mention the electric chair he made for a cockroach? Science whiz, remember.

If all of this sounds like quite a bit of plot for an international film festival drama, it isn’t, trust me. It’s a two hour movie that feels like a two hour movie. But to be clear, it is in no way poorly made. It’s acted well by the kids, and shot well, with a number of lovely vistas on display. The best scene of the film is the last shot, which includes an element of the surreal, and reminded me, however vaguely, of the ending of Being There. 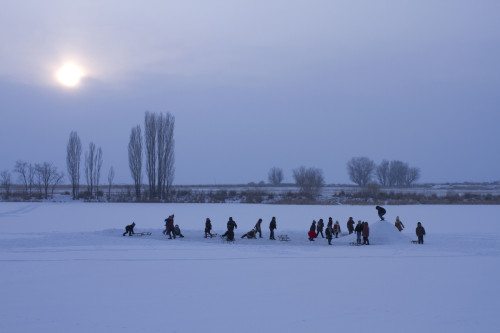 Innocent children playing on the ice. I thought maybe they’d be electrocuted or something. Nope.

The thing is, the thing my wandering mind found itself thinking on, is who am I to say whether or not this movie is “good,” or whether you might like it? At past iterations of the SFIFF I’ve been content to say that the selection of films wasn’t impressive, that I saw a lot of duds. I wonder, though. Is it that I’m not a fan of this genre? Maybe the programmers at this festival have been overjoyed these past years at their selection of magnificent international film festival dramas. Read the SFIFF write-up of Harmony Lessons. They appear to have found something more exciting and moving in the film than I did.

Or is it that film festival movies destined never to see wide release is the genre I’m less than moved by? I’ve enjoyed the hell out of a lot of foreign, slow-moving, plot-free, dialogue-mininal movies of the past, admittedly made by the standard list of movie-snob-approved directors from around the world. Possibly, then, I’m an old curmudgeon beating teenagers with my cane, insisting they get the hell off of my lawn? (I put signs up! Why can’t they play on the neighbors’ lawns, dadgummit?!) Possibly.

Do you like international film festival dramas? Do you live in or will you soon be visiting the San Francisco Bay Area? Then you might well enjoy Harmony Lessons, playing April 25, May 4 & 5 at the Kabuki in San Francisco. You may never have another chance to see it.

On the other hand, you may be better off watching a double feature of Re-Animator and The Last Picture Show.

I have no idea.