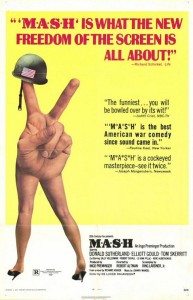 It had been ages since I last watched M*A*S*H, a mistake, because it’s funny and weird and insulting and even, a little, when you peek just around its edges, profound, and though it came across as even more haphazard in construction than I remembered, I think I liked it more than I ever have before, and before I liked it plenty.

MASH (’70) is Robert Altman’s first major movie as a director and though he professed to have hated working for 20th Century Fox, to their credit they didn’t fire him when stars Donald Sutherland and Elliot Gould complained of his working methods and asked that he be kicked off the picture (or so says Altman; Gould remembers it differently). As evidenced by the finished film, Altman’s working methods are clearly mad. It’s with MASH he pioneered the style he’s used ever since of layering multiple conversations over every scene, of allowing actors to improvise, of zooming and panning in ways that immediately cry out “Altman!” 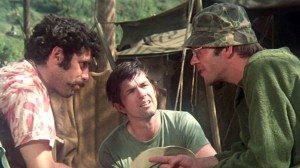 Story-wise, the only thing holding the movie together is the jeep that Hawkeye (Sutherland) steals in the beginning and returns at the end. To call everything in between “episodic” would be an exaggeration. Or an underestimation. Things happen, more or less, and they are awfully funny. Literally. They are funny because they are awful.

MASH is Altman’s stick, and he uses it to poke the eyes of anything anyone held sacred at the time, namely war, religion, marriage, and, generally speaking, authority figures of any kind. The ostensible heroes, Hawkeye, Trapper John (Gould), and Duke (Tom Skerritt), are irreverant, womanizing, drunken assholes, but damn are they ever good surgeons, and funny as hell, so can’t help but like them.

Fun times with the bone saw

The scenes in the operating room are bloody and gory in the extreme, maybe not quite as intense today as in ’70, but they still pack a punch, which is good, because they have to for the movie to work. For the characters to behave as they do outside of the operating room, we need to see how ghastly it is inside of it.

I remember I used to think the football scene at the end went on too long, or didn’t have much to do with the rest of the movie, but clearly I was high at the time, because it’s exactly what the movie is about. The football game is the war. It’s a bunch of overgrown boys banging into one another on a dirt field, injuring themselves, pissing each other off, cheating whenever possible, yelling and screaming, all over a stupid bet between a chest-thumping General and daft Lt. Colonel.

War is a madhouse, religion is a joke, and suicide is painless. Speaking of Painless, his attempted suicide, shot as The Last Supper, is a highlight. It’s all theater, says the movie (and so is the war). Painless and everyone who gathers to send him off are actors playing very silly parts. It ends with Painless, given what one presumes is a sleeping pill, in a softly lit red room, surrounded by diaphanous waving sheets. Hawkeye brings in a nurse, she thinking he’s trying to seduce her, but no, he presents her with Painless, asks her to do the guy a favor, despite her being married and going home in the morning. One look under the sheet at what we’ve been told is Painless’s enormous pecker, and—

–And the next morning as she flies away in the helicopter, she smiles wide as the sky.

All this man needs is one little favor…

Everyone’s a winner! So long as you blow off everything society tells you is important. At the end there’s a shot of Duke, who’s been seducing every nurse he can get his hands on, arriving home, coming off the plane, running to his wife and two kids. 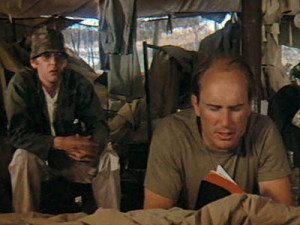 Then there’s Frank Burns (Robert Duvall), the religious nut whose tent Hawkeye and Trapper initially share. Then again is he really a nut? He’s religious, anyway, so by the movie’s definition, yes. Total disregard for religion wasn’t the norm in Hollywood movies at the time. It is in MASH. Burns is also a lousy surgeon, at least according to Hawkeye and Trapper. Not according to Hot Lips  (Sally Kellerman), who falls for Burns instantly. Religious they both may be, but when Burns, in her tent late at night, says “God meant us to find each other,” she pulls off her robe and cries, “His will be done!” So, yes, religious. Exactly.

Burns doesn’t last but half the movie before Hawkeye engineers his removal, complete with straitjacket. And by the end Hot Lips is shacking up with Duke. There are no sky pilots in MASH units.

I ought to see the man Mulcahey…about a jeep

Then again, there’s the chaplain, Father Mulcahey (René Auberjonois), aka Dago Red (the movie does not shy away from the racially questionable, what with the football player, Spearchucker Jones), but his best moment is the blessing he reads over a jeep, taken from an actual army chaplain’s book of prayers. Auberjonois found it and wanted to read it, so Altman shot it and put it in the movie. 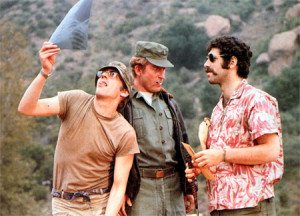 The screenwriter, Ring Lardner Jr., won MASH’s lone Oscar, ironic in that he hated the movie when he saw it, complaining that they didn’t use a single word of his dialogue. Altman made the movie he wanted to make, not anyone else’s. His way of working was to wrangle chaos, which required first that chaos be created.

As to the song sung during Painless’s da Vinci suicide scene (which song would also end up being used to open the movie), Altman told composer Johnny Mandel that it had to be simple, so it could be played on a guitar and sung by actors in the scene, that it had to be called “Suicide Is Painless,” and that “It’s got to be the stupidest song ever written.” Altman tried to write the lyrics himself, but he couldn’t get them dumb enough. Not to worry, said Altman, “I’ve got a fifteen year old kid who’s a total idiot,” which kid wrote the lyrics, it’s said, in five minutes, and has since earned something like $2 million in royalties from it. 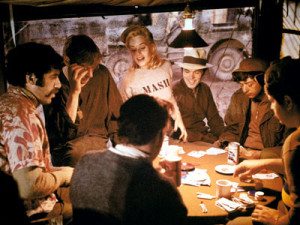 The studio made Altman put in the text at the beginning identifying the setting as the Korean War. Aside from Korea being mentioned briefly over the camp loudspeaker, Altman made a point of removing any reference to which war was being waged, intending it to be mistaken for Vietnam, a war yet (as of ’70) to be cinematically criticized. Aside from Kubrick’s Dr. Strangelove in ’64, no one had made a movie mocking war the way MASH did. But Strangelove was ahead of its time. MASH hit the counterculture anti-war zeitgeist at precisely the right moment and was a huge financial success, the biggest Altman would ever have. (Catch-22 came out the same year as MASH and did poorly, I think mainly because it took one of the funniest, most biting war satires of all time and turned into a laughless, unwatchable slog.)

Altman could have made anything he wanted after MASH‘s success. So he made Brewster McCloud, starring Bud Cort (who appears in MASH), a very weird movie you should watch immediately. This isn’t what studios wanted him to make. Says Altman:

I find it hard to repeat myself, or consciously repeat myself. I can’t tell you how many times I was offered to do another MASH. I would always ask why. There was one, and that’s what I did. I despise the television show, because I think it was thematically the opposite of what the film was. For 12 years, it was about an Asian war. The enemy, no matter how you want to cut it or what platitudes you say, was always the guy with brown skin and narrow eyes.

The enemy in MASH is war itself and everything and everyone who sings its praises. When faced with one, best to get in a little golfing and enjoy a martini. 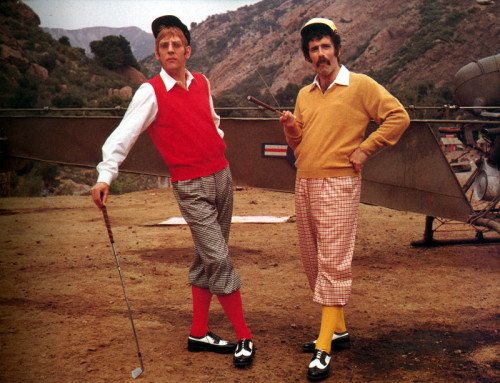 This is how you fight a war

I try to find a way to make
all our little joys relate
without that ever-present hate
but now I know that it’s too late, and…

The game of life is hard to play
I’m gonna lose it anyway
The losing card I’ll someday lay
so this is all I have to say, that

The only way to win is cheat
And lay it down before I’m beat
and to another give my seat
for that’s the only painless feat.

‘Cause suicide is painless
it brings on many changes
and I can take or leave it if I please.

The sword of time will pierce our skins
It doesn’t hurt when it begins
But as it works its way on in
The pain grows stronger, watch it grin, but…

A brave man once requested me
to answer questions that are key
is it to be or not to be
and I replied ‘oh why ask me?’

‘Cause suicide is painless
it brings on many changes
and I can take or leave it if I please.

Yes suicide is painless
it brings on many changes
and I can take or leave it if I please.

And you can do the same thing if you please.