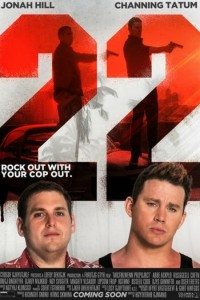 I’m not laughing at you. I’m laughing with you, because together we all realize that what we’re doing is preposterous. And what we’re doing is going to see 22 Jump Street on opening weekend. Except, at the end of the weekend, I’m out $11.00 and the film has made $60M, which hardly seems fair, if we’re going to laugh together.

22 Jump Street — sequel to 2012’s 21 Jump Street, which was itself a broadly-winking self-aware plundering of the ’80s television program — may have been really funny. I’m going to proceed on the assumption that it was; blaming my own lack of involvement with the film on my particular screening’s dreadful audio. Which sucked, thanks Shattuck Cinema in Berkeley.

It’s hard to engage in comedy when you’re struggling to catch the dialog.

Even so, I did laugh a bunch — with 22 Jump Street, not at it — as it translated the previous film’s jokes about how dumb it is to mine old television properties into humor based on how pathetic it is to trot those same tired properties out for a victory lap.

Exhibit A: City Slickers 2: The Legend of Curly’s Gold. 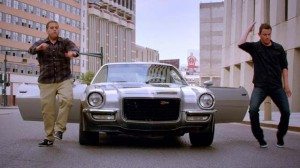 But 22 Jump Street was funny in almost but not quite the same way as 21 Jump Street. In the first film, two mismatched cops are assigned undercover duty pretending to be high school students so that they might bust a drug ring. The idiocy of the premise goes sublime when the unattractive, nerdy Schmidt (Jonah Hill) and the buff, dim-witted Jenko (Channing Tatum) immediately and accidentally switch undercover identities so that Schmidt is thrown into the popular crowd and Jenko gets stuck in AP Chemistry.

That’s really funny. It has nothing to do with the television program, or the strictures of logic, but the striking role reversals result in comedy gold. The surprise of Jonah Hill being the guy everyone loves is bizarre and funny and Channing Tatum is even funnier stuck as the big dork. The rest of the film — a bunch of silliness about drugs and cops and adapting television shows — trots along behind like an adorably puppy.

Then directors Christopher Lord and Phil Miller made The Lego Movie which drove cinema-starved audiences wild. And they came back to Jump Street for this sequel. 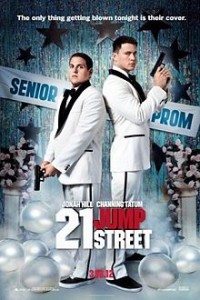 Which, as I said, I think I liked. What’s good about it is, much as 21 Jump Street poked fun at itself for being an adaption of a bad television show, this one openly mocks itself for being a sequel. Unfortunately, this is more or less exactly the same thing that The Muppets Most Wanted did — make jokes about how sequels are hard, and how there’s all this money to spend but tons more pressure to do something that is simultaneously different and yet exactly the same.

What’s not so good about 22 Jump Street is that the role reversal, which worked so well in 21 Jump Street, is re-reversed. That means that when Schmidt and Jenko get assigned to undercover roles ferreting out a drug ring in college, Schmidt is back to be being the loser and Jenko gets to be the popular jock. Laughing at Jonah Hill for being an unattractive nerd isn’t really that funny. Laughing at Channing Tatum for being a pretty-boy meathead is likewise significantly less rife with humor.

You might suggest that they couldn’t pull the exact same stunt again in the sequel, but since most of the rest of 22 Jump Street‘s plot does exactly the same thing as the first film — blatantly and intentionally — I remain unconvinced. Instead, the filmmakers try for some gender-based role reversal humor, in which Hill’s Schmidt plays a traditional female role and Schmidt and Jenko’s relationship mimics that of a college romance.

It’s good stuff, but not as.

Watching Schmidt do the walk of shame after his one-night stand is cute, but not ridiculous. Drawing attention to traditional female roles and how out-dated they are is clever, and worthwhile, but more depressing than hysterical. 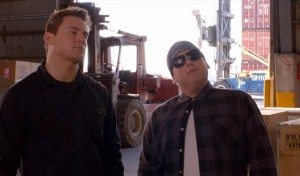 Channing Tatum again proves his natural charisma, his comic timing, and his increasing promise. Jonah Hill drags, denied the richness that his last outing as Schmidt allowed. Lord & Miller set them up and knock them down as well as any comic directors working today, but they do so with less commitment and investment than, say, Edgar Wright. A few sequences stand out for exceptional physical humor (breaking into the frat) and visual humor (taking a bullet for your partner). I believe there was even more cleverly funny dialog than I caught, but I missed most of it. Damn Shattuck Cinema.

I suppose I’ll have to watch 22 Jump Street again — at home this time, so I can hear what the characters are saying. Perhaps in the comfort of my own living room, without the pressure of opening weekend crowds, I’ll find it as amusing and endearing as 21 Jump Street. Or maybe not. Perhaps it’s just good for a comedy sequel, which is an awfully low bar to leap.