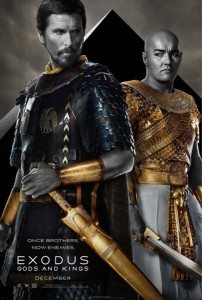 We’ve both got gold wangs.

Many would say that it’s impertinent to judge a film before you’ve seen it. They’re right. But that doesn’t mean I can’t take a hard look at the materials used to promote a picture — particularly when those materials are as hysterically lame as this stuff for Ridley Scott’s forthcoming Exodus: Gods and Kings.

Welcome to another edition of Prognosticontemplation!

From acclaimed director Ridley Scott (Gladiator, Prometheus) comes the epic adventure “Exodus: Gods and Kings,” the story of one man’s daring courage to take on the might of an empire. Using state-of-the-art visual effects and 3D immersion, Scott brings new life to the story of the defiant leader Moses (Christian Bale) as he rises up against the Egyptian Pharaoh Ramses (Joel Edgerton), setting 600,000 slaves on a monumental journey of escape from Egypt and its terrifying cycle of deadly plagues.

Honestly. That’s some disorienting stuff. One man’s daring courage? Terrifying cycle of deadly plagues? Screenwriter Steve Zaillian appears to be taking a few liberties with the almighty — although let’s not be too quick to judge. Maybe this trailer is just rubbish and the film will be aces? Maybe Exodus: Gods and Kings has spiritual depth?

You say that you didn’t cause all this…

intones the regal Joel Edgerton, playing Ramses, as high-contrast chariots thunder across the drained pan of the Red Sea.

You say that this is not your fault…

Pharaoh continues, as we cut to Isengard, where Saruman commands orcs to burn the trees and raise the Uruk Hai.

What? This isn’t one of the Lord of the Rings films? Are you sure? Let me watch that bit again.

Screeching birds of prey. Men with swords. Digitally enhanced everything. Oh. I see now. This is a sequel to 300. Or a remake of Gladiator.

Why are there orcs in it, then? Well, you look at this screenshot and you tell me what we’re looking at:

Hm. Lots of fires. Multi-level terrain. Scaffolding. ‘State-of-the-art visual effects and 3D immersion.’ I guess those are digital people? Maybe… Jews? Yes, you can make out their tiny little digital circumcisions. But why are there a bunch of Jews in a film about two brothers who are now enemies?

They’re slaves you say? Seems like a strange twist in a tale of filial competition. I wonder if it they’re an important plot point, these tiny Jews building the storage cities of Pithom and Ramses? When do they get to race around on horses with spears?

Maybe I should have read the book this film is based on. It looks like it could be a real corker.

So let’s just see who’s more effective at killing, you or me!

Silly king. Gold is too soft a metal to make good armor.

Finally! I’ve been watching this thing for thirty seconds and no one has lopped off anyone’s head or exposed their lady-bits or defecated in public. But after we get a little sneaky glimpse of Christian Bale as Moses, two bannered armies tear up the rocky desert so that Ramses and Moses can make with the choppity-chop. Yeah! Kill those… uh… Hittites? Jebusites? Persians under the command of god-king Xerxes?

What the hell is going on?

Don’t worry about it, because now Sydney Wayser is covering a Simple Minds song that’s been smothered by strings. I thought at first she was singing the traditional Irish song, “And She Moved Through the Fair,” but I was wrong — it’s the more modern track “Belfast Child,” so selected because so many Jews hail from North Ireland. Like Christian Bale, for example, who is the most Jewish Welshman who’s ever played Batman. That’s why his parents named him Christian, to throw off the Inquisitors of Spain.

As Wayser croons, the esteemed Mr. Scott gives us the briefest flash of slaves before jumping into what is clearly the heart of the story:

Moses, Ramses, when I look at you I still see the two boys who grew up together, close as brothers.

Yep. I see them, too, both looking regal, plus a baby — young Moses let’s assume. Moses and Ramses clink swords in their golden attire and grin like they’re about to accept a pair of Oscars. I’m thinking those smiles won’t last long.

I’m pretty sure that sand is real.

The teaser continues by showing off some impressive sets. Are they real or digital? With the way the film is shot, I’m guessing they’re as digitally enhanced as a seventy-four-fingered boy.

Let’s pause for a second. Halfway through, what have we learned?

Well. This is a film about Moses and Ramses. If there are other characters, fuck ’em. There are going to be lots of battle scenes and gold lamé outfits. So far no one has mentioned god or Jews, and why would you in a Torah story?

I suspect that the ninth plague will be xenomorphs.

Instead, let’s have us a chariot race! Who is that racing against Moses? Dunno, but BRING ON THE DRAMA!!!! Moses is gonna use his power-move any second now, I can feel it. Probably it’s fireball punch, but it might be boils, or vermin.

The not-quite brothers’ friendly sword fight gets all clangy and then: boom: it’s Sigourney Weaver looking arch and as North African as a WASP can. Is no one in this film Egyptian or Jewish? We’ve got the excellent Ben Mendelsohn a ways down the cast list playing an unnamed role; he’s half-Jewish. Uh. John Turturro has a Jew-fro; does that count?

Exodus has a higher percentage of Australians than it does Egyptians.

It’s also about to hump your screen with plague effects, so batten down your hatches.

Based on this trailer, the first plague is tornadoes. The second is digital hail. The third is running. Fourth is exploding seagulls — a great addition! good job Zaillian! — and the fifth is blood, which is like so 1280 BC.

I came here to tell you that something is coming that is out of my control.

… and can we just put the brakes on for another second? I know the score is ramping up in intensity and the edits are coming faster and faster — we’re at like 17 meaningful looks per second now — but this line of dialogue attempts to encapsulate the drama of Exodus: Gods and Kings and it does so in a way that’s seriously depressing.

Have these people even read Exodus?

It’s not Snow White, which you can retcon so Maleficent makes money; it’s a religious text. You know, like Noah. And yes, Moses and Ramses were raised as brothers, and that’s good dramatic meat, but this ‘something is coming’ crap is all wrong. The drama of Exodus is not that Moses can’t control the harm that threatens his kingly brother, but that he has personified the destruction of his own people. And that he must be convinced to try and save, in essence, himself.

The something that is coming isn’t The Blob. It’s the vengeance of god. To say that god is our of your control is to make this story into a soap opera. Stay tuned next week and see if Pharaoh’s heart remains hardened, and if Lucy Mae confesses to sleeping with Tad.

Can we not turn this story into an excuse to sell Burger King toys?

We end with a grand chase scene across mountain cliffs and a single white horse being dwarfed by a tsunami.

I can’t wait to buy my commemorative Exodus: Gods and Kings cup. I hope it’s got a picture of god on it.