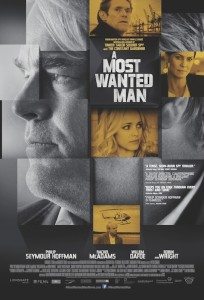 Among the many reasons making A Most Wanted Man a mournful viewing experience is its star, Philip Seymour Hoffman, giving a performance as shuffling, shabby, half-destroyed, emotionally ragged, and shattering as you’ve ever seen. Which in the case of Philip Seymour Hoffman is saying one hell of a lot. Yes, he was a troubled man, yes, he brought his end upon himself, but the man was a brilliant artist and his death is a tragedy. What can I say? Movies mean a lot to me. When sublime film artists go too soon I find myself shaking my fists at the clouds and cursing fate. I know, every day tragedies far grander than an actor OD’ing befall humanity, but tonight, for the two hours I spent watching A Most Wanted Man, the loss of Philip Seymour Hoffman was the worst of them.

Another reason one feels mournful watching A Most Wanted Man is that it’s a fucking mournful movie. It’s set in Hamburg and Berlin, with Hoffman playing Günther Bachmann, head of a small, little-known anti-terrorism task force that works around the edges of German law. He’s continuously at odds with the head of Hamburg intelligence, Dieter Mohr (Rainer Bock), who has little interest in Bachmann’s slow methods of creating informants and infiltrating terrorist networks. He’d rather make showy arrests and be done with it.

Bachmann helps his informant see the wisdom in continuing to inform

Worse still is the CIA agent come to trouble Bachmann, Martha Sullivan (Robin Wright). As far as Bachmann is concerned, the U.S. spy community does nothing but abduct suspects and bury them in Guantanamo. He blames his troubled past—an incident in Beirut—on American bungling.

All three of these characters, however sure of themselves and their own methods, seem tired and beaten, like they’d rather be doing anything else with their lives, but can’t, because someone’s got to do it; the terrorists aren’t going away. They’re just harder and harder to find and to deal with in any way that means anything. 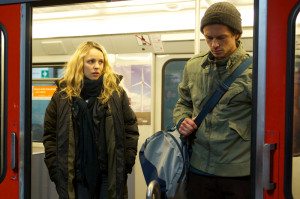 The suspected terrorist and his lawyer

Bachmann is after a respected Muslim businessman, Dr. Faisal Abdullah, who’s clearly diverting money to terrorists organizations, but in a way too sly to pinpoint. Sullivan and the CIA are on to Abdullah too, but likewise lack hard evidence. She wants to arrest him, but what then, asks Bachmann? There goes their link to terrorist financing. Stick him in a black hole and someone else takes his place, someone they don’t know. Bachmann wants to turn Abdullah to their side, to catch him out, then offer him a deal he can’t refuse. And Mohr and his superiors in the world of above-board, offical German intelligence? They want an arrest. They have politicians to please.

A Man Most Wanted is based on the novel of the same name by John le Carré, scripted by Andrew Bovell and direced by Anton Corbjin, a longtime music video director whose best known films are Control, about singer Ian Curtis and the band Joy Division, and the George Clooney spy movie, The American. Neither of which I’ve seen. I hear tell they’re good. Guess I’d better take a look soon.

From what I’ve read about The American, A Most Wanted Man has a similar pace and vibe: slow-burning. It begins with the arrival in Hamburg of a mysterious Chechen/Russian, Issa Karpov (Grigoriy Dobrygin), who may or not be linked to a terrorist organization. Bachmann intends to find out. So too Mohr and Sullivan.

Karpov is put in touch with a human rights lawyer, Annabel Richter (Rachel McAdams), and a banker, Tommy Brue (Willem Dafoe), whose father knew Karpov’s father. Bachmann and his team (including German actors Daniel Brühl and Nina Hoss) are onto everyone from the start. Scene by deliberate scene, a plan of action emerges. 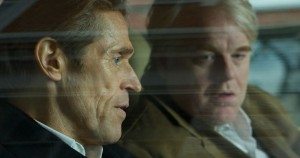 Bachmann “invites” the banker, Brue, to help out

It’s a slow build, this movie. At first it’s not easy to get into. Things are happening, but without much urgency or typical spy movie theatrics. This is not The Bourne Identity. Slowly the pieces come together, and at a certain point you realize every scene, every moment, has become nerve-racking. This is a movie where the climax includes watching a man sign a number of papers at a desk—and the tension is through the roof. Clever trick, that.

The performances are outstanding, yet Hoffman outshines everyone. It’s the kind of movie made all too infrequently nowadays: a well-crafted drama with top-notch actors that isn’t an indie flick or overwrought Oscar bait. There’s nothing flashy about A Most Wanted Man. But by the end, you feel as emotionally destroyed as Hoffman. 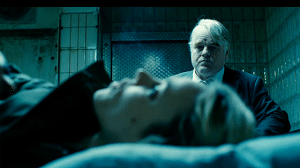 Bachmann has a friendly chat with the lawyer

About whom enough can’t be said. Is there any role he doesn’t give his all to? Any character, no matter how lousy, he doesn’t imbue with a depth of feeling most actors only dream of? He doesn’t play compromised characters by showing off their good sides. He revels in their shortcomings, and that’s what brings them to life. Bachmann isn’t a bad man and he isn’t a good man. He’s just a man. A man whose past weighs heavily, but not heavily enough to crush him. He fights on. He’s got a chance to do something good in A Most Wanted Man. Something meaningful. Something to make up for, in however small a way, what happened in the past. By the end of the movie, you need him to succeed as much as he needs to. Because if he fails…what then?

One response on “A Most Wanted Man: In Which Philip Seymour Hoffman Comes To An End”