It is extremely difficult to conceive of something truly, utterly alien. Go ahead and try it.

See? You’re just picturing a giant chartreuse octopus in jodhpurs. That’s not really alien. It’s just not something one sees every day. 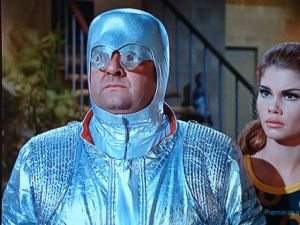 You could never understand me.

Most often — in science fiction films  — nothing gets any more alien than a dude in a mask, or lately the CGI equivalent. Alien creatures are blue humanoids with rocky heads. They’re robots with latex human faces! Can you imagine anything more alien than that? If you’re a typical Hollywood producer, then probably not.

Maybe you feel I’m being too harsh? Xenomorphs have inner jaws, you say. Big deal. So do tuna. Invader Zim has a squeedlyspooch! Feh. That’s like a spleen, only squeedlier. But, but, but the Na’avi communicate with their Ikran bird-dragon things via a neural braid! What Ever. That sounds indistinguishable from you using Siri to connect with your Brony pals to go BASE jumping. Utterly alien should be, sorry, utterly alien.

If you can describe it, then it isn’t all that alien. The idea that creatures from other planets have limbs, or concern themselves with locomotion is a grand assumption based on our experience of our world; i.e. not alien. Maybe aliens don’t have face parts, or senses like we’d conceive of them, or a desire to see celebrities with their kit off. Maybe they’re — as Douglas Adams postulated — just a hyper-intelligent shade of blue.

Maybe they’re not like anything we have experience with. Maybe aliens are utterly alien. I sure hope so. 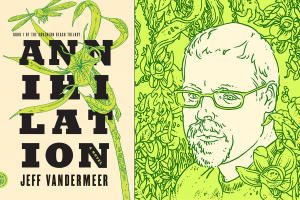 I’ve been thinking about this because I just read Jeff VanderMeer’s Annihilation, the first book in his Southern Reach Trilogy. It’s about things as alien as I’ve seen competently described.

Writing about forces and beings so incomprehensible as to be terrifying — this is no mean feat. It is practical, practiced insanity; madness forced into the boxes of words.

It is something which makes me happy in a small, frightened way.

Annihilation isn’t a movie — yet — but it could be soon, assuming Paramount Pictures decides audiences have the stomach for mass confusion. In this short novel, a team of four unnamed women set off on an expedition to the blockaded and mysterious Area X. This zone appears to have reverted to a natural state, but that couldn’t be more deceiving. What’s going on in Area X is alien in a way that warps minds, bodies, and geography.

The characters do not discover some gribbly thing that wants to meet their leader or eat their tender bits. They encounter things they do not, and cannot understand. It is not and could not be a guy in a mask. It might be depicted digitally, but if so, either our eyes wouldn’t process the information or the filmmakers will have done a shitty job. That’s alien. These instances and elements take the form of things that can’t be described — even in the book; only the confusion can be described. Other occurrences can be described, but not in a way that imposes order or meaning upon them.

Annihilation is a book that provides no answers. There is no key to this map. Perhaps all that’s coming in books two and three (published/being published in 2014), but I hope not. Answers are boring. Questions are fascinating.

Reading Annihilation brought another book to mind about a mysteriously infected territory and those that dare explore it — Roadside Picnic by Arkady and Boris Strugatsky. In that 1971 Russian novella, an alien race stops briefly on Earth and leaves behind areas corrupted by their presence and technology. Those who brave the treacherous landscape — either for science or profit — risk mutation, death, madness.

Stalker makes your dreams come true, or not.

A version of Roadside Picnic was filmed by Andrei Tarkovsky as Stalker. If you are stalwart of mind you might watch all 163 minutes of its terminally slow length. It’s not as compelling as the novel, but it does dare to tackle the utterly alien. So does Tarkovsky’s Solaris — and the remake by Steven Soderbergh — both based on the novel by Stanislaw Lem. The novel and both films explore just how difficult it would be for humans and aliens to communicate.

As if playing a few notes on an amplified keyboard could be the basis for communication, as in Close Encounters of the Third Kind, or some techno-magical device could instantly translate between English (and it’s always English) and Betelgeusish. Language is based on concepts and those concepts are based on how we sense reality. How do you think an intelligent shade of blue experiences a solar flare? Or a bacon double cheeseburger?

There have been all too few films that have addressed the utterly alien in a way that’s even vaguely adequate. 2001: A Space Odyssey brought us to the edge of alien. Then I’m having trouble coming up with anything else. But that’s because things that are truly alien are beyond our comprehension, and confusion rarely makes for good films.

So I hope they never make Annihilation into a film. Or if they do, they’re smart enough to get Jodorowsky to film it.

5 responses on “Let’s Get Utterly Alien: Annihilation, Stalker, and Solaris”