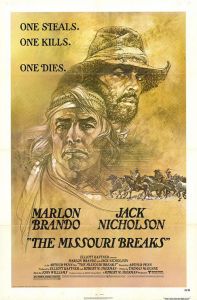 If you’ve ever had long, involved dreams about Marlon Brando as an Irish dandy prancing about the American west—and I know that you have—it’s time you watched The Missouri Breaks (’76), in which he plays a character not only from another country, but from another planet. He is without a doubt acting in a very different movie than anyone else in The Missouri Breaks.

When the movie came out, it bombed. Brando was singled out by critics and I assume all other humans for his bonkers performance. His accent is Irish most of the time, though it’s probably also Scottish and British depending on which words he’s speaking. He tends to whisper and mumble. He dresses in frilly cowboy attire I have a hard time believing anyone not in a movie wore before him. He enters the movie dangling off the side of a horse like an attacking Comanche, but he’s Brando and it’s ’76, so he’s an impossibly fat Comanche. 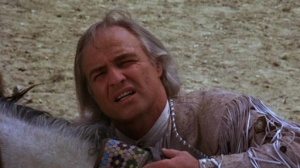 Brando sneaks up behind his horse

Brando plays Robert E. Lee Clayton, a regulator, which is a kind of law enforcer who works outside of the law, shooting evil-doers from a safe distance. Aside from his Creedmoor rifle, with which he’s a deadly shot, he uses another, unique weapon, one Brando invented himself, a kind of spiked, iron throwing-star. Sort of. We first see him use it on a rabbit, and later on a man.

Clayton arrives in town at the behest of a rich rancher, Braxton (John McLiam), upset at his horses being rustled. The rustlers in question are a gang led by Tom Logan (Jack Nicholson) that includes all kinds of fun actors: Harry Dead Stanton, Frederic Forrest, Randy Quaid, and John P. Ryan (of Five Easy Pieces and Runaway Train fame). One of their number is hanged by Braxton’s men at the beginning of the movie, in a scene shot so strangely I didn’t know the guy being hanged was one we’d just met. 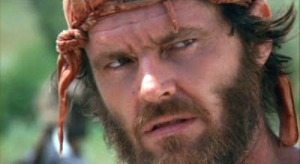 The rustlers have a problem: once they’ve stolen horses, they have to run them out in the open for miles to get them back to their ranch. They need a halfway hideout. Logan has an idea: why not a buy a plot of land right next to Braxton? He’ll never suspect!

This struck me as a terrible idea, but everyone in the movie thinks it’s swell, so that’s what they do. In the process, Logan meets Braxton’s hot daughter, Jane (Kathleen Lloyd), who makes eyes at him.

Logan and the fellas build a small house on their new land, and then they all take off for Canada to rustle up some horses, except for Logan, who stays behind to watch the place and grow lettuce. 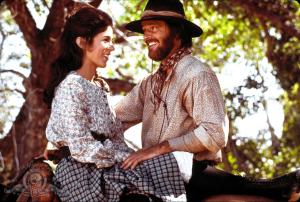 It’s then that Clayton, the mad Irishman, turns up. Braxton introduces him to Logan, and right away Clayton sees through Logan’s bullshit farmer act. He spies on Logan daily, and learns he’s romantically entangled with Jane.

Jane’s scenes with Logan are very strange. They seem to take place in the 1970s more than the 1870s. She desperately wants him to fuck her, which really throws him at first. But he comes around to the idea soon enough.

And that’s most of the movie. The fellas up in Canada trying for horses, Logan and Jane fooling around, Clayton keeping an eye on them. It is, in a word, a sloppy movie. Arthur Penn, coming off of another odd film, Night Moves, directed it, and novelist Thomas McGuane wrote it. McGuane had gained brief fame as a hot new writer before giving up on novels and turning to screenplays, of which The Missouri Breaks is the best known. It’s a low-key mess. Penn doesn’t help things. It has the feel of a movie very quickly made. The editing is lazy, the production design is minimal, and the story is barely there. 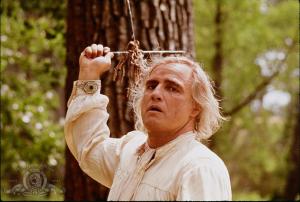 Brando shows off his little friend

Of course thin stories are the hallmark of ’70s cinema. The best movies of the era are often all about character. The Missouri Breaks goes for the same thing, but with limited results. Nicholson gives the movie’s best performance. It’s so good I wish it was in another movie. The other guys in his gang are fine too, but they aren’t given much of anything to do. Harry Dean Stanton has one nice scene talking about his childhood, but it’s too brief, and after that, nothing.

In recent years, The Missouri Breaks has gained a little more love, and even Brando’s performance has found supporters. It’s certainly compelling. It’s not one of those ‘60s roles he slept through. Yes, it’s completely at odds with everyone else in the movie, but as a thing in itself, it’s fascinating. Overall, the movie has a relaxing, easy-going ‘70s vibe I enjoyed, even if the story and characters never made much of an impression. Which is to say, if, like me, you have a thing for this style of ‘70s filmmaking, it’s worth watching. But be in the right mood. It’s not going to blow you away. It’s going to make you say, “Huh. That was interesting.” Which sometimes is enough. 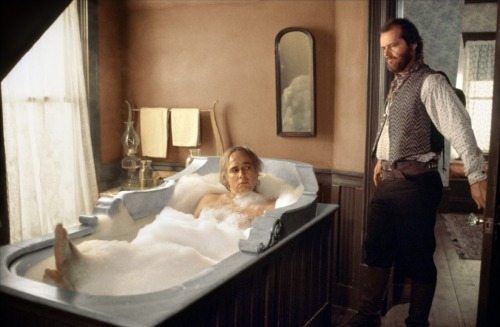 The fellas have a chat

6 responses on “The Missouri Breaks Isn’t All Broken”