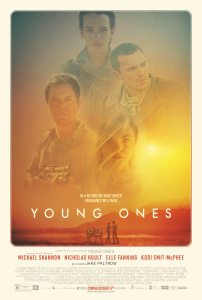 It’s been a while since I watched Jake Paltrow’s sci-fi feature Young Ones, in which Kodi Smit-McPhee and others struggle towards adulthood in a parched future. In the intervening days, I’ve tried hard to come up with the motivation to write something about it.

Here’s what I’ve got: I feel Young Ones is trying very admirably to be a movie one might wish to see.

Young Ones looks like a movie. It sounds like a movie. Actors act and light and sound intermingle to create drama. Yet I watched Young Ones with a slackening of jaw and a drooping of eyelid. It is a movie without throb or churn. The most fascinating character in it is a mechanical bovine, and the film stars esteemed thespians Michael Shannon, Nicholas Hoult, Elle Fanning, and the fore-mentioned Kodi Smit-McPhee.

Not too shabby a cast, huh? Plus, of course, the robot cow (Vin Diesel)(Just kidding). 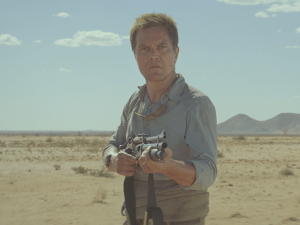 I will kill you for trying to steal my no water.

Young Ones begins in an un-named American state, one deprived of water by drought and federal interests. Shannon plays Ernest Holm, a tough but tender-hearted ex-alcoholic who knows his desiccated land could thrive if only those roughneck water pipeline workers would relent and illegally rain on the plain. Ernest has a son, Jerome (Smit-McPhee), who is old enough, dag-nabbit Pa! and a wild daughter, Mary (Fanning), who wants to party-all-the-time with the dreamy but disreputable Flem Lever (really)(Hoult).

I’m already worn out trying to explain this film and I haven’t even gotten started. There’s murder and betrayal and a mom (Aimee Mullins) who’s paralyzed and needs some special spine aerial track system to move around. People fill up with water at the gas station and beg for it at the side of the road. Times, they sure are tough, hey? Paltrow’s script hovers over these characters and situations like a teacher’s red pen, not licensed to fully create, only empowered to nudge them in one direction or another. 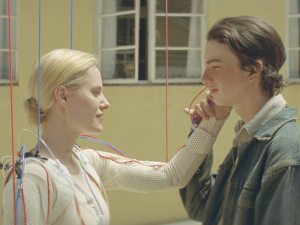 Who pays for this spine robot? Dunno.

Needs improvement. See me after class.

Described as “a futuristic western, told in three chapters, which inventively layers Greek tragedy over an ethereal narrative that’s steeped deeply in the values of the American West,” Young Ones lands like an overturned bowl of steaming pudding. Ernest gets himself kilt and Flem and Mary lambada lustfully and young Jerome must find his way to adulthood amid a barren landscape of corrupted morals. Many of these scenes and moments are pleasant to behold in their washed out, dusty color. Shannon’s character is practically the only personality a viewer can invest in, though, and he makes with the freshly dead in Act I. From then on it’s all ideas writ-large — and too large to focus on. 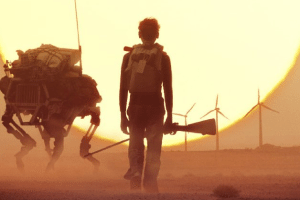 Let’s go to Tosche Station, pick up some power converters.

But the mechanical cow. When Ernest’s donkey breaks its leg making the trek down from the Water Works camp, the animal is replaced using the Holm’s last fistful of cash, which goes neither to Mrs. Holm’s spine system nor water, but towards a four-legged robot shopping cart.

This conveyance moves awkwardly but surely through Young Ones, toting whatever, looking dolefully out its laser eye, resembling a cow that needs a kind word but won’t get it.

It is this robot that I felt the most for. It receives an unfair share of abuse, yet continues on stoically, observing and moving forward however it can manage. Reminds me of a blogger I know. Someone I can’t quite place just at this second.

To tell you how Young Ones plays out would spoil what there is to be spoiled. Paltrow has set forth ambitiously but failed to learn the lesson of his own story. It is rampant ambition that does in its antagonists. It is the reluctant acceptance of hard truths that makes, of its protagonist, a man.