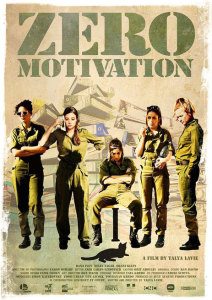 If you believe the characters in the Israeli comedy Zero Motivation, war is hell because war is hella boring. Writer/director Talya Lavie’s film takes M*A*S*H, cuts out all the surgeons, and leaves us with the story of just the administrative slackers who decline to mop up the mess. Picture Radar as a young woman with zero motivation and you’re starting to get the drift.

It’s an odd film that shouldn’t work as well as it does, but sometimes lethargy wins the day. Or at least that’s what I keep telling myself.

Main characters Daffi (Nelly Tagar) and Zohar (Dana Ivgy) loathe their posting at an Israeli Defense Forces base somewhere out in the desert. Amid the bustle of soldiers and officers, these two are in charge of mail and paper shredding, crammed in beside a bevy of other lackadaisical females. It’s like summer camp, except everyone is armed and all the classes are cancelled. Putting aside their crucial document disposal and dispersing tasks, Daffi and Zohar mainly play Minesweeper, write letters begging for a transfer to Tel Aviv, and prove just how ineffective a person can be when she puts her mind to it. 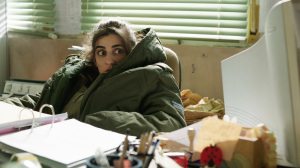 Israelis have mandatory military service. Someone’s got to not make the coffee and fuck up the filing.

Zero Motivation rolls along with the humor of a show like Reno 911, except it trades preposterousness for some dark derangement, roping in suicide, demonic possession, date rape, and the holocaust for a few laughs. Thing is, it’s pretty funny in a slothful, disheveled way. While the situations and characters are outsized, you can tell Lavie’s poking fun at the way things really are. So comedy based in truth. Which makes Zero Motivation as good an argument against the draft as any I’ve heard. 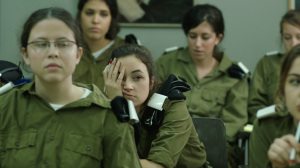 The film is split into three vignettes that spiral us deeper into the particular miseries of Zohar, Daffi, and others, primarily their commanding officer, Rama (Shani Klein), who dreams of making something of herself in the military. This is her misfortune, but there’s plenty to go around.

As a story, the script has highs and lows. We mostly deal with caricatures, but that doesn’t mean they don’t resonate in their absurdly awful situations. Lavie also swings wide through a few turns, roping in elements that suggest she couldn’t find humor in any of the inside lanes quite as often as she might have. Visually, the film is sedate, with muted, dusty colors that accentuate the dreary monotony of army life. 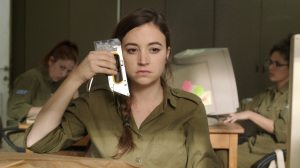 Taken as a whole, Zero Motivation mostly works. It never exactly feels like a film, but then being televisual isn’t the slur it used to be. The film keeps on its toes at least. If the cast and director occasionally stumble into a bit of amateurishness, they also contrast that with the bulk of what appears on screen. In a strange way, it reminds me a bit of Tom DeCillo’s Living in Oblivion. Here are people living waking nightmares, and isn’t that amusing?

As it turns out, I don’t watch a lot of Israeli, female-driven military comedies. I rarely get in staple gun fights, or destroy government documents, or try to pick up paratroopers. I can, however, relate to playing a lot of Minesweeper.

I’ve had a day job. Zero Motivation made me recall those days with zero fondness. It also made me think of my friend Dorit, who was an actual minesweeper for the IDF. I don’t think she beat any time records, but she also didn’t get herself killed, and that seems more important.

War is hell. If that hell materializes as boredom, sounds like we’re doing it wrong in all kinds of ways. Now go make me some coffee.