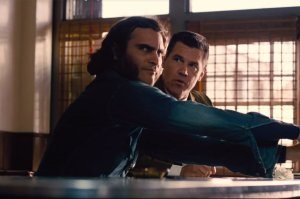 Doc and Bigfoot have a moment

In Inherent Vice, one of Thomas Pynchon’s breezier and easier, if not necessarily less loopier, both narratively and imaginatively, novels (V., Gravity’s Rainbow, and Against The Day it ain’t), a 1970 stoner P.I., Doc Sportello, stumbles into a spiderwebbing plot of indeterminate origin, meaning, reach, and resolution—especially resolution, you could knit the world a sweater with the loose threads left dangling—when an old girlfriend, Shasta Fay Hepworth, turns up admitting to an affair with a wealthy straight-world real estate developer, Mickey Wolfmann, whose philandering wife wants him committed to the bughouse, a bughouse owned, it will turn out, by a shadowy consortium of dentists and Asian heroin producers, and asks Doc to, well, to what, exactly, isn’t clear, to investigate, to help, to make some sense of whatever it is looming not only over Shasta and Wolfmann, but over the entire Los Angeles hippie scene, gone scary and sour since the Manson murders, only to vanish the moment Doc starts digging, she and Wolfmann both, leaving Doc to the mercy of his curiosity, faulty memory, and the machinations of his nemesis, flat-topped, thick-headed cop, Bigfoot Bjornsen, who needs and despises Doc as much as Doc needs and despises Bigfoot. 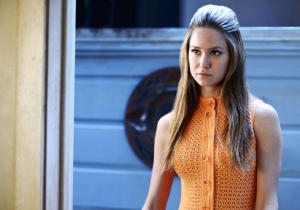 So, not necessarily a book ripe for a movie adaptation. None of Pynchon’s books are, and none have been adapted until now. Paul Thomas Anderson took it on aiming to make a Raymond Chandler mystery by way of Robert Altman and Cheech & Chong.

He is moderately successful. Visually, he creates an L.A. dark and empty and foreboding. Few people show up but for the ones directly involved in the story. No crowded beaches or street corners, no traffic jams. Just wide shots of empty lots, imposing buildings, small underlit rooms, and the ocean. The feeling this creates is one of disorientation and tension. Which suits Doc’s mood.

Doc is played by Joaquin Phoenix with fantastic facial hair and enough hippie panache to carry the movie. He’s in every scene. Most of the other actors show up only briefly to reveal or more often conceal information and play off of Phoenix. They seem to be enjoying themselves. Martin Short as Dr. Rudy Blatnoyd, Eric Roberts as Wolfmann, Owen Wilson as Coy Harlington, Hong Chau as Jade, Josh Brolin as Bigfoot, playing him like a villain in a Bugs Bunny cartoon, and many more all do fine work. 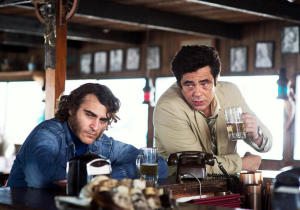 Like any classic noir, once Shasta Fay (Katherine Waterston) lays out her woes in the opening scene, Doc investigates, but unlike any classic noir, nothing anyone tells him makes any sense or has any reason for being revealed, except that, mysteriously, every single person Doc comes across ties into the plot, which plot, of course, makes not a lick of sense, is never resolved, and isn’t the point of the movie.

The point of the movie, like the book, is to evoke a sense of paranoid dread–the carefree hippie era is over, and what’s replacing it looks mighty grim–and tell funny jokes. It works better in the book. Pynchon has words to play with, pages and pages of beautifully swirling words. Forced to reduce those magnificent words to concrete scenes, Anderson has to cut out everything but the plot. So scene after scene is nothing but people explaining what can’t be explained. It’s all exposition, but exposition that does nothing but increase Doc’s (and our) confusion. There’s almost no pacing to the movie. Scene after scene plays out with no sense of motion. The one scene with a different length and feel comes maybe three quarters of the way in when Shasta reappears to seduce Doc. It’s long and slow. Shasta gives a lethargic speech about I have no idea what, because who cares? Waterston plays her with this overstated cliché-hippie-tired-dreaminess I found trying. I suppose I cared about Doc, his being the protagonist, but then again I never felt connected to him. I never quite related to him the way I did to his most obvious filmic predecessor, the Dude. Doc’s funny and sympathetic. I was interested to see what he’d do. But I wasn’t concerned with his fate. 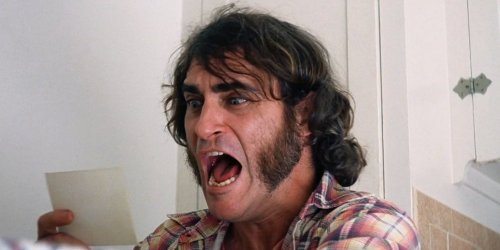 You don’t want to see that photo

So this movie meanders along for two and a half hours, and it’s not exactly boring, it’s too weird and Phoenix too engaging for that, but with the story not actually going anywhere, it feels like it could end after almost any scene. Anderson creates an ending not found in the book by making Shasta more integral, which makes sense emotionally. He needed something to tie the movie together. Does it work? Sure. Why not? It could have ended anywhere.

A few scenes are genuinely hilarious. Many more are funny in a more cerebral kind of “heh, yes, that is funny” way where you don’t actually laugh but appreciate the joke. Many others are merely odd. I read that Anderson wanted to pack every frame with gags ala Airplane! and Top Secret!, but he doesn’t go nearly so far. One nice running gag is Doc’s notebook, in which he scrawls information of dubious utility. Maybe funniest of all is Josh Brolin. Bigfoot is a bizarre character in the book, one translated just about verbatim in the movie, a flat-topped cop with a side gig as an extra in the movies who spends his days violating civil rights and bad-mouthing hippies, though deep in his secret heart he wishes he were one. 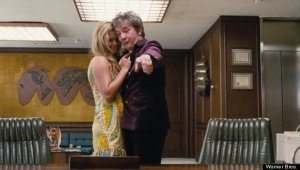 It’s the rare writer/director who, when adapting a novel by a favorite author, can resist adding voice-over, and Anderson is no different. The voice of Pynchon’s omniscient narrator comes by way of Joanna Newsom as Sortilège, which gambit is a bit wonky. She turns up in a few scenes, but plays no role in the story. It’s unclear why she should have the knowledge she does.

I liked Inherent Vice better than Anderson’s last movie, The Master, but then I’ve never been a big fan of his movies. I always find a lot to like in them, but overall I tend to find them wanting. Inherent Vice has a vibe I enjoyed. Might have helped that almost all of the dialogue comes directly from Pynchon. The man has a way with words. I wouldn’t exactly recommend the movie, but then again, I wouldn’t not recommend it, either. It’s a strange beast.