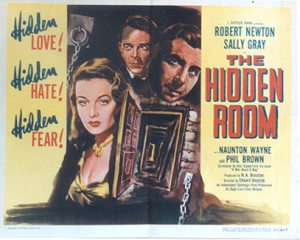 I’ve once again enjoyed the holy bejeebus out of the annual Noir City Festival in San Francisco this past week, in which 20+ classic noirs are screened on 35mm, often from beautiful archival prints, many of which are not available to watch anywhere else. And every year there’s at least one movie, if not two or three, that I absolutely love and can’t believe isn’t on DVD or streaming or even so much as hiding out in an abandoned box in a forgotten storage unit on VHS.

I thought I’d be cursed to the same fate this year after watching the wonderful, Robert Siodmak directed, Charles Laughton starring The Suspect (’44), as perfect a B-movie noir as ever there was. It’s nowhere to be found on home video. What’s the point of writing it up if no one can watch it?

I’m afraid I’m going to have to kill you, my dear boy

But then I saw The Hidden Room (’49) (original British title: Obsession). You should too. And you may! It’s streaming and on DVD. Probably in dismal quality, but better than nothing.

Directed by the great Edward Dmytryk, of Murder, My Sweet (’44), Crossfire (’47), and The Caine Mutiny (’54) fame, among a long list of credits, the film takes place around London, where Dmytryk had been forced to flee due the Communist witch hunts taking place in Hollywood. It’s written by Alec Coppel (co-writer of Vertigo, among others), from his own unpublished novel. The dialogue is crisp and dry and often very funny.

The Hidden Room is that classic of classic murder stories in which the protagonist, the would-be murderer, is himself a fan of murder mysteries, and has thus, knowing the pitfalls ever fallen into by sloppy murderers, devised for himself the Perfect Murder. 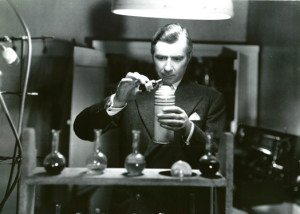 Our murderous anti-hero is Dr. Clive Riordan, played with the utmost in British cool by Robert Newton. We meet him as he prepares to enact his scheme, which begins late at night, in his own home, where he awaits the return of his wife and her latest plaything, an American chap, Bill Kronin (Phil Brown). Needless to say, they’re in quite a spot, having been caught out this way. And they’re in an even bigger spot once Riordan pulls a gun on them, and says matter of factly that he’s going to kill Kronin.

One great pleasure of The Hidden Room is how damned gentlemanly everyone is. They’re just delightfully British that way, or in the case of Kronin, cheerful and straighforward in that American way. Nobody yells. Well, Riordan never does, anyway, and neither does Superintendent Finsbury (Naunton Wayne) of Scotland Yard, once he starts nosing around. Both men, no matter what troubles arise, are calm and gentlemanly to the last. 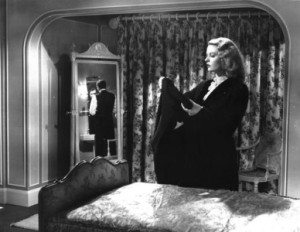 The wife, not in the least bothered by her vanished American pal

And why the interest from Scotland Yard? It seems Mr. Kronin has simply disappeared. The last we see of him is in that opening scene at Riordan’s house. Riordan explains, gun in hand, that he’s taking Kronin somewhere…else. Fade out.

Now, we do meet Kronin again. But where and why and how and so forth is the meat of the film, and there’s no point spoiling it. Best if one remains wholly ignorant going in. The important part is that it’s all a part of Riordan’s plan, his masterful, foolproof plan.

Alas, poor Riordan. Knowledgeable as he is about crime stories, he knows nothing about film noirs. If he did he’d know he was doomed the second he put his plan into action. Because as one writer, with but two words, famously summed up the entire genre: “You’re fucked.” Indeed. Riordon couldn’t be anything but.

And and as if a finely written and acted and directed, tense and evil and dark film noir you’ve never heard of isn’t enough, it also contains an original score by the great Nino Rota.

So there we are. An under-the-radar lost noir gem you can actually watch. Enjoy.