What with Hollywood’s tradition of dumping their crappiest of crappy movies on our heads come January/February, you’d be wise to spend your movie-going-dollars this winter not at ye olde multiplexopolosity, but at SF Indie Fest. Naturally this applies more to those of us living in the SF Bay Area. For those of you in the rest of the world, I recommend watching/rewatching Being There, like I did just last week, because if a (new) movie better than Being There plays anywhere on Earth this year, I’ll eat my own spleen. 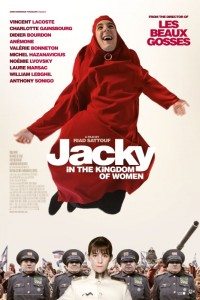 But returning to Indie Fest. These folks always pick a slate of curiously weird flicks. Granted, not everything they show is going to knock your socks off. Some will curl your toes and curdle your coffee. That’s the fun of festivals. Guessing.

Lucky for you, guessing isn’t your only option. I’m here to tell you that the closing night film, Jacky In The Kingdom of Women (French, original title Jacky au royaume des filles), is not to be missed.

It’s set in the fictional Popular and Democratic Republic of Bubonne, a country run by a military dictatorship entirely comprised of women. In Bubonne, women are in charge. Men are relegated to household chores and dress in burka-like robes. And everyone worships horses. Which they refer to as horsums. One of the joys of the movie is the language. Kudos to the translators for coming up with an internally consistent English scheme for all of the nutty Frenchums. 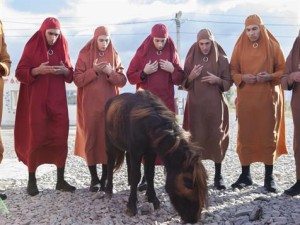 Jacky (Vincent Lacoste) is a young man living with his mother in a village of identical houses housing identical young men and their families, the plebians. Jacky is obsessed with the Colonel (Charlotte Gainsbourg), daughter of the General, and next in line to rule Bubonne. Likewise obsessed are all eligible bachelors. Imagine their joy when it’s announced that it has come time for the Colonel to be wed. She will pick her husband—the Big Dummy—at a grand ball. 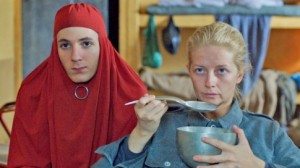 If this is beginning to sound like Cinderella, it’s no accident. It’s a movie rife with role-reversals, which in hands less deft than writer/director Riad Sattouf’s might come off as too-easy jokes. And they are too easy, even in Sattouf’s hands. But his world is detailed enough to feel plausible, and watching the men squabble over new robes and bejeweled leashes while the women make salacious comments and extort sexual favors is endlessly amusing.

Complicating matters for Jacky are his two obnoxious cousins, one of whom receives a vision from the scared horsum claiming the other is destined to become the Big Dummy. Worse yet, Jacky’s uncle is the leader of the male underground, and revolution is stirring. What does Jacky want with revolution? All he cares about is being Big Dummy to his true love, the Colonel. 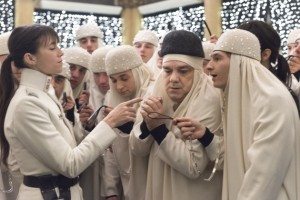 No, take MY leash, Colonel!

Sattouf has a number of targets to skewer in this farce. Primarily patriarchal socities, military dictatorships, and the treatment of women in Muslim societies. He keeps matters just silly enough not to be offensive. Or so I found. Presumably certain inflexible religious adherents would feel otherwise. But screw them. They’re the reason we need movies like Jacky.

Gainsbourg is excellent as the conflicted Colonel, whose attraction to Jacky, at least when he’s disguised as a woman, is immediate and powerful. So too Lacoste as Jacky, a perfectly sincere yet goofy leading man. Everyone in the movie understands that to play comedy, especially comedy this silly, one must act with the utmost sincerity.

The final scene, which I’m certainly not going to describe, is quite the surprise. I’m not sure it makes sense in terms of character; it’s more an intellectual, thematic surprise. But what the hell. It gives you something to talk about leaving the theater, that’s for sure, and an image you won’t soon forget.

And if you miss it—or you’re busy somewhere watching Being There—keep an eye out for the eventual home video release (alas, I hear it won’t be getting U.S. theatrical distribution). 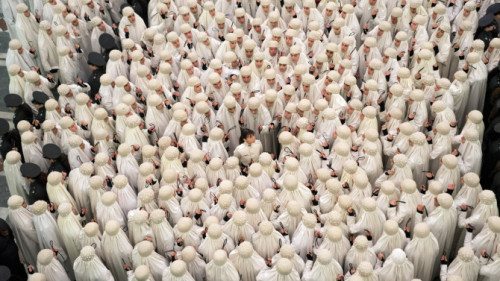 There’s something almost religious about it, isn’t there?