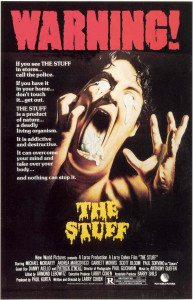 I wish I could say that Larry Cohen’s 1985, low-budget, weird-ass horror movie, The Stuff, is delightfully bonkers or wickedly funny or even just plain old bad-movie-blissful, but I can’t, because mostly watching The Stuff is about as fun as being pelted to death with moldy turnips.

A shame, coming from Cohen, known for such classics as It’s Alive and… well, and other odd if not exactly classic movies like Q: The Winged Serpent and God Told Me To and the screenplays for the Maniac Cop series.

Like his best movies, The Stuff has a great premise. There’s a new sort-of-dessert treat called The Stuff, a white goo discovered in the opening scene bubbling up out of the ground, that’s delicious, calorie-free, and, unbeknownst until much later, sentient. Once you eat enough of it, it takes over your brain, then eats you up from the inside out, leaving behind nothing but a shell.

Consumed by our own consumerism! Zombified by our capitalistic greed! 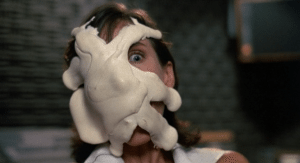 Not a bad theme. Problem is, one needs more than a premise and a theme to make a good movie. The Stuff plays out as a random assemblage of scenes having only the most tangential relationship to one another, like maybe Cohen took parts of a bunch of unproduced screenplays and shuffled them together, adding in tubs of The Stuff to give it the appearance of continuity.

It stars Micheal Moriarity as Mo Rutherford, a wise-cracking industrial spy hired by an ice-cream consortium to find out what The Stuff is made out of. I think he’s supposed to be a sort of Han Solo type of bad-ass, but comes across as the kind of dumbest man in the room who thinks he’s the smartest man in the room. He’s like a slightly brain-damaged comedian with a bad southern accent. 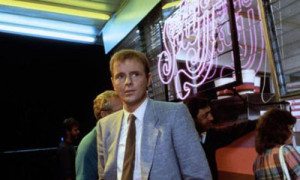 Our hero, surrounded by The Stuff

Garrett Morris turns up as Chocolate Chip Charlie, whose cookie stands have been overtaken by The Stuff. He and Mo team up for all of one scene before Mo insists they split up. Right, good plan. Keep the other nutty character off-screen. Morris shows up once more, but only because The Stuff got him. But like I said, The Stuff doesn’t really function as a “movie,” in the sense where one scene leads to another. Cohen has said in interviews that he doesn’t believe in all of that “screenplay structure” bullshit, and just writes the way he wants to write. Which sure, if he was Herzog and said that, you’d raise your fist in solidarity—fuck the rules, man! Do it your own way! 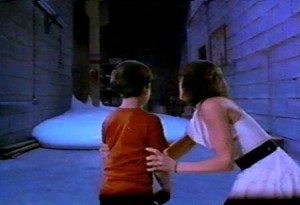 But in this case, any form of story-telling logic would have been nice. Any story at all would have been nice. Instead of which we get a little running and shouting and the army turning up, led by a grim Paul Sorvino. You could build a house out of his first scene with Moriarity, it’s so wooden.

The Stuff itself gives the movie its few tolerable moments, as it bubbles up from the earth, slorps out of pillows, leaps on faces, crawls around inside of refrigerators and whatnot. Best of all are the faux commercials and jingles advertising The Stuff.

Worst of all is everything else. If you’re looking for a movie not to watch, I hereby recommend The Stuff. 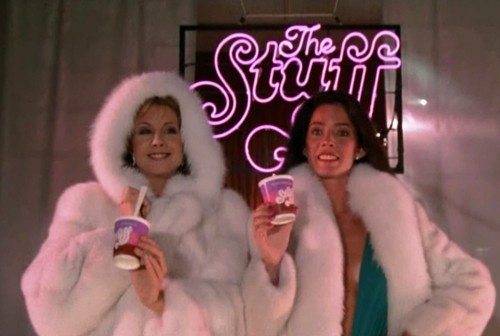 One response on “What Not To Watch: The Stuff”