Don Hertzfeldt is a mad genius of animation. Or at the very least a slightly irritable one. His newest short, the 16 minute World of Tomorrow, proves it. The genius part, I mean. Then again, so does just about everything he’s ever animated. You’re probably familiar with some of his work. If not, start by watching his Simpson’s couch gag intro from 2014:

If anything weirder has ever appeared on network television, I’d be very curious to see it.

Now go back in time to 1998 and enjoy this short about balloons, Billy’s Balloon:

If five minutes of rampaging balloons beating up small children doesn’t leave you laughing up a lung or two, I fear for your sense of humor. What could be funnier?

Hertzfeldt has long animated by hand, shooting on 16mm and 35mm film, using photographs, multiple exposures, and creating various effects in-camera. Only recently has he begun creating shorts digitally by drawing on a tablet. His skill with his new tools may be seen in the above Simpson’s intro and in World of Tomorrow.

Memories extracted from the dead

Visually, World of Tomorrow is unlike anything I’ve ever seen. It reminds me a very little bit of Tron in its use of glowing, abstract shapes. It’s unique in the way it sizzles and floats and pops and shimmers. It’s beautiful.

The story is perfectly straightforward. A little girl, Emily, receives a sort of phone call from one of her clones some 200 years in the future. Future Emily, using experimental time travel, zaps little Emily into her future, and gives her a tour. It’s a stark and lonely place. Future Emily, being a third generation clone, isn’t fully functional on an emotional level. She tells of the time she programmed robots on the moon to fear death and fell in love with a moonrock. Later she has a years long relationship with a one-eyed monster named Simon. She’s troubled, to put it mildly, but too simpleminded to feel as sad as she should about her life and her fate. 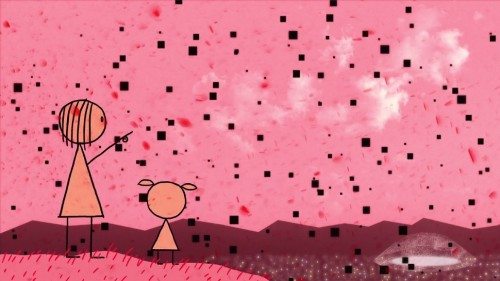 The rich upload their brains into cubes

Things aren’t looking good for any future humans. Hertzfeldt has long had a kind of bluntly sad yet hopeful take on life. Sort of. Little Emily being a very little girl, her visit to the future is a magical adventure, not a haunting omen of doom foretold, one to be remembered fondly by her future clones. The theme of the movie is that one ought to enjoy life while it’s happening, and this little Emily does. Of course the mental state of her future clone suggests this lesson will be lost. Ah well. What has to be will be.

Hertzfeldt previously told a tale of the future in The Meaning of Life, a short from 2005. Life evolves physically, he suggests, but perhaps not in any other way:

Hertzfeldt’s longest work is the best summation of his worldview. Comprised of three 20ish minute shorts, from 2006, 2008, and 2012, It’s Such A Beautiful Day tells the story of Bill, a man in a hat with an unfortunate medical condition. We learn of his past and his future and go on a pretty wild philosophical trip to boot. Though it’s made up of three separate shorts, they don’t feel separate. The movie plays like a single story (though at 62 minutes, may we technically call it a movie? Sure! We can do anything we want!). For much of its running time, it’s hilariously dark and depressing, yet manages toward the end, as its story spirals into something more, let’s say, galactic, to become heartfelt and hopeful. It’s really rather lovely. 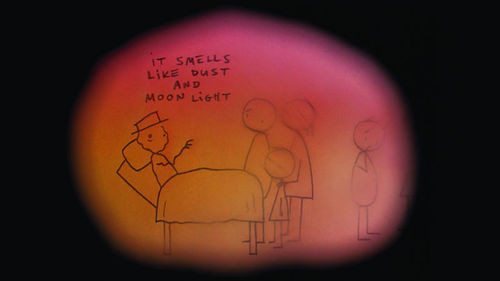 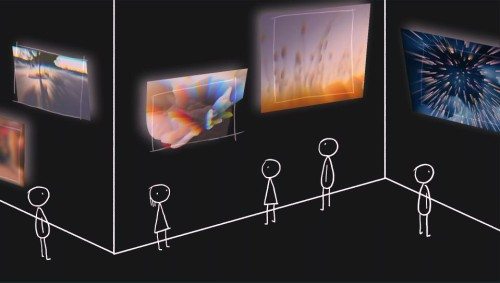 Hanging out at the memory museum

Somewhere or other I read that Hertzfeldt was looking to recreate the vibe of old science films of the ’50s and ’60s, where kids are taken on a Tour Of The Future or suchlike, a future filled with hover cars and Martian cities and self-cleaning ovens and whatnot. This he has achieved. I’d like to see World of Tomorrow shown in every school everywhere immediately. Why? Because knowledge is good.

One way to see World of Tomorrow is at the now-running SF International Film Festival, as a part of their animated shorts program. Another somewhat easier way is to buy it on Vimeo for a mere $3.99, like I did. It’s well worth it. If Hertzfeldt keeps making movies this lovely, be they long or short, I’ll keep paying for them.

Let’s wrap this up by revisiting his brilliantly weird-ass short from 2000, Rejected, because, truly, Don Hertzfeldt is a man whose spoon is much too big.