Are all talk show hosts mentally unstable narcissists? Were one to watch a talk show—which I do not advise—one would be forgiven for thinking so. Mostly because one would be right. Whether they’re interviewing movie stars, baking cakes, or giving away free bees, talk shows are only ever about one person: the host. And, sometimes, their bees.

Equating severe mental illness with the desire to host a talk show would be excellent fodder for a comedy, one would think. In fact one has already thunk it, way back in ’82. Martin Scorsese’s The King of Comedy starred Robert De Niro as a troubled man desperate for talk show fame. Not exactly the funniest movie ever made, but weirdly enjoyable. 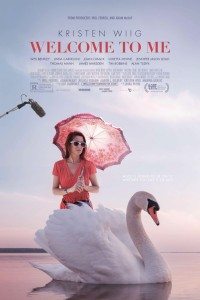 Welcome To Me, a new movie about a woman with borderline personality disorder who after winning $86 million in the lottery starts her own talk show, is also not the funniest movie ever made. Plus it turns out not to have anything to say about talk show hosts. What it turns out to be is a predictable, by-the-numbers indie-plotted bit of fluff about being nice to to your friends, because, it’s like, they’re your friends, you know?

Kristen Wiig stars as crazy lady Alice Klieg. She mutters to herself, eats a lot of yogurt, and watches reruns of Oprah on VHS tapes. She also plays the lottery. One day, she wins. In short order, she turns up in the audience of a local TV station’s show about nutritional supplements, creeps out the host and the crew, and writes a check for $15 million to have her own talk show produced. What will her show be about? It’ll be about her. And whatever she feels like doing and saying. 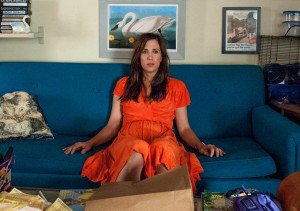 Up to this point, Welcome To Me, written by Eliot Laurence and directed by Shira Piven, is funny and slightly odd and full of potential. Alice is exactly the sort of twitchy weirdo Wiig excels at, and the trajectory of the movie suggests it’s going to plunge ever deeper into the unlikely repercussions of a deranged woman having the means to do exactly what she wants.

At first, it does just that, simply by presenting her show. It’s predictable in one sense: you know it’s going to come off as a disaster at first, then turn into something bizarrely compelling. Alice spends five straight minutes eating a slice of meatcake, has bad actors recreate slights from her past, and eventually uses her past skills as a veterinary technician to neuter dogs live on television.

She starts an affair with Gabe (Wes Bentley), the host of the supplements show, and when a college kid comes to interview her for a paper he’s writing on the genius of her show, she blows him in the back of her limo. 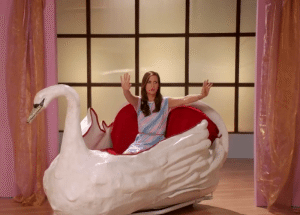 What’s next? Will her show go national? Will she be bigger than Oprah? How far will this movie push its satire?

Banal cheese is next. The show goes nowhere. Alice has an accident on set, plunging her into depression. There is no satire.

It’s as unfortunate a change of gears as I can remember. There are plenty of laughs in the first half. As the second half unfolded, I wanted to flee the theater, or set it on fire, or no, set the filmmakers on fire.

With the exception of the funny set-up—crazy lady hosts own talk show—Welcome To Me is as bland a Sundance-style indie as I’ve ever seen. It makes Little Miss Sunshine look like Zardoz. 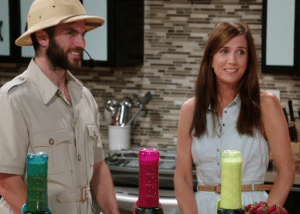 It brings to mind Nightcrawler from last year, another movie about a mentally unstable individual who sets his sights on a goal and does whatever he has to to achieve it. But the beauty of Nightcrawler is how it doesn’t shy away from its satire or resort to generic plotting or sputter out into a toothless story about personal redemption. It takes its premise to its necessary endpoint, fearlessly.

Welcome To Me does the opposite. It chickens out. The finale, which is, surprise, one last special edition of Alice’s show, is without a single laugh. It’s like watching a Very Serious Episode in a sitcom’s ninth season. The only stakes in the movie turn out to be whether or not Alice makes up with her only friend, Gina (Linda Cardellina), which she does by giving her a shitload of money. Inspiring stuff. 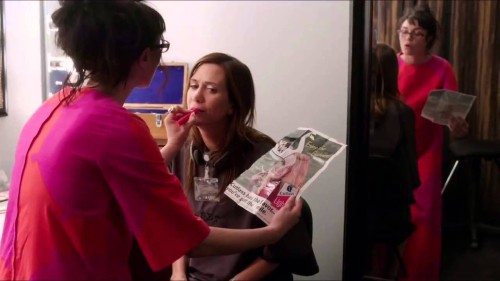 Will Ferrel and Adam McKay produced. Presumably this is why such actors as Tim Robbins, Joan Cusack, and Jennifer Jason Leigh are in the movie. At least Robbins and Cusack have something to do, more or less. But JJL? She does nothing. She plays a woman working at the TV studio who’s appalled that Alice gets to do her stupid show. That’s it. That’s her whole character. Her few scenes feature her making exasperated faces.

Movies that end badly are the worst. They spoil the goodwill they generate at the outset. I liked Welcome To Me for as long as it seemed to be headed into twisted, uncharted territory. It’s very funny…until it’s very not funny.

One response on “Welcome To Me: Half Funny, Half Insufferable”