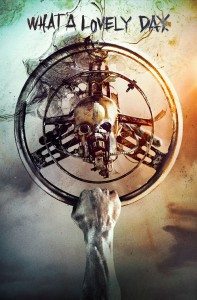 The latest of George Miller’s four Mad Max films—Mad Max: Fury Road—is cataclysmically, unrelentingly action packed, like a room full of toddlers hopped up on PCP and strapped to power saws, told that only the last of them standing gets the graham cracker. There is an evil, brilliant strain of sadism to the film’s mayhem. From the shiny chrome on its lips to the rough sand in its gears, Mad Max: Fury Road bleeds, howls, and, more often than not, explodes with insanely real action.

But even though the action is real—mostly staged using real cars, real drivers, and what’s known as practical effects—it does not feel real.

It is the same with Fury Road‘s stripped down story—a tale so basic it barely exists. The plot’s elongated plume of carbon dioxide leaves one with the feeling that’s summarized as frequently as ‘no’ as it is as ‘yes.’

Mad Max: Fury Road is so very. So very very. Like a cartoon, or a comic book, or a full-fledged fantasy composed solely of flaming post-apocalyptic exhaust fumes. That’s what I wanted and not at all what I wanted from George Miller and the fourth outing of Max Rockatansky.

I’ll get into it, but not before the obligatory SPOILER WARNING.

Watching The Road Warrior—a film it feels unfair to compare anything else to—one feels trapped in a crazed world that’s devoid of choice or meaning. Everything is the end. These people: doomed. This society: untenable. This child: feral and, even should one care to try, likely beyond redemption. This man: Max, mad Max Rockatansky, having lost his family to Toecutter’s gang, he now rides the wasteland in the last of the V8 Interceptors looking for what?

Just gasoline, just to keep going, to run and not stop. 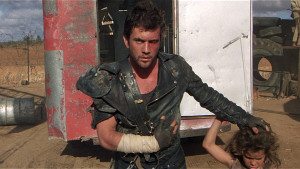 When the world he stumbles into explodes and rains down burning rubber, that damage sears. That pain is indistinguishable from anything else around us. You could no more trim it from the film than you could survive on fragments of windshield.

But in Mad Max: Fury Road, it’s not the same. The explosions here are grander, ultra orange, backed by screaming guitar played live by a gimp strung in front of a truck of sound—but the damage is never mistaken for real. It’s seen, not felt. While Miller has bothered to create real action sequences that don’t originate in a computer, he has so thoroughly adjusted them digitally that their sense of tangibility goes flaccid.

Cars crash and men walk away unharmed. A woman falls under the wheels of the War Rig but she still looks as silken and smooth as when she washed in clean water. The desert screams in amber and teal and you ask yourself: where is this world, because it is not mine, even once irradiated.

Compare, for example, these two images:

At the top, the Lord Humungus from The Road Warrior, in a plain of dust that could be anywhere, wearing an outfit you might cobble together yourself if you found yourself bereft of polite society and completely insane. At the bottom, Immortan Joe from Fury Road, in a color-corrected landscape populated by people who feel that the world has failed to invest enough time and money in Burning Man, and despite living on the ragged edge of a ruined world with tumors they name, they spend their energy imprinting skull emoji on everything from Furiosa’s neck to the cabs of trucks to steering wheels.

Branding is important, even after the apocalypse.

And Max himself. Much has been made of the this film’s refusal to place itself in any sort of series continuity, and that is awesome. Fuck continuity. Fuck canon and fanboys and wikipedia listings of insipid details that all, together, are the enemy of unfettered imagination. I do not care when this film takes place, or that Rockatansky’s V8 Interceptor was already destroyed in The Road Warrior and here gets destroyed again. 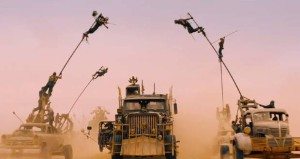 I do care, however, about who Max is as a character. Max lost his wife and child in Mad Max and set forth into the wasteland. He is not a hero with a debt of conscience to repay. He is not the fallen savior. He is a bastard who cares nothing for anyone any more. If the only way for him to survive is to save you, well then hurry the hell up and get saved so he can disappear. If there is nothing left for him to do but drive your damn truck then what difference does it make, even if it’s just a decoy full of sand, get out of the way and let him go. 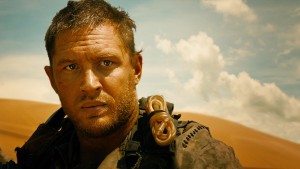 Here, Max is tormented by visions of the children whom he failed to save, as if he’s Oscar Schindler swilling high-octane petrol instead of mouthwash. It’s wrong, it’s lame, it’s not Max. Tom Hardy starts the film as Max Rockatansky, eating two-headed lizards and running for his life, but by the end he’s someone else, a soulful Max who whispers his truth to a failing Furiosa. He’ll save these women—who hardly need him, and no complaints from me on that score—not so he can survive, or as part of a hard-nosed deal, but because that’s who Max is in Fury Road.

In the end, yes, Max walks. But he walks as if he’s Faceman at the end of an A-Team episode, having done his duty to good and true, having saved the girls and declined the reward.

It is war boy Nux (Nicholas Hoult) who ends the film as Max ought to, torquing the wheel of the War Rig just before the arch, flipping it to ruin and burying its tons of metal death against the stone so the pursuers must trip over his corpse. He’s got nothing to prove and nothing to gain and nothing to lose because the world is over. Not just for Max but for all of us, only Max realized it first.

Or the Max I’d recognize did.

Tom Hardy isn’t great as Max, even though he’s a far superior actor to Mel Gibson. He spends the film seeming put out, not broken and running on fumes and fuming as Max should. His anger is replaced with wistful regret and it makes me want to hurl. Max? Guilty? In it for the redemption?

What in god’s name was Miller thinking?

Luckily, Charlize Theron is aces as Furiosa. As far as I’m concerned they should have just named her character Max and let Hardy have a free ride somewhere else. Screw continuity, right? Let Max be female, or let Max be dead and Furiosa be someone else, someone new and unknown in this wasteland, the daughter of a gyro pilot who once knew Max—that bastard who saved us all because he had nothing else he could possibly do. Just don’t make Max into the mysterious angel who’d leave a bevy of fertile, white-chiffoned hotties in a lush paradise because his work here is done.

Have I been ranting? It happens.

Even when I’m writing about films I liked.

Mad Max: Fury Road was undeniably an incredible piece of cinema. Its production design, costume design, editing, cinematography, and directorial vision all require our obeisance and praise. If you are a fan of action then there is none higher, at least in cinemas this century.

It is required watching for those who like to watch things go boom.

It also isn’t the film I’d hoped—one that flipped CGI the bird and then bit its own extended finger off, just to prove how hard it is—but I’m eager to watch it again. I’m eager to let its more-so be what it’s going to be, in its F5 tornado dust storm mayhem and rotting body wretchedness. I’m eager to let go of my need for these lovely girls to somehow make sense in a world without toothpaste and bikini waxers. I’m eager to pedal down on adrenaline and leave the rest behind.

I’m in for more Mad Max: Fury Road. And I’d love to see an edit of this film stripped of the computer graphics. I bet it’s even better.

*If this resonates with you, read this excellent article by David Christopher Bell.