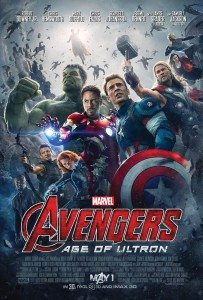 There is no shawarma scene in Avengers: Age of Ultron. Otherwise, it’s pretty much the same as the first Avengers movie. Then again, there’s also no Tom Hiddleston, sad to say. James Spader plays the evil Ultron, but only his voice. His body is a CGI robotman. Or rather, many CGI robotmen. Ultron’s all up in the internet, you see, and is able do download himself into however many smaller robotmen he likes. How many robotmen does he build? A lot. I mean really a lot. Enough to keep at least three massive action sequences alive. Do you like watching superheroes blow up/decapitate/slice in half/dismember and otherwise kill robotmen? You are going to love the fuck out of Age of Ultron.

Didn’t Iron Man 3’s finale consists of lots of flying robotmen? I’m really beginning to lose track of these movies. They have a way of blending into one big, long, difficult to recall stream of CGI blobs fighting other CGI blobs. Which is all a part of Marvel’s plan, to build a universe with neither beginning nor end. Once they’ve sucked us in, they create the impression that they’re telling discrete stories, when in fact we’re only seeing pieces of a larger story never meant to reach a conclusion. Here, have some more popcorn…

Iron Man, you screwball, you!

To give Joss Whedon, writer/director of Age of Ultron, his due credit, he’s a lot better at this than anyone else making Marvel movies. Age of Ultron makes Guardians of The Galaxy look like a high school video class production. That Whedon is able to juggle so many characters in a single movie, and to give each of them at least one moment not only to shine, but to project some measure of actual human depth, while all around them angry robotmen shoot laser beams at their heads, is quite an achievement.

Like his first Avengers movie, Whedon seems to enjoy best the casual scenes of superheroes lounging around, shooting the shit. Age of Ultron’s loosest, most comfortable scene is early on at a party celebrating the acquisition of Loki’s spear and magic helmet. Or no, forget the helmet. His magic spear, in which is lodged a gem housing an Infinity Stone, which if you’re not familiar with Infinity Stones, you’re probably not actually reading this review in the first place. They’re serious business, those stones, and having wrested one away from evil Hydra agents, the Avengers want to get festive. 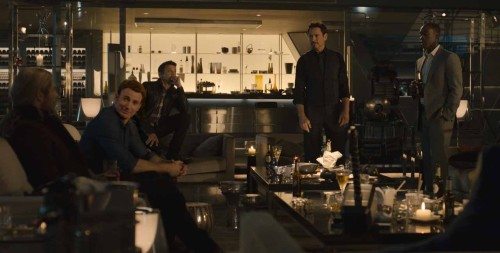 Party time for the fellas

So the party scene is the most fun scene, and Don Cheadle is the best part of it, playing a kind of sad-sack, second fiddle superhero I’d know about if I knew jack about Marvel comics, which I don’t. I’m pretty sure I saw him once in an Iron Man movie, but don’t quote me on that. I was a younger man in those days.

Hiddleston is missed because his Loki is the kind of evildoer worth fighting. Ultron is kind of meh as a supervillian. You see, Tony Stark (Robert Downey Jr.) has this robot, Ultron, he’s been building, and when he realizes Loki’s captured gem/Infinity Stone is actually a superduper brainthing, says hey, why not use this to give artificial intelligence to my Earth-protecting robotman? Bruce Banner (Mark Ruffalo) meekly agrees to help out, and hey presto! Ultron is born. 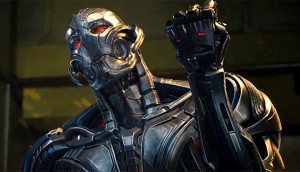 And, upon birth, instantly concludes that the best way to bring about world peace is to destroy all humans. So nice work there, Iron Man. This whole movie is about cleaning up your hubristic mess.

All well and good in terms of story stemming from character, yes, but again, a bit limp in terms of bad-guy bad-assery.

Ultron’s plan to destroy all humans is a bit dodgy, too. He builds this device that lifts into the air a massive chunk of earth and the small eastern European city atop it, with the intention of dropping it. And like a comet hitting the Earth, this will kill everyone, claims Ultron. Is he right? Comets are moving rather swiftly, as I understand them. Granted, dropping a mountain-sized piece of real estate from 20,000 feet up will get it moving pretty quick, but enough to vaporize all life? I remain dubious.

The Avengers, in order to stop Ultron, must kill more robotmen than you can shake a stick at, I don’t care how polished your stick-shaking skills are. Plus there’s all of these damn humans who didn’t escape the now-rising city who need rescuing. 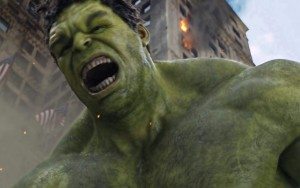 Hulk, who is actually pretty likeable when he’s angry

Helping our heroes, as if we didn’t already have enough characters in here, are two new superheros types, initially evil ones, The Wonder Twins and their pet monkey—hold on, sorry, the Maximoff twins, Pietro, AKA Quicksilver (Aaron-Taylor Johnson), who runs really fast, and Wanda, AKA Scarlet Witch (Elizabeth Olsen), who does all sorts of neat tricks. At first she gets inside people’s heads and gives them debilitating hallucinations of their worst fears, but soon she’s blowing shit up by thinking hard and squinting.

The other best scenes in the movie are when Scarlet Witch puts the zap on the brains of most of the Avengers, sending each into a personal fantasyland of terror. It’s an effective visual way to get at inner drives and fears, most of all for Black Widow (Scarlett Johansson), who did not have a model childhood. 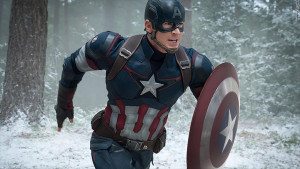 Thor’s personal hellvision is pretty far-out and creepy at first, but later on he insists there was an important message in it, so he enlists Dr. Selvig (Stellan Skarsgard) to take him to a magic mountain hot springs in which, assuming he isn’t killed by it, he may revisit this nightmare dreamscape and learn the secret of, um…

Jesus, what? None of this makes a lick of sense. I mean maybe if you’ve read the required ten thousand comics it does, but in the movie, no.

So anyway, Thor (Chris Hemsworth) turns up late in the game to say his dream told him to let Stark go ahead with his late in the game plan of giving artificial intelligence to yet another sort of robotman, who becomes this eerie computer/human/spacegod hybrid named The Vision (Paul Bettany). 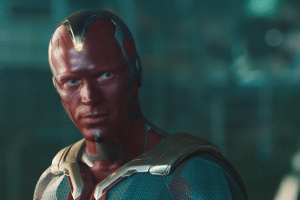 Take a look at The Vision

The Vision is on the side of good, though he doesn’t get nearly enough to do. I liked him more than anyone else in the movie. This is the kind of character, and actor, you want playing a bad guy. He’s very still and quiet, yet exudes an eerie power. When will superhero movies learn? It’s the quiet ones who are scariest. Loudmouth, hot-tempered robotmen, less so.

If The Vision had suddenly turned evil, he would have been by far the scariest dude in the movie.

Instead we get a mid-credits teaser of the baddest of bad guys, Thanos (Josh Brolin), who’s another big blustery type. What these movies need is a Michael Corleone type to face off against. Now that would be scary.

Did I just spoil the teaser? Sorry. Let me make it up to you with this bit of intel: there is no end credits teaser. Thanos is it. And is he eating shawarma? Alas, he is not.

Going back to Scarlet Witch zapping the brains of the Avengers, she zaps the Hulk too, leading to his big fight with Iron Man, but unlike Thor and Black Widow and Captain America (Chris Evans), we don’t get to see Hulk’s hallucinated vision, which seems a huge (ha ha) missed opportunity.

For most of its one-minute-shorter-then-the-first-Avengers running time, Age of Ultron moves along well enough. Some of the talky scenes go on too long, and some of the battles, especially the finale, go on much, much too long, as if we’d go away angry if the CGI spectacle failed not only to impress us, but to numb us, bore us, and, finally, bludgeon us into a state of wide-eyed, drooling catatonia.

The movie has neither beginning nor ending. It begins mid-action sequence, and in the end kind of peters out with a few brief “character development” scenes, in which the team seems to be breaking up with a series of shrugs. Like I said at the top: the movies aren’t made to tell discrete stories; they’re pieces of a larger one designed never to stop.

Nevertheless, Joss Whedon will be sorely missed when the next installment, both halves of it, arrives in 2018 and 2019. It’s no easy task juggling so many characters and so many story-lines, and fitting everything into the larger, ever-changing multi-movie universe of Marvel. Whedon does it better than the rest. Most Marvel movies may be reviewed with this simple template. Age of Ultron is a different kettle of robotfish.

I just wish it had more shawarma.

One response on “Avengers: Age of Ultron, In Which No Shawarma Is Eaten”