Writer/director Fernando Coimbra’s A Wolf At The Door (O Lobo Atrás da Porta), a Brazilian film first shown in 2013 but only now being released in the U.S., begins as a more raw and realistic Fatal Attraction, the ’87 flick in which Glenn Close goes bonkers after one magical night with married man Michael Douglas, but ends with its heroine/antagonist (depending on your point of view) taking things to a very extreme conclusion. Actually, scratch the “heroine/antagonist” angle. There are no heroes or bad guys in here. Everyone is tainted. 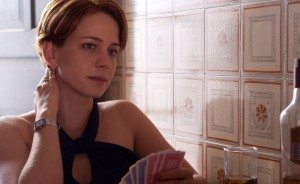 Leandra Leal plays Rosa, the woman with whom married man Bernardo (Milhem Cortaz) begins an affair one day after meeting at the local train station. It’s no one night stand these two have; their affair lasts a year before going off the rails. How far off? The movie opens with Bernardo’s wife, Sylvia (Fabiula Nascimento), picking up their six-year-old daughter from school—or trying to. The teacher is confused, says Sylvia called and said their neighbor, Sheila, was picking up the kid, and did so. Uh oh. Bernardo and Sylvia have no neighbor named Sheila.

And yet, the teacher tells the investigating cop, the kid ran into this woman’s arms; she was known to her. Bernardo’s affair soon comes out to the cops. They pick up Rosa, who denies everything, but soon admits to having taken the little girl, but only at the behest of another woman. Rosa has no idea what this woman did with the kid.

At first, A Wolf At The Door seems to be going down the Rashomon road, with flashbacks conforming to the viewpoints (or lies) of whoever’s remembering them, yet after only a few such flashbacks, Rosa tells the cops she’ll explain how it all went down for real. The rest of the movie plays out as her story. We never return to the cops and the investigation, which structually is a bit wonky, but not so much it’s distracting.

The movie belongs to Leal as Rosa. Her change from cute and seductive to lovelorn to manipulative to vindictive is subtle and believeable. Bernardo as a character is less interesting. He’s just a guy with a big ego who sees nothing wrong with getting a little something on the side. Though by the end, his soul takes a turn for the dark.

The first two thirds of A Wolf At The Door, detailing the illicit affair and its slow change into something less than fun, is just interesting enough. It drags a little, and might have been helped by having the police investigation breaking it up. But once into the third act, things pick up in a big way. Unlike Michael Douglas in Fatal Attraction, whose only crime is to have a one night stand with a crazy woman, Bernardo becomes a more, shall we say, pro-active heel, a criminal, even, in a scene I won’t even allude to lest I spoil one of the two most disturbing moments in the movie. The most disturbing moment comes at the end.

A Wolf At The Door, then, is less about karmic retribution for committing a moral sin, and more about how one bad decision—engaging in an affair—can unearth an inner darkness that if not stopped will spiral out of control. Maybe, the movie suggests, it can’t be stopped, not until reaching its necessary conclusion.

For you Bay Area folks, A Wolf At The Door opens today at The Roxie in San Francisco and the Christopher B. Smith Rafael Film Center in San Rafael. 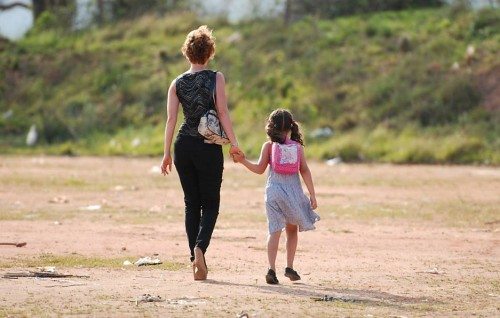