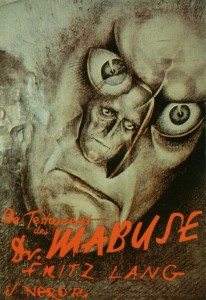 And all this in 1933, thanks to the vision of Fritz Lang.

Yes, The Testament of Dr. Mabuse is in black & white, and in German, too. Sure, it is the sequel to a four-hour film, also about Mabuse, a character who sprang from the pages of pulp fiction. And, indeed, the verisimilitude of its special effects may pale against those of Jurassic World, but that’s only if you compare them without emotion. As examples of film making prowess, of dramatic command, Dr. Mabuse wins.

Dr. Mabuse will fell your giant, bio-engineered dinosaur with half a crazed cackle. He and his dastardly minions will smite your cities unto dust. They will travel through time to skull fuck you and then chortle contentedly as chaos consumes us all. 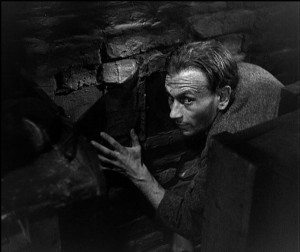 If you thought Heath Ledger’s Joker was an agent of nihilistic madness then come meet that yegg’s great grandpappy — who’ll school him. Dr. Mabuse has already won because Dr. Mabuse can’t lose.

From its first frames, The Testament of Dr. Mabuse makes it clear that it’s not going to screw around. Disgraced detective Hofmeister (Karl Meixner) hides out in a cacophonous storeroom, seeking evidence and barely clinging to his sanity. Before he can report back, he is attacked with bullets, with barrels full of explosives, and with all the evil the dark conceals.

He, and perhaps you, go mad. That is the intro to The Testament of Dr. Mabuse, a film that puts the effects-heavy, international-box-office focused modern monstrosities to shame. 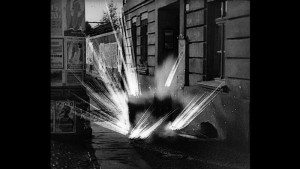 Fritz Lang knows what he’s doing and what he’s doing is making a blockbuster before there was such a thing. What he’s doing, concurrently, is pissing of Josef Goebbels — yes, everyone’s favorite Nazi propagandist — and tearing your shithouse down.

In sequences that have been ripped off, remade, and rebooted for almost a century, Lang and his co-screenwriter/wife Thea von Harbou lay out a complex web, so try to keep up. The head of the local asylum, Professor Baum (Oscar Beregi, Sr.), fills us and his students in on who this Mabuse character is — or was — in case you missed both parts of Dr. Mabuse the Gambler. A brilliant logician capable of flawless planning, Dr. Mabuse hatched evil plots that would make Drs. Doom, No, and Fu Manchu feel feckless and inferior. When finally cornered at the end of The Gambler, this mad, hypnotic genius confronted the ghosts of all those he did in and slipped into catatonic insanity. Now he sits mute in Professor Baum’s asylum, scribbling nonsense on loose paper. 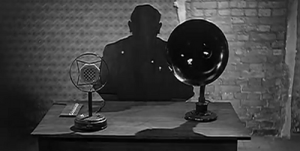 The man behind the curtain?

But something diabolical is brewing and it’s got Dr. Mabuse’s signature affixed.

Inspector Karl Lohmann (Otto Wernicke) jumps on the case, just the man to stop the unstoppable. He follows the leads left dangling by Hoffmeister’s psychotic break. As the audience, we watch Lohmann stalk a criminal gang led by an unseen leader. We watch these gangsters struggle with violence and love. We witness otherworldly possessions and encroaching insanity and hunger — ravenous hunger — to watch the world burn.

Lang’s punches land time and again in Testament. He combines action and suspense and romance and horror with the skill of a saucier. I lost count of the times his shots, his set ups, and his surprises stole the thunder from films as varied as A Clockwork Orange, The Drowning Pool, and The Dark Knight. Everyone, knowingly or not, has ripped off The Testament of Dr. Mabuse. What is now a cliché or a genre trope first found its footing in the films of Fritz Lang.

Come to bask in Lang’s command of camera and light. Watch the mastermind behind Metropolis and M and The Big Heat drop blocks of excitement and tension and mystery like a Jenga master. Boggle at how a little make-up and some century old effects can create more wonderment than all the computers in Northern California. 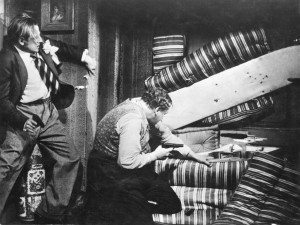 And enjoy Lang’s (and novelist Norbert Jacques’) nose thumbing at the Nazis, who were just then climbing to power. Goebbels banned the film, fearing it would inform audiences of the illusory power of the government — power that could be undone by violence. It was partly because of this censorship that Fritz Lang left Germany and ended up in America. 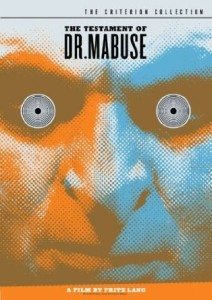 The Testament of Dr. Mabuse is the second film in a trilogy. The first, Mabuse the Gambler (1922), was split into two parts (and is streaming on Netflix). The third, The Thousand Eyes of Dr. Mabuse, wasn’t released until 1960. It was the last film Lang directed.

Remade once (in 1962) and inspiring countless others — including, without question, The Dark Knight — Dr. Mabuse lives on. He is a character that cannot, should not, die. He is the Dread Pirate Roberts of devilish deeds. His will commands you. You cannot resist.

You must watch The Testament of Dr. Mabuse. Available from the Critereon Collection.

6 responses on “The Testament of Dr. Mabuse Is Going to Travel Through Time to Skull F*** You”