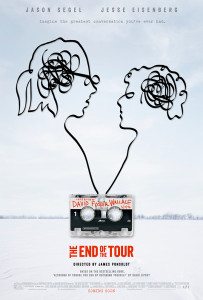 Am I a heathen for finding The End of The Tour kind of boring? Based on journalist David Lipsky’s book-length account of his time spent with David Foster Wallace at the end of his Infinite Jest book tour, Although of Course You End Up Becoming Yourself, the movie is a conversation between two writers, one the newly anointed heir to Salinger and Pynchon, the other a struggling journalist at Rolling Stone.

Their conversations circle primarily around fame. How to deal with it, how it affects one’s work and one’s life, whether it should be desired or shunned, and so on. It is at times insightful, at times meandering, and never especially dramatic.

Jason Segel does his best to embody Wallace. It’s a good performance, but I couldn’t help seeing it as performance. I never forgot I was watching an actor. Jesse Eisenberg more completely vanishes into his role as Lipsky, portrayed as an insecure, selfish, star-struck wanna-be. I don’t know what kind of man Lipsky is in real life, but he’s a pathetic mess in this movie. Maybe his whining self-importance was invented to create the only drama in the movie? It strikes me as unlikely it appeared in his book, which I haven’t read. 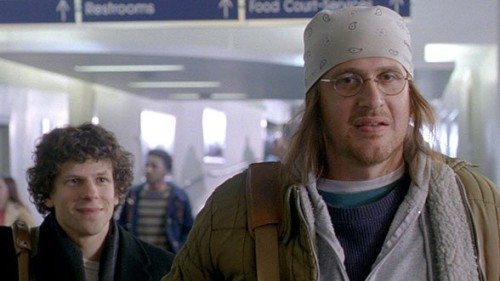 The hanger-on and the star

I have read Infinite Jest, and most of Wallace’s other work, and I can’t say I saw much of what makes his writing so powerful in this movie. I’m not sure what audience it was made for. Anyone familiar with Wallace’s work would have to find it lacking any real depth or revelation of character. And I can’t imagine anyone unfamiliar with his work rushing off to the bookstore after watching this.

As directed by James Ponsoldt and written by playwright Donald Margulies, The End of The Tour is a smooth piece of work. Maybe too smooth. One could say it putters along as in a play, but one without much in the way of drama. The forced tension toward the end feels false. It’s not enough to turn this movie-length conversation into anything like the satisfying character study it wishes it were.