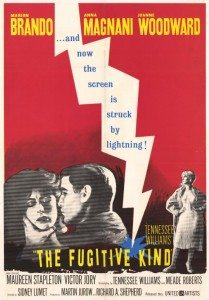 Marlon Brando was a handsome man. He smoldered like no one alive. It’s no wonder he was the star he was. Was there ever a tougher guy with a softer heart? In Sidney Lumet’s 1960 The Fugitive Kind, Brando is so soft-spoken and soulful you fear he’s going to fall asleep mid-sentence every time he opens his mouth. The opening scene is Brando in a courthouse, standing before an unseen judge, explaining how he came to be arrested, and why it won’t ever happen again, in the broken, half-muttered sentences of a sleepwalker. The camera never leaves his face. It’s an absolutely gripping scene. Brando’s name in the movie? Valentine “Snakeskin” Xavier. So nicknamed owing to the snakeskin jacket he’s never without. If you’re looking for a snakeskin jacket double-bill, follow this up with Lynch’s Wild At Heart.

Tennesse Williams wrote the screenplay with Meade Roberts, based on Williams’s play Orpheus Descending, which hadn’t fared well on stage. In an era where everything Williams wrote was a hit, Orpheus was a rare bomb. Maybe it was this failure that inspired Williams to try another version of his story, this time for the movies, and starring the actors Williams had originally envisioned for the stage production, Brando and Italian star Anna Magnani. 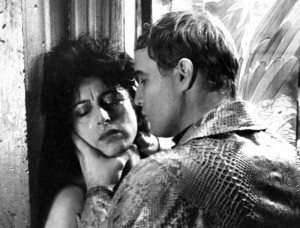 A match made in heaven

The production was a big deal. Brando was paid a million dollars to star. Sidney Lumet, a theater director turned TV director turned movie director whose first movie, 12 Angry Men, earned him an Oscar nomination, was hot, and already becoming known as the go-to director for adapting stageplays to the screen. And Williams was Williams, despite the flop. People were paying attention to this one.

They stopped paying attention once it opened. The Fugitive Kind, like its source material, bombed. Too slow, too boring, too stagey, too mannered. Since then, its star has risen, at least in terms of critical respect. I doubt it’s high on the most-rented-movies list, but it’s beloved enough to have been put out on DVD by Criterion.

I kind of rather liked it, mostly. A ringing endorsement, to be sure. Brando is just…Brando. You can’t take your eyes off him. He’s like this massive rock edifice, yet so damaged you just want to give the poor fella a hug. Lumet shoots him in close-up often, same with co-star Magnani, the older woman who falls for Brando’s drifter. 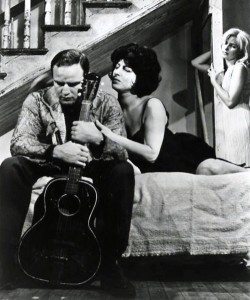 The set-up is that Val is leaving his old life in New Orleans behind, which life is never stated explicitly, but seems to involve his “performing” at special sorts of parties, and not just with his guitar. He winds up in a little town, is taken in by a nice religious lady (a young and adorable Maureen Stapleton), and given a job at the local general store, run by Lady Torrance (Magnani). Her husband, Jabe (Victor Jory), owns the store, but he’s just returned from the hospital, and lies bedridden upstairs with a mysterious malady. He’s a mean, sweaty, jealous bastard. Lady hates him and wishes he’d just up and die already.

Also on hand is town strumpet Carol Cutrere, played with exsessive abandon by Joanne Woodward. She cavorts drunkenly and loudly anytime the movie slows down. Which is most of the time. This is one glacially paced movie, full of long, simmering stares, and melodramatic speeches.

Lumet is known for his lack of artiness and pretension. He tends to go for realism. With The Fugitive Kind, he adds a little something extra in the lighting, giving the movie a theatrical flair. In some scenes, during speeches, the lights will noticibly dim. Other scenes feature bright lights from off-screen casting wild shadows. It’s all a bit odd.

As with any melodramatic southern play/movie, this one ends with a fire and everything going to hell, but not before the past is unearthed and at least one person turns up pregnant.

The Fugitive Kind is far from Lumet’s best movie (for my money, you can’t beat Dog Day Afternoon and Network), but it’s undeniably powerful. It just takes its sweet time getting there. If you’re in the mood for a theatrical, slow-burning melodrama, this’ll do just fine. If nothing else, you get to marvel at Marlon Brando for two hours. 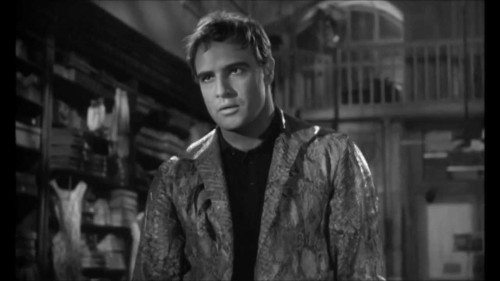