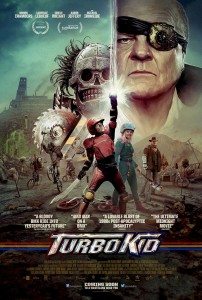 Remember when Peter Jackson made low-budget, gore-splattered horror comedies instead of 12-hour epics about misunderstood elves? Well, me neither, really — it’s been so long since I’ve seen Dead Alive that all I recall about that film is a particularly nasty sequence with a lawn mower. But I recalled that sequence, numerous times, with immense pleasure, while watching the triumphantly goofball, ecstatically retro, blood drenched celebration that is Turbo Kid.

What is Turbo Kid, you warily enquire? Well, imagine a cross between The Last Starfighter and The Road Warrior with a little Death Race 2000 and Cherry 2000 whipped in, then add a splash of whatever the hell Bob & Doug McKenzie were filming at the beginning of Strange Brew and yeah, that about covers it. Plus, I guess you better make it Canadian and have everyone riding BMX bicycles.

Did you see that Kung Fury short that was going around a couple of months ago? This is like that but not so aggressively ridiculous. Turbo Kid is a genuine, heartfelt run at making a 1980s-style post-apocalyptic flick, with the throwback styling making for good gravy, not serving as the entire meal. Unlike Kung Fury and other spoofs, Turbo Kid stands tall on its own two (mutated) legs. Unless someone is wearing those two legs as an unfortunate hat? Which, yes, happens once or twice.

In either case, Turbo Kid doesn’t waste its breath making fun of the kind of movies it’s trying to be; it simply is that kind of movie and, ergo, is both funnier and more satisfying and more glorious. Gloriously simple. Gloriously goofy. Gloriously right. 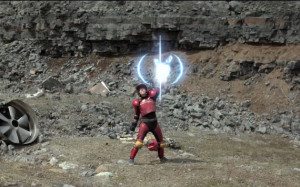 One might watch Turbo Kid and mock its bare bones plot, its exaggerated characters, or its clunky transitions. One would only do that, though, if they hadn’t grown up watching movies in the 1980s. Turbo Kid isn’t attempting to be Kramer vs. Kramer; it’s Dreamscape for a new era. It’s your new favorite midnight movie.

Munro Chambers plays The Kid, an orphan scrounging out a life in a water-starved wasteland. He gets befriended by the bubble-gum goofy Apple, played perfectly by Lawrence Leboeuf. She gets captured by Zeus — Michael Ironside, more or less phoning it in — who rules the area with his gang of BMX-riding warriors, including Skeleton (Edwin Wright), who’s armed with the sort of circular saw blade flinging contraption that Lord Humungus would slaver over. If you need any more plot description I sincerely question your deductive capabilities and/or your commitment to intoxicants.

Writer / directors François Simard, Anouk Whissell, and Yoann-Karl Whissell knock this one out of the park with their gnomestick, which is a stick with a garden gnome duct taped to it. Duh. It is exactly the right combination of soft in the head and lopped off at the neck. It’s got robots and poisonous green fog and arm wrestling to the death and pithy rejoinders, too. So throw another VHS tape on the fire, charge up your turbo power glove, and point your unicorn straight for your enemy’s heart. Turbo Kid is here. Thank god. 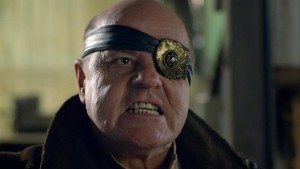 It is difficult to put one’s finger on why Turbo Kid feels so right. Yes, the production design team has done their job well, managing the trick of creating an original world that riffs off visions we well know — such as that of Army of Darkness and Mad Max. High praise also goes to whomever scouted locations (makers of teen dystopia trilogies take note). The story is slim and feels like it, but that level of objective distance keeps the comedy both played straight and close to the surface. If we really knew The Kid, or Frederic the Cowboy (Aaron Jeffries), would their antics still amuse? I think not. The film judges well our appetite for digital effects, too, using them sparingly to add juice to the hands-on muck. In this and in general, the cinematography finds strong footing.

The soundtrack made me feel 12 in the best possible way.

Turbo Kid may not be flawless, or brilliant. It’s just joyous. It allows itself to be as corny as the world was before superheroes became big business and dark and gritty began to pass for entertainment. It’s a film from a simpler time. It’s an honest-to-god movie. And it delivers, not ironically and not with condescension, but with real affection.

I hope Turbo Kid likes me back. If you’ll excuse me, I’m going to call and see if it wants to come over after school today to play. Maybe we’ll run around in the woods and pretend we’re space ninjas? 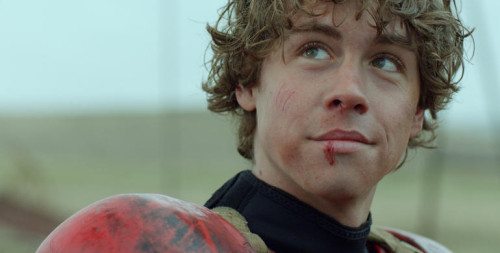 Turbo Kid is available for streaming online via Google Play, Amazon Prime, and VUDU, and is also playing in selected theaters. I highly recommend seeing it with a crowd if you can, such as at Oakland’s New Parkway tomorrow night.

5 responses on “I Turbo Kid You Not”