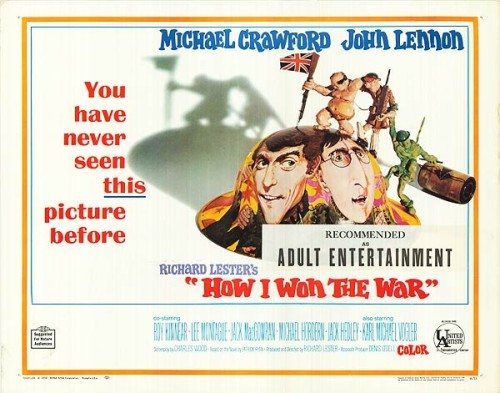 I’ve been on a Richard Lester kick over the past year, having read Steven Soderbergh’s book-length interview with him and watched A Hard Day’s Night (’64), The Knack…And How To Get It (’65), Petulia (’68), The Bed-Sitting Room (’69), and now, what’s usually billed as his biggest misstep of the era, How I Won The War (’67), which I was lucky enough to see in a theater on 35mm.

So I’m sad to report that its being on 35mm was the best thing about it. How I Won The War is one weird, squirrelly mess of a movie. It’s allegedly a comedy, but good luck finding anything to laugh at. There’s some wit on display, of the kind that makes you think, “Ah, very clever, that,” but no laughs.

John Lennon co-stars, and because he’s John Lennon his name and image have been used to sell the movie since before it began shooting. This photo of him in his WWII finery was reprinted everywhere, even on the cover of the first issues of Rolling Stone magazine: 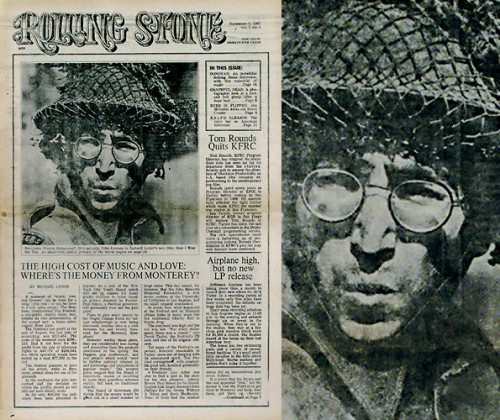 It’s impossible to say whether or not Lennon is a good actor, he has so little to do. To be fair, no one has anything to do in this movie such that you could rate their acting chops. Stylistically it’s all over the map. The story is told in sort-of flashback by an inept buffoon, Lieutenant Earnest Goodbody (Michael Crawford), a man with no idea how worthless he is, hated by all who serve under him, and ever full of good cheer and love of country and war. He tells his story while chatting with a German officer he’s been captured by. Turns out these two officers have much in common, certainly more than with any of the enlisted men serving under them. 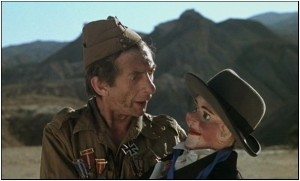 Goodbody’s men spend most of the movie in North Africa with the music from Lawrence of Arabia playing loudly over their endless scenes trudging around the desert. Reading up on the movie I’m told that a number of famous battles appear, but I swear I didn’t notice a single one. I mean I didn’t notice any battles, whether or not they were famous. Mostly I noticed a lot of characters jabbering away at one another incomprehensibly.

Lester uses a lot of jarring cutting throughout. Actual newsreel footage of WWII is intercut now and then. At one point the characters are revealed to be on a stage in front of an audience. Characters regularly break the fourth wall. Whenever a character dies, they return in later scenes painted entirely green or yellow or red—like toy soldiers—with a thin mesh over their heads. Because Goodbody’s men are like toys to him? And he’s just a kid? Sure. Let’s say that.

Goodbody and his men seem to have one goal: to create a cricket pitch behind enemy lines. Such wits, these English chaps. They get it going eventually. 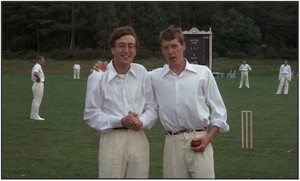 A wee chat about cricket

How I Won The War is written by Lester’s usual collaborater, Charles Wood, and very loosely adapted from the book of the same name by Patrick Ryan, which I’m going to assume is rather more sensible. Wood gets in plenty of ideas on the matter of the lunacy of war, but in no way fits them into character or story. It seems enough for him and Lester simply that the ideas are present. There’s no way to connect to any of the characters or to care about anything that happens to them.

With that said, not enjoying the movie, not connecting to the characters, not finding anything sensible to hold onto—this is all on purpose. Lester didn’t want to make a war movie that was fun and entertaining, no matter its point of view. He and Lennon at times referred to How I Won The War as an anti-anti-war movie. Probably just to confuse people, but their point was that there is nothing heroic about war, no way to play it as entertainment, that any war movie should be as impenetrably jarring, off-putting, and senseless as war itself. 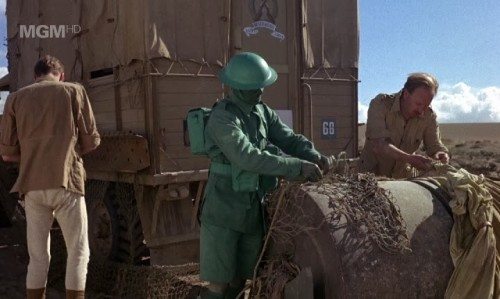 In theory, I appreciate the idea. But at least in this instance, the result is so garbled Lester fails to make his point. Lester famously carped that Kubrick’s Paths of Glory was merely a story of some incompetent generals, and that if Kirk Douglas had been leading the troops, they’d have killed more Germans. Which is such a bizarre reading of the film I’m not sure what to think. Kubrick’s satirical purpose is shouted out loud in the title alone. War is insanity in Paths of Glory; to be human is to disregard nationalities altogether.

How I Won The War winds up feeling less like an anti-war movie and more like an anti-movie movie. In that, Lester succeeds. No one’s going to find his version of war entertaining. Very clever, that.