There’s something of a minimalist movement in low-budget genre films of late. They are usually quick and dirty and violent, often well made, but not often adding up to anything more than nice filmmaking. Watching Cop Car, a new movie directed by John Watts (who because of it has been hired to direct the upcoming Spider Man reboot (may god have mercy on our souls)), I was reminded of last year’s Blue Ruin and Cheap Thrills, two violent, bloody movies about little more than being violent, bloody movies. Cheap Thrills was pretty fun. Blue Ruin was less so. 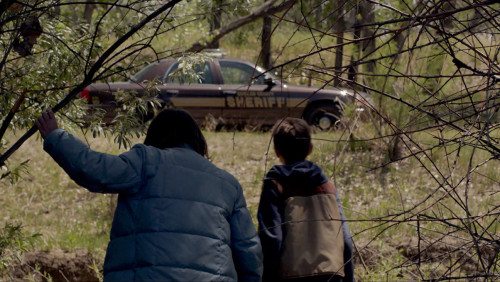 Cop Car puts the minimalism back in minimalism. So little happens I was impressed they got 85 interesting minutes out of it. Too bad they didn’t put anything else into it. “Interesting” is certainly something—plenty of movies lack it entirely—but one hopes for a wee bit more, doesn’t one?

It begins with great promise. Two ten year old boys, Travis and Harrison, walk across a wide-open midwest-looking field reciting swear words. They come upon an abandoned sheriff’s cruiser amid a stand of trees. They dare each other to touch it. They find a door open. They play around inside. They find the keys. They don’t know how to drive, but they start it up, figure out which pedal makes it go, and tear ass across the fields, siren blaring. 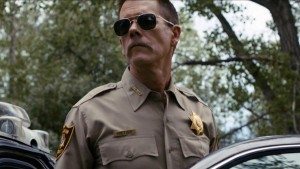 Back in time we go to Sheriff Kretzer (a skinny, mustachioed Kevin Bacon) parking his car in the trees and hauling a dead body out of the trunk. Another body is still in there. Dead? Alive? Your guess is correct. After burying the dead body, he returns to his—uh oh.

It feels like a set-up ripe with possibilities, but screenwriters Watts and Christopher Ford don’t come up with much. The kids drive around some more. They wave around the guns they find in the back seat. They open the trunk and make a new friend. They’re discovered by Kretzer. There’s a shoot-out. Moments feel comic, but on the whole it’s a grim affair, with a non-ending ending that feels like a cop out. Ahem. It feels like the kind of ending one employs when a themeless movie has to be wound up somehow. With no meaning attached to anything, how do you know how to conclude it? You don’t. 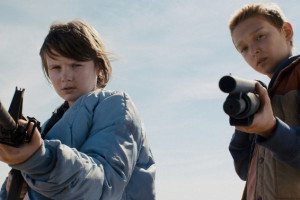 I’m no fan of excessive backstory, but the movie needs something going on characterwise. We learn nothing about anyone. The kids are running away from home, or at any rate in the way bored ten year olds do, where by day’s end they turn around. Sheriff Kretzer is clearly a bad guy, but remains opaque. The guy in the trunk is another bad guy. He’s pretty angry. And that’s that.

Cop Car is well made. It’s taut. You want to find out what happens next. But nothing happens next. A little more inventiveness would have gone a long way. If you’re going to sideline the kids for the finale (bad call), you’d better come up with a finale bigger than two mean guys shooting guns at one another on an empty road. At least throw in a surprise. Better yet, be generous. Throw in two.

One response on “Cop Car, or: What Not To Steal”