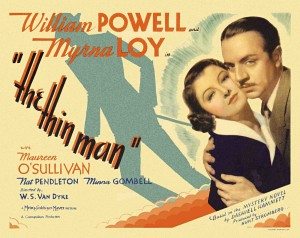 Between 1934 and 1947, William Powell and Myrna Loy starred in six Thin Man films and you should definitely watch three of them — for two are among the best drunken detective larks one could possibly imagine and a third is close enough. The remaining three films also have quantifiable value; they help us set our expectations for the upcoming spate of Star Wars films, illustrating how reviving the same concepts with the same cast provides zero guarantee of quality.

If you’re a Thin Man neophyte, the facts of the case are plain enough. William Powell and Myrna Loy — their generation’s Brangelina — made fourteen films together (including these six). They play insouciant, intoxicated sleuths Nick and Nora Charles accompanied by their wire fox terrier, Asta, and in later films, their son Nicky Jr (Dean Stockwell; not kidding). The first film, The Thin Man, briefly introduces Nick as a retired rogue of a detective who’s somehow landed the affable, affluent Nora. Nora’s family fortune allows Nick to leave mysteries behind in favor of martinis. 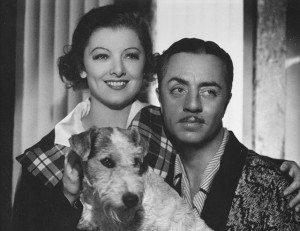 Or that’s the case, save for this last mystery (or six), in which the couple becomes personally involved in a diabolically complicated murder.

The first film, The Thin Man, comes from Dashiell Hammett’s book of the same name. It’s a loose-limbed adaptation that favors witty banter over fidelity — banter it’s said to be modeled on Hammett’s own exchanges with his wife Lillian Hellman. Other Thin Man films lift their plots from other Hammett stories, such the Another Thin Man, which covers the ground of “The Farewell Murder”.

That’s it. No origin stories. No deviations from formula. No reboots, remakes, or retreads — just Nick and Nora solving mysteries while imbibing heartily.

So which three should you see? Capsule reviews reveal all:

Directed by Woodbridge Strong (W.D.) Van Dyke and written by husband and wife team Albert Hackett and Frances Goodrich, The Thin Man is a bona fide entertainment classic, like someone took The Maltese Falcon and marinated it in vermouth. Powell and Loy scintillate under Van Dyke’s one-and-done directing style, taking full advantage of their natural rapport and his improvisational instincts.

The premise has Nick and Nora visiting New York for Christmas when a scientist Nick knows goes missing. As is the reliable pattern for the The Thin Man series, Nora talks Nick into taking the case and then insists on tagging along, despite the danger. Nick, for his part, drinks as much as possible before corralling the myriad suspects into one packed room to see who cracks.

Interestingly, The Thin Man is named not for Nick or Nora, but for the slender missing scientist. This makes the title an awkward hook on which to hang the series, but they stuck with it anyway.

Watching The Thin Man may be one of the most enjoyable experiences of your life. It is a cocktail party with the friends you wish you had. It is that last sip of booze before the one that makes you wish you’d called it a night. If you watch only one of these films, this is it.

After the Thin Man

The second installment in The Thin Man series may actually be on par with or better than the first. Remember this the next time someone challenges you to name a sequel that’s equal to the original and you’re too slow to mention The Godfather Part II or The Empire Strikes Back or The Road Warrior or From Russia with Love or whatever they’re going to call the new Blade Runner…

There is no Thin Man in this film, but note how the title cleverly avoids that trap. What we get instead is more sparkling Nick & Nora repartee, more adorable Asta, and a young Jimmy Stewart. Stewart brings his usual level of charm but he gets outplayed by both Powell and Loy, and only part of that is size of his role.

In and out of San Francisco’s Chinatown, amid the alcohol, and before the traditional congregation of the suspects, our sauced sleuths investigate a suspicious death that involves Nora’s family. Unlike a later installment in this series, this one gets our heroes’ home life most assuredly on the money. Nora’s family is a cast of the type of crazies that still make San Francisco sing.

Naturally, they hate Nick — and need his help. 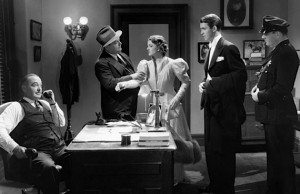 After the Thin Man comes from the same creative team who made the first film — Van Dyke, Hackett, and Goodrich — and is again based on the work of Dashiell Hammett, who wrote an original story specially for this sequel. It makes the most of its San Francisco setting and ups the ante with a denser parade of possible suspects.

It’s a stone-cold whodunnit on the rocks. The only thing not to love about it is the subplot about Asta’s romantic difficulties, which has aged not so gracefully.

Alas, this third outing is where the series goes astray. It’s hard to say why, as it’s the same cast and crew and the source material is again straight from Hammett — but astray we go. The tale, which involves Nick and Nora’s crotchety old business manager, doesn’t ever really gel. This is because there’s little to invest in. The victim isn’t missed, the suspects are mostly creepy and of questionable motivation, and Nick and Nora seem put upon instead of enthralled. The New York setting is incidental and utterly wasted.

While the mystery itself is classic Hammett, its resolution strains one’s belief. It’s a murder-mystery sort of murder instead of one we can imagine someone actually plotting and enacting. Subplots about Nick’s wilder days and the introduction of Nicky Jr. as an infant fail to take flight.

Shadow of the Thin Man

Shadow brings back the Thin Man magic and this is the last I’d heartily recommend watching. Set in San Francisco — with scenes on the newly completed Bay Bridge, where Nick gets pulled over by the cops — Nick and Nora find themselves hooked on the mystery of a murdered jockey amid a slew of associated mobsters. It remedies the flaws of Another Thin Man by making the complications of the plot stem neatly from its unreliable characters. These yeggs do inscrutable things because they’re human, not because their schemes are dastardly. Much of the picture’s cleverness rests on Nick’s capable shoulders. Nora also gets moments to shine, but she’s never the one to outsmart the villain.

Which may have been fine in 1941, just a few weeks before America entered the war, but today we can lament the relegation of Myrna Loy’s Nora to the role of feisty assistant. If they ever make more Thin Man films — and I hope they do; 70 years is too long to go without more Nick and Nora — I equally hope they genderswap the leads, so Nora’s the retired detective and Nick’s the rich society fellah. I’m actually shocked Brad Pitt and Angelina Jolie haven’t made twelve of these already; they’re perfect for the parts.

Shadow of the Thin Man was helmed by W.S. Van Dyke — his last before his death in 1943 — but it brings on a new group of screenwriters. It’s also the last produced by Hunt Stromberg, who has the best real name I didn’t make up.

The best fake name I didn’t make up is Babalugats.

With the series’ fifth film, The Thin Man Goes Home, you can feel the franchise lose its luster. New director, new writers, and a questionable deviation from Hammett’s source material has Nick returning to the small town of his birth, where he’s set up to try and impress his judgmental father. How? By solving a murder that happens literally upon his doorstep. 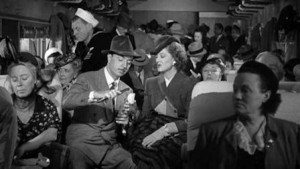 The case is goofy in a late-Hitchcock way instead of desperate as was more Hammett’s style. The idea of Nick coming from such a sedate home life is a real head-scratcher and his fame with the locals feels unpleasantly odd.

The Thin Man Goes Home is not a terrible film by any stretch; it’s just not particularly engaging or endearing. If you watched Another Thin Man, this one is about on par. Better than whatever you were about to stream off Netflix probably, but it’s no Blade Runnier.

Song of the Thin Man

Song of the Thin Man was the last of the series until they revived it in 2018 to compete with James Bond vs. Jason Bourne. The mystery revolves around a gunned-down bandleader and a mess of hep-cat jazz musicians you want to punch in the throat. It’s got an insanity sub-plot that’s straight out of a soap opera, a cavalcade of characters you can’t bother to keep straight, and provides little reason to care whether or not justice gets done.

It does feature child actor Dean Stockwell as Nicky Jr — and he looks creepily the same then as he does now. Also, it turns out Luke is Kylo Ren and Han Solo has a serious case of piles. When Chewbacca reveals that his fur is lightsaber-proof, he is named lead trumpet and everyone in the audience is forced to buy a commemorative 48-gallon sippy cup. Then Jason Bourne almost drowns (again) and is reborn as Jason Voorhees and I just blew your fucking mind.

But yeah. Go watch three The Thin Man movies and see if I’m not 100% correct about Chewbacca.