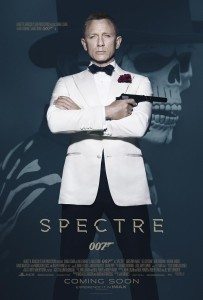 Poor James Bond. Sad and angry and angsty and still suffering the mental anguish of a less than ideal childhood. All he’s good at is killing people and he doesn’t even like killing people, or else he likes it a little but hates that he likes it at all. And now the good people at MI6 are being fired and replaced with a worldwide surveillance system! The one thing he’s good at, super-secret-agenting, is no longer in style. Sigh. What a sad, sad life. Poor James Bond.

Daniel Craig is back as the miserable killer for his fourth outing in Spectre, directed, as was Bond’s previous sad, boring, personal-demon-haunted adventure, Skyfall, by Sam Mendes, and written by almost every currently working Hollywood screenwriter. It’s better than Skyfall, but really, what isn’t? Why Skyfall was as praised as it was is mystifying. It was a terrible, terrible movie, in which Bond fails at everything he does, and that ends with the boring bad-guy, whose single plan is to kill M, killing M. Nice work, James. See what moping gets you? 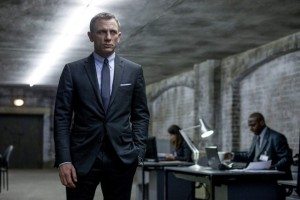 Yet most reviews are saying Spectre is worse. I’m not certain why, but I have a suspicion it’s because in many ways Spectre is a return to being a typical Bond movie. There’s a bad guy (Christoph Waltz) with a secret base in a crater who wants to take over the world, there’s a woman (Léa Seydoux) who falls for Bond, there’s car chases and shoot-outs and explosions and a fist-fight on a train, there’s even a gadget that saves Bond’s neck late in the movie. But for whatever reason, people don’t seem to want a regular Bond movie. Maybe they prefer desultory journeys into Bond’s tortured psyche?

Spectre offers up another helping of Bond’s boring personal history, but it doesn’t lay it on as thick as Skyfall. Waltz’s bad guy turns out to be both (SPOILER, maybe?) Blofeld and Bond’s childhood foster brother. Seems Blofeld didn’t like his pa taking in a new son, so he killed his pa, faked his own death, changed his name to Blofeld, and has been, we learn, personally responsible for everything awful that’s happened to Bond in the previous three movies. 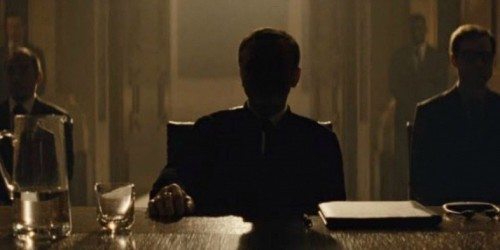 Which I know, that’s not laying it on thick, you ask? Compared to Skyfall it’s not. The way it’s played in Spectre, all of this malarkey comes off as standard bad guy speechifying pre-ill-reasoned, curiously slow method of murder. It’s the kind of badly written, senseless speech we expect a bad guy to give in a Bond movie. That it brings in a personal vendetta against Bond, well, so what? Bond doesn’t seem to care, why should we?

Craig is a master at playing Bond as a man who doesn’t really give a shit about anything, aside from his own misery. He does what he has to, but it pains him that he’s any good at it. He enjoys what he does some of the time, but is simultaneously wracked with guilt at having done so. Or I don’t know, is the problem people are having with Spectre that Bond isn’t guilty and miserable enough? 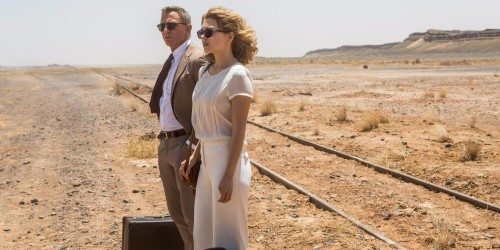 Bond and his lady wait for the plot to advance

What, I wonder, do people want out of a James Bond movie? The going concept with these past four movies is that they don’t want Bond to be Bond anymore. They want a cross between Bruce Wayne and Jason Bourne, and boy have these filmmakers delivered. But have they delivered enough? Does Spectre tilt ever so slightly in the direction of spy vs. evil mastermind, such that they who imagine the character has “grown” see a slipping backward?

Maybe I’m on the wrong track. Maybe Spectre is simply boring. But more boring than the last three Bond flicks? I don’t see it. They’re all of a piece. Like the others, Spectre has some amusing action set pieces, and a colorful opening sequence amidst a Day of The Dead parade, but that’s about it. It’s easy to look at the Dalton/Brosnan years and say, “well at least the Craig movies aren’t THAT bad,” but comparing turds is a losing game. Even the winners stink.

Spectre is nothing more nor less than a James Bond movie, one of a mere 24. It rolls along as well as most of them, is better than the worst of them, is far from the best of them, and, alas, can’t count itself among the handful so outrageously bad they’re grand. If you’d like to see a Bond movie, Spectre is, without a doubt, one of them. 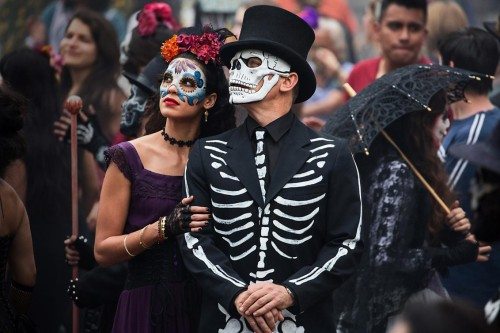 6 responses on “Spectre, One of Only 24 James Bond Movies”