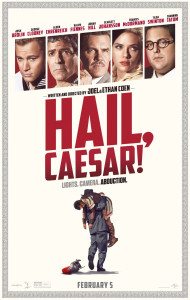 Opening in a church on a close-up of wooden Jesus on the cross, one might imagine Hail, Caesar!, the Coen brothers’ goofy follow-up to Inside Llewyn Davis, to have something to say about religion. It doesn’t, really, though an early scene with four religious reps and studio fixer Eddie Mannix (Josh Brolin) discussing the finer points of Jesus’s parentage and godliness is one of the funniest in the movie. Hail, Caesar! likewise has nothing to say about Communism, though its’ plot centers on a cell of Red screenwriters abducting numbskull Hollywood star Baird Whitlock (George Clooney) and introducing him to the plight of the common man.

But Barton Fink this ain’t. Calling Whitlock’s abduction a “plot” is a stretch. It’s something that happens, it’s something that worries Mannix, and in due time Whitlock is retrieved with no trouble whatsoever. As far as kidnappings go, even Bunny Lebowski’s was given more attention.

Nope, Hail, Caesar! isn’t about much of anything aside from having a good time. It’s the Coens goofing off, this time in 1951 Hollywood. And it’s pretty damn funny. Great cast, too, though few characters appear in more than two scenes, if that. Hail, Caesar! is less a story than a collection of vignettes. Not a bad thing, but not exactly memorable, either. 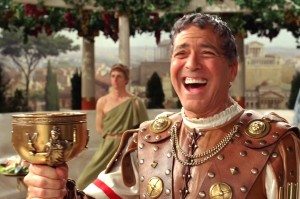 Drink and be merry!

So about that plot. Whitlock is shooting Capital Pictures’ big religious prestige picture, Hail, Caesar!, starring as a Roman centurion stunned by the truthful beauty of Jesus. He’s abducted by a bunch of Commie writers and held for ransom. Eddie Mannix, Capital Pictures’ fixer (inspired by, one presumes, real life studio fixer Eddie Mannix), has to fetch him back. But he also has to deal with the studio’s many other pictures and actors, and so he does, allowing the Coens to show us scenes from a slew of imaginary old timey movies.

They get to play with a western, an aquatic musical, a marines-on-leave musical, a drawing room melodrama, and the Roman epic of the title. They lean toward outsize lampoonings rather than genuine recreations. They’re ridiculous. Best of all is the melodrama directed by Laurence Laurentz (Ralph Fiennes), whose scene failing to teach singing cowboy star Hobie Doyle (Alden Ehrenreich) how to say “Would that it were so simple” is the highlight of the movie. 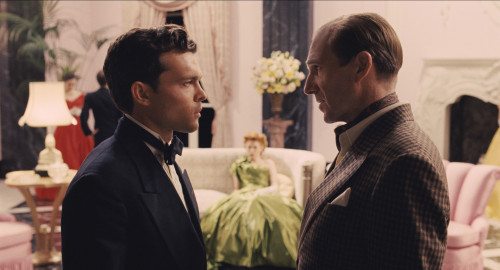 Would that it werrrrre so simple.

I don’t know who this Ehrenreich kid is, but he twirls a mean lasso, and more than holds his own against the rather more famous cast the Coens put together. There’s Scarlett Johansson as a chain-smoking, twice divorced mermaid, Tilda Swinton as twin gossip columnists, Channing Tatum as a song and dance man in the On The Town knock-off, Frances McDormand as a film editor, Patrick Fischler as a Commie writer, Wayne Knight as an oily Roman lutist and kidnapper, and Jonah Hill as a “person.” 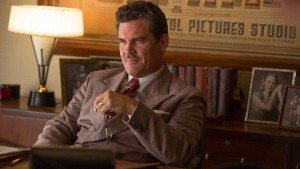 Everyone gives it their comedy all. They have to, since they’re only in a scene or two each. As Mannix, Brolin is the center of the movie, kind of a strange choice, really. Attempts to humanize him feel sort of weird and pointless. He’s trying to quit smoking. He’s nice to his bland, pretty wife. He’s being courted by Lockheed, but in truth, by gosh, he likes dealing with his children, i.e. his movie stars. As far as religion goes, the final lesson is that people who believe in isms are all rather silly, and if what you’re doing in life feels right, then that’s what you should do. It wouldn’t be hard to read the movie as the Coens defending their life and career as movie makers, but are the Coens really defensive on that matter? Seems unlikely.

I think it’s more reasonable to say they stuck in a simple message of “do what feels right” to give the movie at least a tiny hint of meaning, which I’d say is the last thing it needs. What’s wrong with making a dopey movie making fun of Hollywood, religion, and Communists? If they wanted their little message to reverberate, they would have needed a far more interesting character than Mannix at its center.

Not much more to report here. Hail, Caesar! is as ephemeral as Burn After Reading. It’s an excuse for the Coens to play around with old Hollywood cliches, so much so it’s like they’re riffing not on old Hollywood but on riffs of old Hollywood. It’s all broad strokes. It’s like another studio was trying to ape that Barton Fink feeling, and this is all they could cobble together. Should you see it? Don’t be ridiculous. Of course you should see it. It’s a Coen brothers movie. 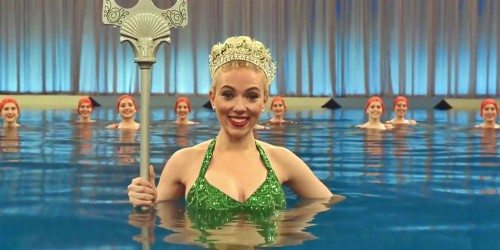