You can fret about it all you like, try to defund Planned Parenthood, or encase your daughter’s hoo-ha in a solid block of Lucite, but the truth is the truth: having sex is part of being an adult — and your little angel wants to grow up like right fucking now. Fucking right now. Right now, she’s fucking.

That’s how it was for you and how it will be for your children — assuming you’re an adult and you’ve had sex and from that sex emerged tiny little people who made you understand why children shouldn’t have sex.

Except they will have sex. Right now, probably. And why shouldn’t they?

If your answer to that question involves some convoluted and illogical treatise about sex being inherently wrong because Jesus’s disingenuous translator, or the Majestic Freeble, or your mom said so, please stick your pecker in an industrial thresher before you deliver it. If you think sex is only wrong for young people, well, please watch this Mind Control Double Feature and see if your thinking changes any.

For in this Mind Control Double Feature, we will take some time to hang with sexually active young ladies. 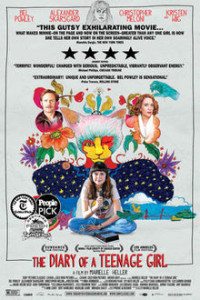 Supreme Being has already written a whole post about this film, which tracks the sexual awakening of one Minnie Goetze (Bel Powley), a 15-year old in 1976 San Francisco. In Diary, Minnie does what most teenagers do, which is make lousy decisions all of her own, so she can learn from those decisions and — with the sex — grow up.

In this particular case, Minnie starts fucking her mother’s (Kristen Wiig) boyfriend (Alexander Skarsgård), even though he’s twenty years older than her, shifty, and — as I mentioned — her mother’s boyfriend. This questionable decision leads Minnie down a rabbit hole of experimentation. It is a hole that goes disturbingly deep and which, undeniably, serves its intended purpose.

At the end of The Diary of a Teenage Girl, Minnie remains fifteen and yet simultaneously becomes older and wiser than any one else in her life. Through her actions, she grows old enough to understand what sex is; to see how love is entangled with but not wed to sex; and to learn that this morass is what makes and breaks adults. Of which she is now one. Because she started fucking. And too young, probably.

The Diary of a Teenage Girl is exceptional for its lack of judgment and for its honesty. This, the film says, is how it can be to be young and frustrated by youth. This is how being young likely remains, albeit with different and hopefully less extreme particulars, for teenagers today. Girls will have sex. Those girls may make poor decisions in the process, just as boys will, but well: tough.

If you judge them for it I’d suggest that says more about you than it does about them. 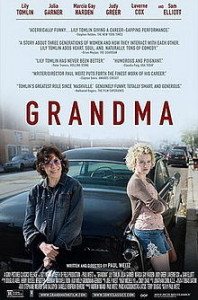 Immediately after you watch Minnie Goetze run headfirst into a flurry of fornication, cue up Paul Weitz’s feature Grandma. In this film, Lily Tomlin stars as the titular matriarch, Elle, a crotchety lesbian poet who, still wracked by her wife’s passing, estranges herself from most everyone. Just after she forcefully alienates her too-young girlfriend (Judy Greer), Elle’s grand-daughter Sage (Julia Garner) shows up on her doorstep.

Sage is pregnant. She has an appointment that afternoon to get an abortion but she needs $630 to pay for it. Neither lady has the bread.

Grandma then ostensibly tells the story of trying to pull together the necessary funds, but that’s not what it’s about at all. What it’s about is growing up, and the meaning of parenthood, and the repercussions of sex.

Sage has been having sex with her loser boyfriend. Not, in and of itself, a remarkably horrible decision. Getting pregnant? Well, that’s another story and one — precisely because it was such a dumb move — that is sure to help Sage grow up. We learn from our mistakes. The bigger the mistake, the greater the opportunity for growth.

But don’t get any ideas. You’ll make plenty of ghastly mistakes without trying.

Just as Sage’s youthful flailing bends her into the gnarled shape of a proto-adult, so too have Elle’s, and those of Elle’s angry, domineering daughter Judy (Marcia Gay Harden). They had the sex and from it, tiny little people came out to make them think that maybe sex isn’t such a great idea for tiny little people.

And yet: what else can one do? Everyone wants to grow the fuck up, and right fucking now, too.

Grandma gives Lily Tomlin’s Elle a lazy susan from which she can snarl, and spit, and gripe at pretty much everyone who’s ever deigned to allow her into their lives. Sam Elliott — late in the film — unlocks much of the story’s roots in a performance he hasn’t but should have been recognized for. Also present, Laverne Cox, for whom the word fabulous ought to have been invented.

It’s not The Diary of a Teenage Girl in terms of insight, or honesty, but Grandma does serve as a worthy and complex counterpoint. Experimentation with sex delivers results. Some of those are the ones we want and others, well, not so much.