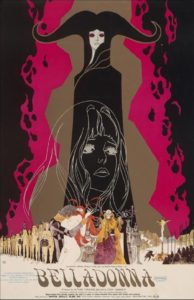 A swirl of pulsing, psychedelic Japanese watercolor sex and violence, Belladonna of Sadness (Kanashimi no Belladonna) is not going to be everyone’s cup of tea. But what a cup of tea it is! Hallucinogenic, impressionistic, hedonistic—it’s a whole lot of crazy. Your eyes and mind will be spinning with colors long after it ends. Originally released in ’73, it did not fare well, but lived on in the fringes long enough to be enjoying a current theatrical run before its release on blu-ray.

Based on the 1862 French book, La Sorcière (titled Satanism and Witchcraft in English), by Jules Michelet, Belladonna of Sadness tells the story of a young couple, Jeanne and Jean, marrying in some medieval village, only to find themselves a few cows shy of the marriage tax. Their evil Lord says no worries, he’ll be happy to rape Jeanne instead. And so he does, in a wild tableau of legs and blood and vampire bats, all to a groovy, spacey jazz-funk soundtrack that at times brings to mind the lilting watery sounds of Miles Davis’s In A Silent Way. 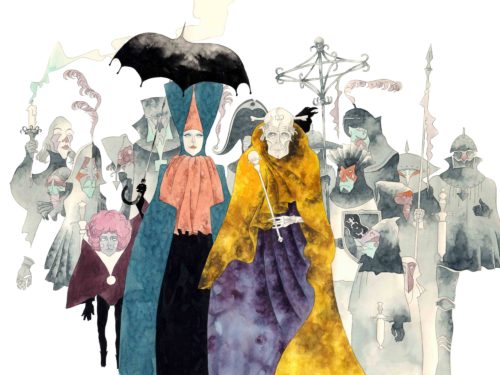 The friendly Lord and his retinue

Before long, Jeanne is tempted by a tiny bubbly penis devil into further sinfulness, and soon she’s taken over the village with her witchy powers. And the penis devil? He only grows larger, and rather more insistent, as both devils and penises are wont to do.

So on the one hand, we have a story wherein a woman is used and abused to the point she throws an entire village into a bizarre sexual frenzy I’d try to describe if I dared. In short, these are images you’ve not seen before. On the other hand, the point is to show how Jeanne, by throwing off the sexual repression of the era, becomes more powerful than even the Lord who raped her. It is, in its way, a film of female empowerment, made even more explicit by the (rather strange) connection made, at the end, between Jeanne and Joan of Arc. It’s just you have to get past a lot of rape on your way there. 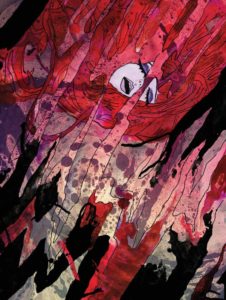 Eiichi Yamamoto directed and co-wrote Belladonna of Sadness for Mushi Productions, which promptly went bankrupt after its release. The animation style, though it has a Japanese flair, looks inspired by medieval European art and, at times, Gustav Klimt. Static images are mixed with undulating watercolors, psychedelic set-pieces alternate with simple, if not abstract, paintings, strange creatures are plentiful, and there’s no end to the sexual imagery. It’s not exactly pornographic, it’s all too artsy for that, but I wouldn’t recommend seeing it with grandma. Depending, of course, on the grandma in question.

This is a movie not like other movies, and for that alone, you must see it. You may not love it, but you’ll be weirder for having experienced it.

For you Bay Area denizens, Belladonna of Sadness is currently showing at the Alamo Drafthouse’s New Mission theater. For the rest of the world, it’s out there somewhere… 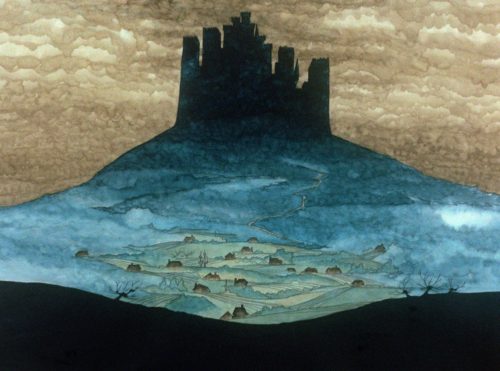 Nothing ominous to see here, move along