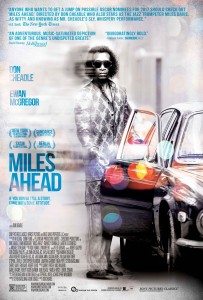 Like an early ’70s Miles Davis song, Miles Ahead the movie is a swirl of wild ideas with no real beginning, no real ending, and nothing whatsoever concrete to hold on to, but that nevertheless feels just right while it’s happening. Like “On The Corner,” or “Turnaround,” or “Right Off,” or “Funky Tonk.” Dangerous aimless rides through alien landscapes, as visual as they are auditory. Miles Davis is an impossible figure to pin down. Don Cheadle, who co-wrote, directed, and stars in Miles Ahead, doesn’t even try. Like Miles made music, Cheadle makes a biopic, pushing at the form, making it up as he goes, inventing as much as informing. It may not be entirely successful, but if nothing else, Miles Ahead is an original piece of work.

Cheadle had a hell of a time getting the movie made. After the Davis family pitched him a number of less than inspiring story ideas, he pitched one of his own: Miles as a gangster starring not in a movie about himself, but in the kind of movie, as the kind of character, he’d want to play. They liked the idea. Cheadle liked the idea. But who would write it? Who would direct it? No one but Cheadle, it turned out (along with his co-scripter, Steven Baigelman). Hunting up the money was a challenge. Not many investors wanted to risk making a non-standard biopic about a black jazz musician. Cheadle had to invent the character of a white Rolling Stone writer, Dave Braden (Ewan McGregor), to get the movie made. Welcome to Hollywood, folks. He also had to go the IndieGoGo route to help finance it (to which campaign, full disclosure, I donated to). 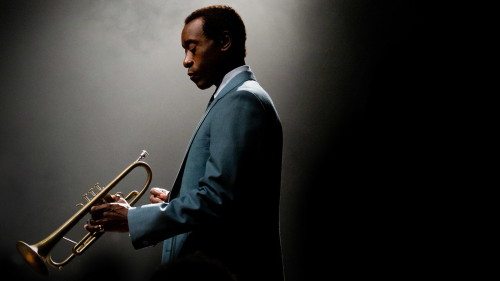 Cheadle as Miles in the early days

Miles Davis, as he put it himself, changed the direction of music five or six times in close to 50 years of playing. He lived an intense life, with no movie-friendly character-arc of struggle/success/hard times/rebound. How do you sum it all up in two hours? Cheadle chooses an interesting path. In ’75, Miles quit music, holed up to recover from a hip injury, did too many drugs, and vanished from the public eye. He started recording again in ’80, and touring in ’81. What intrigues Cheadle is why? What happened in those years? What brought Miles back?

Even limiting Miles’s story to this period, Cheadle doesn’t tell it like a reporter listing facts. Instead he fictionalizes Miles’s period of reclusion and rebirth, turning it into a sort of buddy cop, ‘70s action flick starring Miles and Braden, the reporter, in The Story of The Stolen Tapes, on which are Miles’s first recordings in years. Miles is Miles, but he’s also the character Miles, a badass out to get back what’s his. 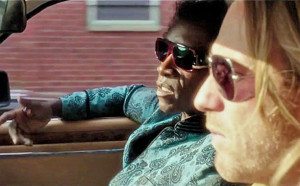 The buddies hit the road

Intercut with the action flick is the story of Miles meeting, marrying, and breaking up with his first wife, the dancer Frances Taylor (played by Emayatzy Corinealdi), from around ’58 to ’67, give or take. We’re here in more standard biopic territory, but only in that these are actual events from the life of Miles. The way they’re told is oblique and impressionistic. We see Miles and Frances meet, make love, argue. We see Miles playing in clubs (Cheadle and the band are actually playing, but it’s Miles’s music we’re hearing on the soundtrack), recording Miles Ahead (the album) with Gil Evans and their big band, rehearsing “Nefertiti” with the second great quintet. We see the infamous scene outside a club Miles was headlining where a cop, apparently not happy seeing Miles escorting a white woman into a cab, beats him over the head and arrests him.

Yet it all happens with little dialogue and nothing to identify years, characters, songs, or anything else outside emotional states. I am, as you may by now be suspecting, as a big a fan of Miles as can be, but if you’re not, you won’t know what album is being recorded (maybe I don’t either, is it Miles Ahead? Or is it Porgy and Bess?), you won’t know it’s Gil Evans, producer/arranger extraordinaire Miles is working with, what band is rehearsing “Nefertiti,” or even in what years this is all set. The clothes, the cars, and the haircuts will give you a clue, but that’s it. Cheadle isn’t telling the story of Miles’s life, he’s telling a story starring Miles with the vibe, the attitude, the feel of Miles’s life. 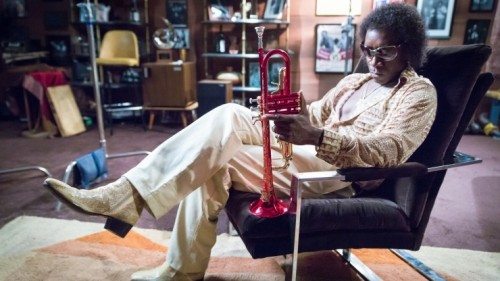 Miles gets his groove back

So why does Miles return to his horn? It’s something to do with his ex-wife, Frances, in Cheadle’s telling. The flashbacks to his romance and break-up are interwoven with equal parts precision and abandon. At one point action-movie Miles chases down the music thieves at a boxing match. As the scene plays out, late ‘50s Miles and the band appear in the ring, Frances is there and not there, his whole past is swirling around him, there’s a fist fight, a shoot out, it’s a helluva scene.

The movie’s most prominent character is the music. Cheadle is blessed with a subject whose output covers everything from ballads to bebop to flamenco to the craziest ‘70s jazz/funk ever put on record. Somebody should make a throwback ‘70s cop movie scored solely with Miles’s On The Corner recording sessions. I mean that’s exactly what Cheadle does for parts of Miles Ahead, but I mean a whole movie. It would be grand. Tracks from throughout Miles’s career are woven into the story in a way showing off Cheadle’s love and knowledge of the music. As a Miles fan, it’s a pleasure to hear these songs used so well.

Perusing other opinions of Miles Ahead, I see a lot of griping at the lack of coherent biographical info in the movie, at the songs not being played in chronological order, and especially at the fanciful action movie angle, and I’m left wondering, what kind of pedestrian, dull movie were these people hoping for? The only decent biopics about musicians are the weird ones, like Thirty Two Short Films About Glenn Gould. Or Lisztomania. Or This Is Spinal Tap. Usually the best you can say is that such-and-such an actor nailed such-and-such a character. 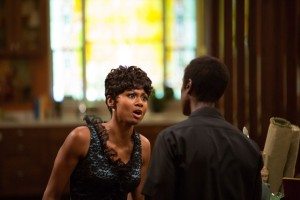 A not so happy Frances.

Suffice to say, Cheadle nails Miles Davis, both as the burned out, half-crazy ‘70s version, and as the too-cool-to-get-close-to late ‘50s/early ‘60s version. It’s not a warm, loveable performance because Miles did not present as a warm, loveable guy. As famous as he was, as much as has been written about him, no one but those who really know him know him. He’s an extremely enigmatic figure. Even his autobiography barely gets beyond the surface (in, I might note, the most entertaining way possible).

Simply put, this is a ballsy movie. It’s not perfect. Like I said at the top, it doesn’t really have an ending or a beginning. But if we’re going to have biopics in this world, this is how they should be made. With imagination. With originality. With balls. Miles Ahead is stylish, crazy, goofy, and most important, it captures the spirit of Miles Davis. If you know little about the man and his music, you’re not going to know it got his spirit right, so you’ll have to trust me (and Cheadle) when I say: The vibe you get watching this movie is the vibe of Miles. So dig it, motherfuckers. Dig it.

(For you Miles fans out there, this piece was written under the influence of Sketches of Spain and (a fraction of) The Cellar Door Sessions).

0 responses on “Miles Ahead, In Which Don Cheadle Channels A Genius”