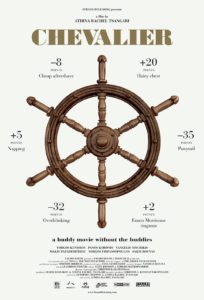 How, precisely, does one measure man’s value? In Athina Rachel Tsangari’s Chevalier, the answer is ‘relentlessly’ — an answer that is clearly correct. So stand up straight and, for god’s sake, tuck in those pyjamas.

In Chevalier, six grown men on a dive holiday play a game to determine which of them is the best. This game — played continuously — involves rating each other on how they do everything, on how they are at every moment. Scores are kept by each player, who notes points given or deducted in little notebooks. Did the Doctor belch at the dinner table? Score deducted. Has Yannis gone to sleep in a pleasingly symmetrical posture whilst wearing nice striped underwear? Plaudits deserved. Did you peevishly deduct points in your notebook when someone else unjustifiably compared you to a pineapple? 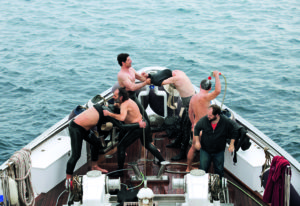 Gently, insidiously this game overtakes the ensemble. It does so because, no surprise, it is what they were doing all the time anyway, just without anyone being so open or aware of it. Each of them was walking the world comparing themselves to everyone else (or at least to every other man; Tsangari and Efthimis Filippou’s script leaves women unjudged).

Like The Lobster and earlier films by fellow Greek director Yorgos Lanthimos, Chevalier is darkly, cruelly funny in a way that is unlikely to make you laugh. In that, and in other fine ways, it also reminded me of the underrated, underseen Force Majeure, which likewise holds a yardstick up to the male gender and, finding the subject of its study lacking, whacks them with it severely. This is good fun and richly deserved and I, with ample self-depreciation and chagrin, enjoyed Chevalier considerably more than I might have anticipated.

You should watch it. 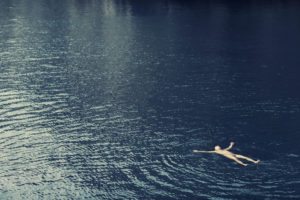 As a piece of cinema, Chevalier moves with the slow suck of the tides. It treads water in tidepools, half hidden and obscured by the gentle push-pull of waves. Cinematographer Christos Karamanis wields his camera shyly, capturing subjects from polite distance, never starring or crowding. Shots linger however, with curiosity that breeds more of the same. The aggregate effect is hypnotic. Lulling. So that when events do occur — especially small ones — they resound. The sound design also helps with this, avoiding cloying background music in favor of diegetic sound (that springing from on-screen sources) to keep ears attuned.

The cast — principly Yorgos Kendros, Panos Koronis, Vangelis Mourikis, Makis Papadimitriou, Yorgos Pirpassopoulos, and Sakis Rouvas — exhibit their character’s traits without much exaggeration. While one of the men is a momma’s boy oddball, like if someone made a homeopathic dilution of Zach Galifianakis, and another is an older, pedantic physician, most if not all feel like the sort of men anyone might end up with on a yacht — were one to ever end up on a yacht. 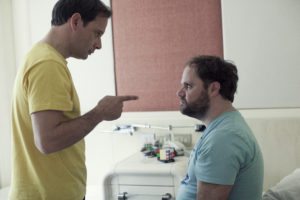 The men compete their way through their holiday. Sometimes they compete in contests of skill or, uh, physical endowment (should you be considering watching this one with grandma; don’t). Other times they compete like participants in Survivor or some other bizarre reality show that never begins or ends. In all ways, however, they try to one up each other. To out man the competition, which includes everyone.

That creates a certain kind of world — one in which we live. To see it vivisected so, with charm and rue by Tsangari, is a treat rich in umami. Chevalier offers no answers, it just asks the sort of questions we have been blithely failing to consider for all of our lives.

Who will be named the winner and receive the victor’s chevalier signet ring? It is not for me to say. Revealing the ending to a film, particularly one such as this, would cost me too many points.

And I still think I’ve got a chance of winning.