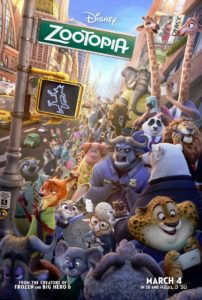 Zootopia feels like a movie with three directors, two credited screenwriters, seven “story by” credits, and something called the “Disney Braintrust” lurking behind every one of them, poking them with sticks when they err, and throwing meat at them when they do good. And it is that movie, every minute of it. It feels like bits and pieces of four or five different movies playing concurrently. I found it all rather baffling.

The city of Zootopia is a sort of Disney theme-park-land-ride, with animals pretending to be human living in various, improbably adjacent ecological zones, along with a tiny-rodents-land worrisomely accessible to larger mammals. All the animals, prey and hunters, big and small, live in harmony, aside, presumably, from those who don’t, which I guess must number quite a few given the size of the police force and the various nefarious characters we meet, including an evil arctic shrew doing a Don Corleone impression for the delight of all you parents out there. 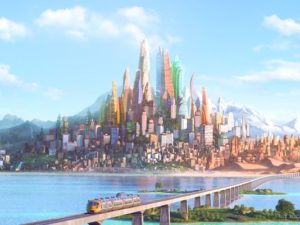 If animals built a city, it would look just… like… this?

Into this world bounds Judy Hopps (Ginnifer Goodwin), a bunny intent on being a police officer in the big city, the first bunny ever to do so. She believes that anyone can be anything in Zootopia. This is the theme of one of the movies out of which Zootopia is made, one that popular-singing-person Shakira sings a generically terrible song about more often than I care to recall. Another Zootopian theme is racial tolerance, more or less. Specifically, tolerance by the majority population of prey to the minority population of predators. One wants to find the analogy to our human world in such a set-up, but Zootopia is entirely confused as to what, exactly, it wants to be saying, though whatever it’s saying it’s saying it very loudly.

Judy, new bunny cop, is assigned to parking ticket duty, which job she’s so good at I wanted to catch her, fricassee her, and eat her. Note to filmmakers: showing your lead’s mastery at giving out parking tickets is not going to endear her to viewers. 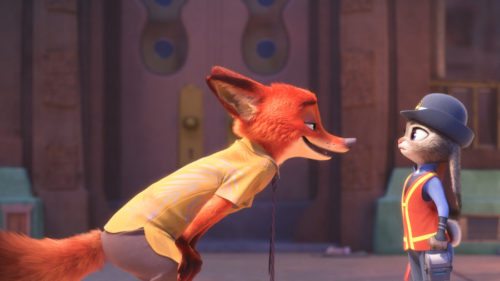 Judy makes friends with a fox, Nick Wilde (Jason Bateman), and soon they’ve teamed up to find a missing otter by the name of Emmett (an in-joke for you Jim Henson fans). So by now the movie’s a cops-investigating-a-mystery-disappearance movie, or wishes it were. The investigation plays out in a way I imagine is just fine for anyone under eight. Nothing wrong with that! Eight-year-olds gotta watch movies too, and in the world of cartoon movies for kids, you could do a lot worse than Zootopia.

For example, Bee Movie (’07). Twenty minutes of which recently liquified my brains. A talking bee falls in love with a human? How are they going to—? I worry there are children who will watch such a movie and begin to ask perfectly reasonable questions no parent wants to answer.

No bees in Zootopia. Mammals only. Hm. Given the intolerance angle, this strikes me as an oversight. Or set-up for a sequel? Zootopia 2: Six-Legged Boogaloo. You read it here first. 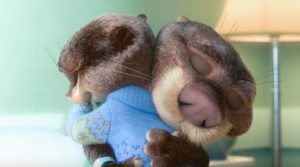 So. Missing otter. The basic mechanics of an investigation take place, the fewest number of scenes needed to get us from point A to point B exist, but they feel perfunctory. The upshot is that animals—but only predators—are going “wild,” i.e. acting beastly instead of humanly, the prey are outraged, and the predators are being ostracized and kicked out of jobs and whatnot. Judy, in what is played as an offensive explanation, tells the press it’s only happening to predators because of their biology. Which, sure, here in real-world-human-land, that’s the kind of pseudo-scientific explanation causing all the trouble. But in Zootopia? Isn’t that exactly true? Predators are indeed biologically predisposed to be predators. This is why they are predators. Seems pretty self-explantory.

If you’re eight? I wouldn’t sweat it. The animals are funny looking, there’s some good gags (the sloth DMV scene is the best, too bad the whole thing was shown as a trailer), the story zips along like a ride at Disneyland, and no bees molest nice human ladies in Central Park.

If you’re not eight? To not be scratching your head at the confused attempts at analogy is to be doing it (your head) a disservice. 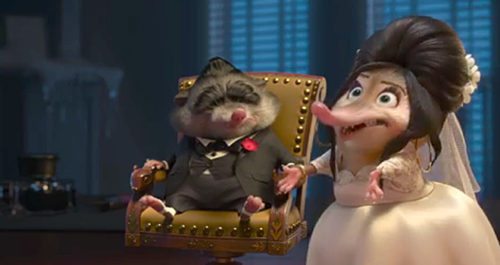 Anyway, the predators aren’t going wild for reasons of DNA, it’s all a plot, you see, in which predators have been given a drug made from blue flowers and—wait, blue flowers? Rows and rows of them? Am I really supposed to be thinking of Philip K. Dick’s genius drug novel A Scanner Darkly watching a Disney flick? This seems a strange choice of reference. Which they make stranger still by referencing a more recently famous blue drug, the blue meth of Breaking Bad.

Okay. So predators are being forcibly dosed with Heisenberg Meth/Substance D, turning them into “animals,” such that good citizens slide away from predators on busses, send them to work in the basement, yell at them to go back to the jungle, etc. Analogy-wise, this is a dangerous mess, one I feel like wading into will only result in psychic damage to writer and readers alike.

Zootopia is too much a factory-produced, carefully inoffensive, zippy kid-friendly cartoon flick to worry about its strained and muddle-headed attempts at addressing real-world issues of intolerance. If the take-away for kids is “treat everyone with respect, no matter your preconceptions,” I suppose one can’t get too up in arms about it. 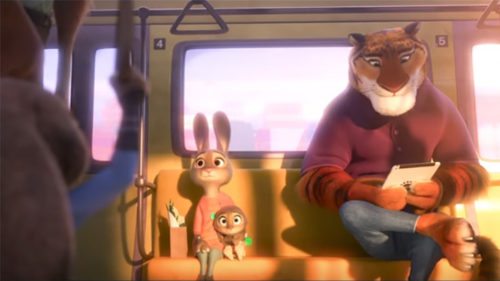 Moments before the bloodbath

Nonetheles, when I say it baffled me, I don’t mean the plot and I don’t mean the feel-good message about predators being nice at heart and bunnies being cops. That’s all clear as anything the Disney factory produces. I mean the mismatch of scenes and moods and meanings, the feeling that the movie was put together at the corporate level with an assortment of the many scenes from the many different drafts by the many different writers. I mean the sense that the makers of the film don’t have anything close to an understanding of their message. I mean the way I watched the whole movie with this kind of crooked expression and no idea how to answer Mrs. Supreme Being’s oft-repeated question, “What the hell is this?”

Cripes, now I’m back to slamming the nice cartoon movie everyone loves. It’s not so bad. After all, there’s a female lead who isn’t a princess, who doesn’t need a husband to be complete, who doesn’t even have a love story; her only goal is to be a great cop and a nice bunny. Things could be worse in corporate cartoon-land. 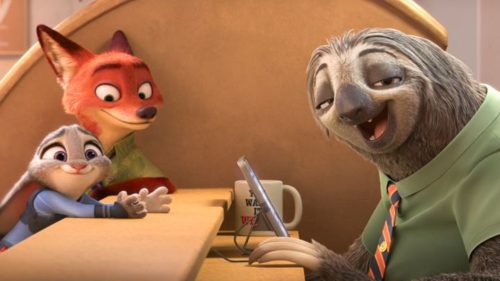 Flash the sloth tells a joke

4 responses on “In Which I Am Baffled By Zootopia”