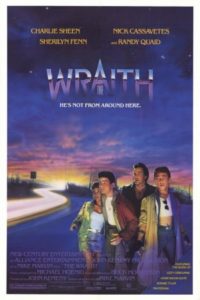 It’s 1986. I sit in a theater in San Jose with my future-wife. We are about to watch The Wraith for the very first time.

We exit the theater after 93 minutes.

“So…,” she begins, but I shake my head. It’s too soon to try to process The Wraith. It needs time to gel, to coalesce into something coherent.

It’s the mid-1990’s. The Wraith is on the television. I watch it, confused, apprehensive, perhaps a bit fearful that my sanity is slipping away. I’ve seen this before, I think. But my hazy memories are a fever-dream of desert highways, crashing cars, and puffy hair.

It’s 2004. My wife buys me The Wraith on DVD. It’s in standard format with no special features but it’s all we have. It’s all. We. Have.

I have no idea what she was thinking. It can’t be a film that has aged well, can it?

There’s only one way to find out.

It’s 2016. I’m writing about The Wraith for a head-exploding cinema blog, a concept unheard of in 1986. Blogs, that is. Cronenberg gave us head-explosions in 1981. I have watched the special edition DVD, the picture rightfully returned to its widescreen glory. Thirty years encompassed, encircled, perhaps embraced, by The Wraith. 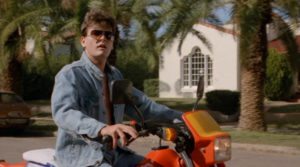 Shot in January, 1986 and released in November of that year, The Wraith stars a very young Charlie Sheen, and co-stars Sherilyn Fenn, Nick Cassavetes, Clint Howard, and Randy Quaid. It was not a particularly successful film, and quickly made its way to VHS and LaserDisc, where it started to build a small cult following.

Is it a hidden gem, taken from the big screen too soon by a cold, unfeeling studio unable to recognize its brilliance? Or is it nothing more than an easily forgotten trifle? Well, the truth is… it’s neither.

There are some who say that The Wraith makes no sense, that the story could be scrawled on the back of a cocktail napkin with room left over for a game of hangman. They are not entirely wrong. The Wraith tells a simple story — it’s a “man returning from the grave to wreak unholy vengeance” tale, but instead of a grim-faced cowboy (such as Clint Eastwood) the avenger here is puffy-haired and perky.

The Wraith leaves a trail of carnage in his wake but he never lets it get him down. This is 1986 after all. Bright colors and peppy music dominate, making The Wraith a distinctive entry into the revenge-film category. 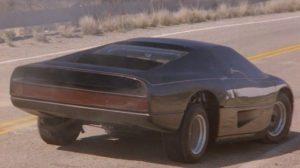 So yes, The Wraith is about a man who returns from the dead to kill his killers. He does this by magically appearing as several balls of light which coalesce into a Dodge M4S Turbo Interceptor with a mysterious figure in black leather at the wheel. This helmeted road demon occasionally wields a shotgun with blinking red lights on it. He crashes into things; things crash into him; he turns into a pretty light show; he shoots things with his shotgun and stuff explodes.

Pretty Wraith-y stuff, if you think about it. Providing you’re not thinking too hard.

It all may sound like any given movie in the Fast & Furious franchise, but those movies have a discernible if flimsy logic to them. They take place in a barely recognized but common landscape that may take a back seat to bulging muscles and speeding cars, but it nevertheless exists. Not so The Wraith.

Our titular Wraith lands in the middle of a desert where the only burgeoning business is a drive-in diner called Big Kay’s. The only adults are law enforcement officers. It’s as if The Car crashed into Massacre at Central High. There are no rules here. 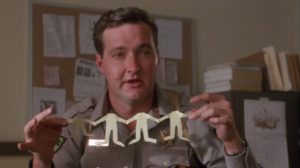 Nick Cassavetes’ Packard Walsh seemingly runs this strange town’s small underworld — made up of twitchy punks and former high school lettermen — simply because he’s the one with the switchblade. Clint Howard’s Rughead takes the form of a brilliant mechanic, able to come up with electrical doodads and whatchamacallits on the fly, but he works for Packard in a remote warehouse because there is nowhere else to go. The town consists of nothing but a few houses, the aforementioned diner, and the interior of a sheriff’s office.

Yes. Just the interior. Is there an outside? Is there escape? Not from The Wraith.

The sheriff, Loomis (Randy Quaid), is incompetent at best. He questions but never arrests.

Into this environment speeds the Wraith. Played in his scant unhelmeted moments by Charlie Sheen, the Wraith is less of a character and more of a plot device. Instead, the car itself is the true star (MA-SHEEN!) for much of the film, appearing out of nowhere to destroy a co-star or two before once again vanishing into the distance.

When Sheen does appear, whether on his Honda motorcycle, on the shore near the river, or at the diner, he comes cloaked in mystery. Who is he? Where does he come from? And, most critically, how does he keep his hair so damned fluffy under his helmet? 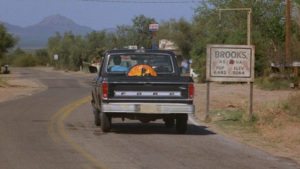 The sign lies. I doubt Big Kay’s employs enough people to sustain that kind of population.

The Wraith makes only superficial attempts to answer these questions. Suffice it to say that Sheen’s character (sometimes called Jake Kesey) is the returned spirit of a young man killed by Packard Walsh & Co. He looks kinda/sorta like his dead self, except far more Sheen-y, the better to make one believe in his divinity.

He comes from somewhere else, presumably an afterlife in which retribution is best served behind the wheel of a Dodge. Like if Heaven were run by Lee Iacocca. And his hair, so fluffy, so flawless, so ’80s. The secret to its perfection gets revealed late in the film when we finally see Sheen magically transform from a leather-suited harbinger of violence into totally rad Jake Kesey with no muss or fuss.

If the car is the star, Sheen’s hair deserves second billing. It’s the performance of a lifetime. 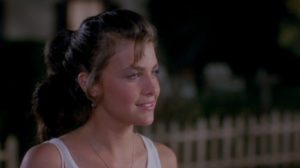 In the 1980s, killing for Sherilyn Fenn wasn’t so ridiculous.

Jamie, the dead young man (the pre-Sheen, if you will) had a brother, Billy, and a girlfriend, Keri (Sherilyn Fenn), who served as the impetus for Packard to commit murder in the first place. Both characters work at Big Kay’s, of course, Billy sweating behind a hot grill while Keri is a roller skating waitress. At one point in the haze of the film Sheriff Loomis questions Billy about his dead brother, asking questions that one would assume he knows the answer to already. Since he’s, y’know, a cop. An incompetent cop who can’t solve a single murder in a tiny town.

He’s no Angela Lansbury, is what I’m saying. 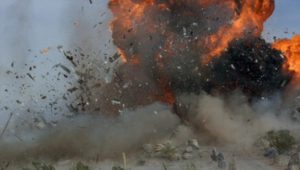 I think it’s your timing belt.

Believe it or not, The Wraith has a plot. It ain’t much, but here it is:

Packard Walsh’s gang forces unwary drivers to drag for the ownership of their cars. The Wraith takes one of them on, forces him to crash and burn, and disappears again. That’s the gist of the action in the movie, although at one point the Wraith simply drives into Packard’s warehouse and explodes. Rughead survives to tell the tale to Sheriff Loomis, and then exits the film. That leaves Packard as the only target left for the Wraith — who could have possibly seen that coming? They have their inevitable showdown on the familiar desert highway, with predictable results. 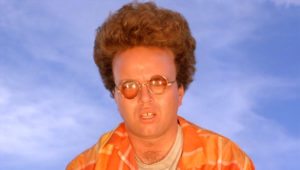 Look into my eyes. Obey my command. Fetch me more Cheez-Whiz.

So it’s 2016. The Wraith premiered thirty years ago. I’ve seen it more times than I’ve seen Ran, or Psycho, or even Jason X. Something in the film keeps drawing me back. I’d like to think that it’s something deep, like a rich theme. Or even spectacular, like big-ass ‘splosions. But in truth I like it because it’s bright and shiny and stupid. There’s no need for complex characters or sequel-setting plot devices when you’re ghosting down the highway with perfect hair.

The Wraith may not be a good film, but it is entertaining. There are some nice explosions, the Turbo Interceptor is cool, the music isn’t bad, and Clint Howard’s hairpiece is a thing of true beauty.

I look at it as a time-capsule — a 90-minute return to 1986. Whatever else may be lacking in the film (characterization, logic, giant man-eating fireflies), there is an accuracy to it, a tiny bit of what the mid-1980’s were like, especially if you lived in a small town.

And if you’ve ever had to contend with a fluffy-haired ghost in a bitchin’ car — and who among us hasn’t?

Raised by a pack of Outlaw Clowns, Zombo left behind a life of tiny cars and Clown White in favor of a more mundane existence. That lasted two days. He now wanders the West, teaching the ancient art of Clown-Fu to a new generation. He also watches far too many bad movies, and is firmly convinced that Death Race 2000 is a documentary.

12 responses on “The Wraith: An ’80s Tale of Fluffy-Haired Revenge”